Through culinary mastery and grit, Danny Lledó has clinched a Michelin star with Xiquet.

Danny Lledó should have failed. At the very least, the odds were stacked against him. The D.C.-based chef opened his Spanish fine-dining restaurant Xiquet two weeks before the pandemic hit the U.S.

Still, Xiquet has survived—even thrived—since opening. This spring, it received a Michelin star, making it the first Spanish restaurant in the U.S. to attain such an accolade. 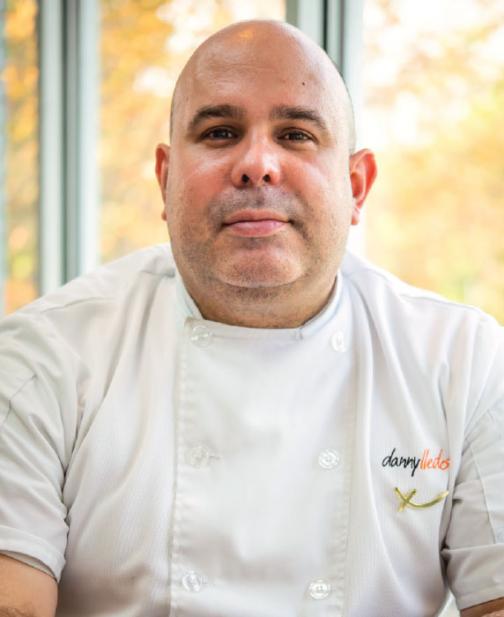 Restaurant industry in a word: Experience

Chef you’d most like to work with: Quique Dacosta (Michelin–starred chef behind the eponymous restaurant in Dénia)

Hope for the post-pandemic future: Unity in the restaurant industry to create a bigger voice

Lledó’s path into the culinary world wasn’t exactly linear, but food as well as an appreciation for farm-to-table sourcing permeated his childhood. He hails from a family of farmers and fishermen, and his Spanish father worked as a chef in Dénia, Spain, while his Portugese mother was known for her exceptional cooking and baking. Suffice it to say, Lledó never had a bad meal growing up.

“Hospitality was in my blood,” he says.

Although born in Maryland, Lledó connected with his roots while living in his father’s hometown of Dénia (near Valencia) during his childhood years. The Xiquet name (pronounced chee-kett) is in honor of Lledó’s father, who would always call his son “xiquet de casa,” a colloquialism meaning local boy. To Lledó, it communicates the feeling of pride that his father had for him.

After graduating from the University of Maryland College Park, Lledó began a career in financial consulting, but his heart remained in restaurants, which had always been integral to his life.

Lledó started working as a dishwasher when he was 13 and continued in restaurants throughout college. He worked under chef Yannick Cam at Bistro Provence in Bethesda, Maryland, and had stints at Taberna del Alabardero in D.C. and the Miami outpost of Sobrino de Botín before landing another enviable gig—this one under acclaimed chef José Andrés at Café Atlantico and minibar in D.C. During his tenure, Lledó grew to appreciate Andrés’ pursuit of excellence and dedication to giving back to the community, both of which have shaped how Lledó cooks and how he runs a business.

Now in his own establishment, Lledó presents the warm Mediterranean hospitality and flavors of traditional Dénia cuisine, with a heavy focus on seafood, rice, and paellas. Guests can even glimpse the dish preparation; the kitchen, which uses multiple wood fires, is enclosed in glass.

Upon purchasing the restaurant, he realized he could pursue his dream of opening a paella-centric restaurant by converting Slate Wine Bar’s upstairs office space into an entirely new concept. Thus, Xiquet was born.

Lledó says that within Xiquet’s tasting menu, every dish builds upon the others, and the overall progression of the meal pulls many elements together to deliver a balance. During the pandemic, this artistry as well as the restaurant’s ambiance and hospitality were dampened.

“I love to welcome you into my place,” Lledó says. “You see it in my eyes when I tell you, ‘Thank you for choosing to dine with us today, to celebrate your anniversary, your birthday, your promotion. We thank you. I hope you enjoy the experience.’ We’re selling an experience. We’re not selling products.”

Lledó is transparent that surviving the pandemic as a restaurant was about having the financial resources and structure to get through it. He took a financial hit but was able to make it to the other side. “That’s the combination of my Mediterranean passion and my American spirit of not wanting to lose and wanting to win,” he says.

For Lledó, the situation he faced in opening Xiquet weeks before a global pandemic is not unlike the many challenges people end up facing in life.

“Hey, you got what you wanted. You got your dream restaurant,” Lledó says. “Looks nice and beautiful, doesn’t it? Nice and shiny. Oh, coronavirus hits. Are you just going to give up?”

His answer was unequivocally no.

Instead, Lledó got creative and pivoted. He offered Zoom paella cooking classes that drew hundreds of participants. Xiquet also sold wine and dessert to pair with the cooking classes and partnered with local high schools to fundraise for sports teams.

But the future is starting to look brighter. In April, Xiquet received a Michelin star, which has taken the restaurant to new heights in terms of recognition and popularity. During the summer, the shift away from restrictions brought in even more business, as reservations grew in step with vaccinations.

Now the challenge is to continue to deliver at the highest possible level.

“Maintaining a star is a challenge,” Lledó says. “It’s not the same as getting a star. It’s more difficult to maintain it, but … we want to see the growth of Xiquet, to push the limits and see how far it can go and how awesome we can be.”

Lledó says in the future, he plans to unveil a new concept, a Portuguese restaurant that will be in his mom’s honor this time.

Are There Too Many Virtual Restaurants?
Qu Introduces Protective Redundancy for Restaurants with Commerce Cloud
Restaurant365 Appoints Two New Executives