The pair have contrasting, yet complementary personalities that have translated into James Beard Award nominations.

Best friends and business partners Dan Jacobs and Dan Van Rite don’t argue over much. The James Beard–nominated chefs, who together run standout Milwaukee restaurants DanDan, EsterEv, and Fool’s Errand, describe their pairing as yin and yang and say the partnership works because of their contrasting yet complementary personalities. In fact, Midwestern football teams might be the biggest point of contention in their relationship.

“There’s a certain amount of give and take, and there’s definitely the willingness to compromise,” says Jacobs of their working relationship. “The most important thing is we have similar views on how we want a kitchen run.”

While the old adage might warn of too many cooks in the kitchen, it’s far from the case for Jacobs and Van Rite, who believe working together gives their operation a leg up. “Four eyes are better than two,” Jacobs says.

The partnership has helped bring national recognition to a city that regularly plays second fiddle to Chicago, just an hour and a half south. This year, four out of the 13 James Beard semifinalists for Best Chef: Midwest run Milwaukee restaurants, including Jacobs and Van Rite, who shared the nomination for EsterEv. (Milwaukee clinched an additional five spots in the semifinalist list, including Outstanding Chef and Outstanding Restaurateur.)

Their first concept, DanDan, opened in summer 2016 and features a variety of dim sum dishes, dumplings, and other traditional Chinese fare. Noodles, like dandan, a Sichuan dish paired with ground pork and chili oil, also make an appearance on the menu. Perhaps one of the restaurant’s biggest draws is the three-course Peking Duck, with wonton soup, duck breast with scallion pancakes, and duck leg chow fun. 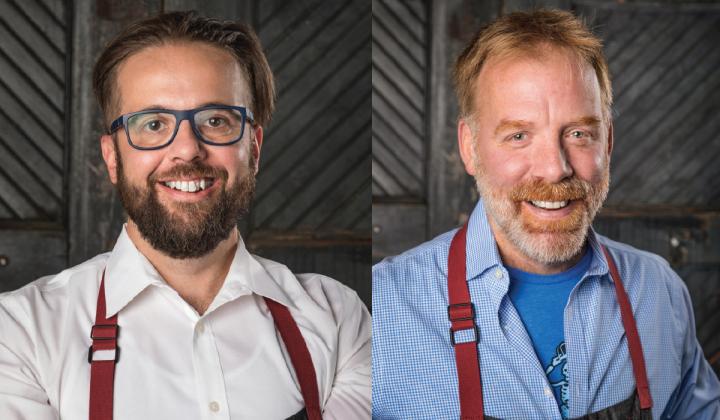 Their second restaurant, EsterEv, followed just a few months later in November 2016. Named after the chefs’ great-grandmothers Evelyn and Ester, the fine-dining concept is located within DanDan and styled as an intimate dinner party for 20 guests at a given time. The menu changes regularly, but past dishes have included steak tartare, caviar tater-tot tomato consommé, and house-made raviolo filled with ricotta, spinach, and quail egg and drizzled with brown butter.

One of the ways Jacobs and Van Rite have raised the bar in Milwaukee is through the guest chef series at DanDan and EsterEv, which brings in culinary talents from other cities. The series features chefs from across the country, like Nashville, Tennessee’s Bryan Lee (Butcher & Bee), Chicago’s Jason Hammel (Lula Café), and New Orleans’ Mason Hereford (Turkey and the Wolf).

“It’s fun for everybody,” Van Rite says, adding that some of the guest chefs are old friends, some new acquaintances, but all are given free reign over the menu during their visit. The guest series varies slightly at the two restaurants. EsterEv is more upscale and intimate, with seating for only 20. The dinners are curated by the visiting chef and assisted by the EsterEv staff.

The guest chef events at DanDan, known as Dim Sum + Give Some, feature seven-course, dim sum–style meals whose proceeds go to the nonprofit Kennedy’s Disease Association. Jacobs was diagnosed with the rare neuromuscular disorder in 2016, prompting the kickoff of Dim Sum + Give Some the following year. So far, these events have raised more than $85,000. This year alone, Jacobs and Van Rite aim to raise $35,000.

Through the guest chef series, Jacobs and Van Rite also have the opportunity to showcase the best of Milwaukee to their visiting peers. Both chefs speak highly of the local ingredients, particularly dairy and produce, from surrounding farms. Their hope is that a James Beard win could catapult Milwaukee into the national spotlight.

“Showing off the city … that’s really important,” Jacobs says. “If anybody from Milwaukee wins, we all win.” That outcome is highly possible. Jacobs and Van Rite didn’t advance to the final round, but as of press time, half of the finalists for Best Chef: Midwest were from Brew City, with the other half hailing from Minneapolis.

If the duo are emblematic of the quality of the Milwaukee food scene, they also reflect its resiliency. Although DanDan and EsterEv were able to ride out the shutdowns and dining restrictions, their French comfort foods spot, Fauntleroy, was an early casualty of the coronavirus. But the closure didn’t stop them from creating an entirely new concept.

In spring 2021, they debuted Fool’s Errand, so named because, as the pair points out, who would open a restaurant in the middle of a pandemic? The new restaurant was the answer to shifting wants and needs during the pandemic, but it’s proving to have staying power, thanks to comfort foods like the fried bologna sandwich, monte cristo, and biscuits and gravy.

In the gap between Faunleroy and Fool’s Errand, Jacobs and Van Rite continued to pay the salaries of roughly a dozen employees.

“We’re both really proud of that,” Jacobs says. “The predominant thing that Dan and I did the last two years is find ways for people to keep working. Was it to our own detriment? Yes, but at the same time we wanted to keep our team together as much as possible.”

That same set of values recently guided Jacobs and Van Rite in their decision to add a 20 percent service charge across their restaurants in lieu of tipping. This added fee ensures both the front and back of house earn a livable wage; it also opens the door to other benefits, like 401(k) plans and health insurance. Full-time employees also earn 10 days of annual paid vacation.

“It’s time the industry paid people like the profession it is,” Jacobs says. “We’ve seen probably 60 percent of people leave an additional tip on top.”

Though the business partners share many projects, they’ve each received accolades in their own right. Van Rite has been a semifinalist for the James Beard award multiple times, and Jacobs trounced Bobby Flay on the Food Network series “Beat Bobby Flay.”

Still, there’s something special about sharing in their accomplishments.

“I love it,” Jacobs says. “Who wouldn’t want to be successful with their best friend? I don’t think it takes away from anything individually whatsoever. I feel like we’re stronger together.” And Van Rite agrees.

Just don’t ask them to agree on whether to cheer on the Chicago Bears or the Green Bay Packers.

“We do not see eye to eye on football,” Jacobs says. “It gets to the point of almost arguing during football season.”