“Union Kitchen isn’t a brick-and-mortar space, but a mobile kitchen that sends a beacon of where we’re from," says Chef Yia Vang.

At Union Kitchen’s pop-up dinners, every Hmong-inspired dish comes with a story. Chef Yia Vang comes with many.

Vang was just 5 years old when his family came to the U.S. from a refugee camp in Thailand where he was born. As part of the indigenous Hmong people that had settled in the hills of Laos, his family faced conflict and persecution by both the Vietnamese and Laotians during the simultaneous Laotian Civil War and Vietnam War of the 1960s and 1970s.

In 1989, Vang and his family landed in central Wisconsin, where he attended school. His college years were spent studying interpersonal communications at the University of Wisconsin-La Crosse. But it wasn’t his ultimate destination.

Vang’s father worked first as a woodworker, building homes, and eventually went into welding, a profession from which he is newly retired. “His whole life has been about his hands,” Vang says. “I guess I got that from my dad, because I’m the only one in family doing hands-on [work]; everyone else is an academic.”

A self-taught chef, Vang got into cooking after working part-time during college at an Italian fine-dining restaurant. It was his experience helping out in the kitchen while working for a nonprofit supporting teenagers from broken homes that sealed the deal on the career change. He ended up moving to the Minneapolis area, managing the kitchen at his church, Bethlehem Baptist Church, and eventually sought professional cooking experience in the kitchens of Nighthawks, Borough, and Spoon and Stable before setting off on his own. 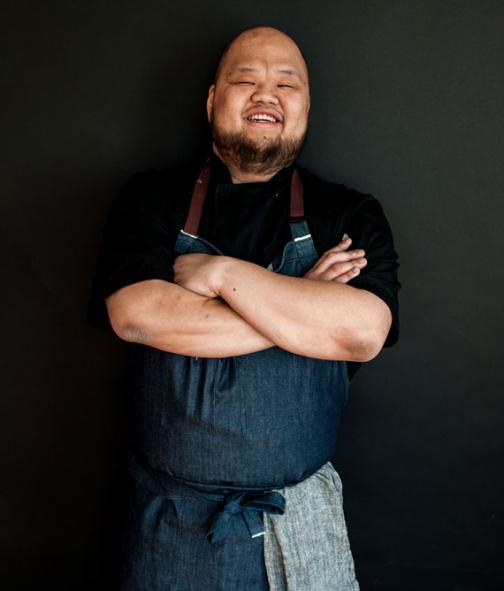 “Union Kitchen isn’t a brick-and-mortar space, but a mobile kitchen that sends a beacon of where we’re from,” Vang says. He uses this platform to educate people on the deliciousness and beauty of Hmong food.

“Hmong food doesn’t really have a cuisine—it’s more of a philosophy,” Vang says. “Hmong food is all about sharing with friends and family. And I don’t mean the kind of pretty small plates or tasting menus you’ll see at restaurants nowadays. It’s all about simple cooking, not foams or sous vide. It’s more about grilling meat over a wood fire and using a big pot to steam rice.”

One dish he calls Purple Sticky Rice with Meats tells the story of Vang growing up in Wisconsin, going to KFC and Famous Dave’s with his Hmong friends, eating meat, and thinking everything would be better with purple sticky rice. During dinners, he’ll serve big bowls of the rice with different sauces, pieces of wood-fired pork and chicken, some bok choy or local mustard greens lightly cooked in broth, and—very important—a pungent pepper sauce made by blending hot chili peppers with lime juice, garlic, unfiltered fish sauce, oyster sauce, and shallots that he playfully calls his Tiger Bite sauce.

“The word for ‘tiger bite’ is actually a swear word in our language—I would never say it around my parents—so it’s kind of a joke to call it that,” he says.

Pork is also an important staple in Hmong cuisine, so Vang’s knowledge of butchery comes in handy. “Every Saturday morning at 6 a.m. as a family we would go out to a friend’s farm. My dad would kill a pig, and we would have to break it down back at home,” he says. “It was perfectly normal that Dad would line the garage with a bunch of plastic sheets, and my brother and I would start breaking down the pig on a table with butcher knives.”

“It was all very Dexter-ish,” he says, referring to the popular TV serial killer. “No cereal, Pop-Tarts, and Saturday morning cartoons for us. But it was an honor to be able to go out to the farm. Even in college, I would butcher whole chickens and my friends would ask, ‘How do you know how to do that?’ And I would say, ‘how do you not know how to do it?’”

Vang found many of his family’s customs were not so common in the Midwest. “We eat with our hands a lot, and I’ll watch some of our guests eat sticky rice with a knife and fork and think that’s so weird,” he says. “Hmong people just roll up a little ball of the rice and use it to scoop up meat and sauce. In the hills of Laos, maybe you have three spoons in the family, but that’s it. When my girlfriend and I first started dating, I used to tear up a chicken with my hands and literally shovel food in my mouth. She would look at me like some kind of caveman.”

These days, Vang has been spending more time in the kitchen with his mother, recording her dishes and writing down recipes. One dish, which literally translates to “boiled chicken,” is a simple, whole chicken stew with various herbs like culantro (cilantro’s more aromatic cousin) and lemongrass among other herbs. The soup is eaten for medicinal purposes. For example, it is made by the mothers to help their daughters heal after childbirth.

Vang’s favorite dish as of late is baked fish in banana leaves. He buys fresh, local Minnesota walleye from Native American fishing tribes, wraps the whole fish up with lemongrass, ginger, and garlic in banana leaves, and throws it onto a live fire or grill.

“When you eat food, it evokes memories,” he says. “When I cook for others I want to either jog a memory or share one of mine. Through Union Kitchen, we cook, we teach, and we host. We believe that all of our food has a narrative.”