Chef Troy Guard sees plenty of runway ahead for Los Chingones, given the popularity of the Mexican cuisine category.

The award-winning restaurateur is ready to scale Denver-based Los Chingones.

Chef Troy Guard enjoys the process of building new concepts from the ground up. What started with a single fine-dining restaurant, TAG, in Denver in 2009 has blossomed into an umbrella group of eight distinct concepts, ranging from fast casual to high-end and everything in between. But for as much as Guard relishes starting from scratch, he also recognizes the potential in scaling.

“I’m very creative and want to try new things and my investors were cool with that. Now they’re like, ‘OK, Troy, we’re 12 years into it. Why don’t we pick the top brands and focus in on those?’ Los Chingones is definitely one of the brands,” Guard says.

The other three potential growth vehicles under TAG are breakfast spot HashTAG, bowl-centric quick casual Bubu, and steakhouse Guard and Grace. But out of the quartet, Guard thinks Los Chingones is especially ripe for expansion. As he points out, Mexican cuisine is near universally beloved in the U.S.—a sentiment that’s enhanced by the brand’s casual, funky atmosphere and relatively low check averages. 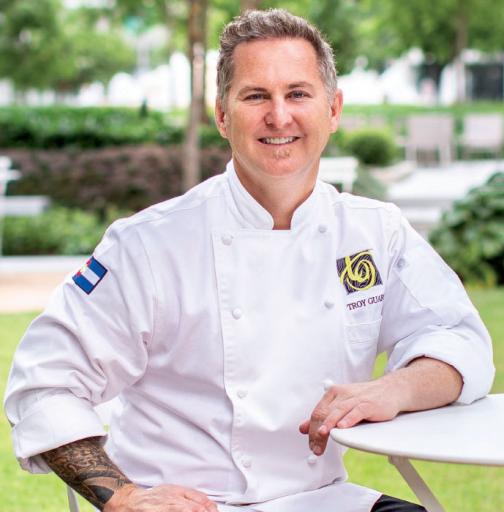 “I definitely think casual Mexican has some legs to grow,” Guard says. “[It’s] something you can eat every day. The flavors are very bold and fun and impactful. I also think what we’re doing is a casual take, so no matter if the economy is booming or if it’s bad like last year, people still have to eat and the price tag is very approachable.”

Still, Guard says, some guests balk at the cost. Tacos are $4.50 apiece while starters, quesadillas, burritos, and enchiladas are more in the $10–$15 range. He points out that restaurants peddling tacos for less generally have smaller portions and not packed with as much filling and flavor.

Los Chingones was founded and incubated in Denver—a market whose competitive dining landscape, particularly in the Mexican cuisine category, can be a proving ground for nascent concepts. Guard, who spent his teen years in San Diego, leaned into that city’s interpretation of Mexican favorites as a way to distinguish it from other cantina-style brands. Even the word “chingon” is a subtle nod to San Diego, where it’s typically slang for badass.

“You’ve got Mexico right there, and I just love their flavors. We’re definitely not authentic, but we take authentic flavors and put what I say is a ‘Troy Guard’ spin or twist on it. So [it’s] a more modern take on using different chilies like guajillos or pasillas or chile negroes and just making fun, new marinades, sauces, salsas, etc.,” he says.

One of the most popular dishes since day one has been the Adobo Chicken Thighs. Marinated for 24 hours in guajillo and adobo spices and then grilled, the dish is served alongside a cabbage slaw with a made-from-scratch guajillo ranch and topped with Takis (extremely spicy, rolled tortilla chips). Guard says that guests are also drawn to—and surprised by—an especially bold offering: rattlesnake chorizo.

The beverage menu includes more than 70 varieties of tequila and mezcal, half a dozen margarita renditions, and other signature cocktails, including seasonal specials.

Freshness is non-negotiable at Los Chingones—a quality standard Guard first learned working for industry trailblazer Roy Yamaguchi. After finishing college, Guard moved back to his native Hawaii, where he worked as a sous chef at Yamaguchi’s Kahana Bar & Grill in Maui before moving to Asia to open new locations of the chef’s various concepts. Yamaguchi had been among the cadre of chefs to embrace and celebrate native Hawaiian cuisine and ingredients back in the 1980s, and that ethos now informs Guard’s culinary approach.

“[Yamaguchi] is still a good friend and obviously a great mentor. … When I worked for him a long time ago, we were working with the ranchers and the farmers right on the island instead of bringing everything on a ship or a plane to Hawaii,” Guard says. “We don’t go screaming to the world that we use local and community-driven food and beverage. That should be the motto. Everyone should do that anyways.”

Los Chingones’ dedication to fresh, locally sourced ingredients may not be over-promoted, but it shows up in subtler ways. For one, the restaurants don’t have an on-site freezer because ingredients never go unused long enough to need one.

That community-first approach also permeates the very walls of Los Chingones, with each restaurant featuring murals by local artists. Like other concepts under TAG Restaurant Group, Los Chingones locations sport an open-air kitchen with a chef’s counter, where guests can glimpse the cooking and dish preparation.

“It’s a lot of fun to converse with the guys in the back. It’s my favorite place to sit if I’m ever traveling or going out to dinner in Denver. If there’s a chef counter, I’m always sitting there with my wife or friends,” Guard says.

In terms of size, Guard estimates Los Chingones’ sweet spot to be about 5,000 square feet total, with 3,500 inside and 1,200–1,500 outside. He’s also exploring the possibility of enclosing the patios to allow for year-round al fresco service.

The brand has grown to four locations in the metropolitan area, but this summer it’s hitting a new milestone with an outpost in Fort Collins, about an hour and a half north of Denver. Guard still sees plenty of white space in Colorado, but he’s also pursuing Texas as a viable market for Los Chingones. He cites the state’s business-friendly taxes and labor laws as a strong incentive, plus TAG already has a foothold in Houston, where it opened a second Guard and Grace in late 2019.

Growth won’t be at a breakneck pace, but Guard hopes Los Chingones can double its footprint to 10 units over the next two to three years.

“It’s just an easy concept and cuisine to wrap your arms around,” Guard says. “Obviously everyone’s doing something along those lines, but we like to think ours is bold, fresh, flavorful, and kind of hip and cool.”