During the pandemic, Girl & the Goat began shipping menu favorites, like the Goat Empanadas.

The award-winning chef found ways to innovate and move forward during the pandemic.

It’s been eight years since Stephanie Izard won a James Beard Award for Best Chef: Great Lakes. That same year she also graced the cover of FSR’s fourth issue. In the intervening years, Izard hasn’t just stayed at the top of her game; she’s also pushed to new levels.

Her existing restaurants, Girl & the Goat and The Little Goat, were joined by Chinese concept Duck Duck Goat in 2015 and Peruvian-centric

Cabra Cevicheria in 2019. Along the way she has won “Iron Chef” (after previously clinching “Top Chef’’ in 2008), written two cookbooks, and launched a line of sauces and spices under the brand, This Little Goat. 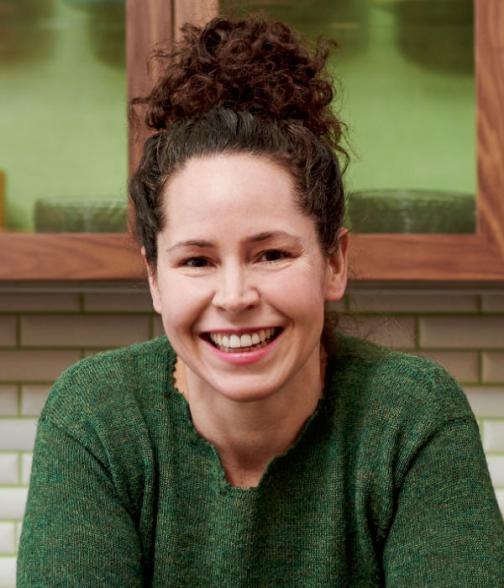 Favorite kitchen tool: Made In flat-bottom wok; it has the perfect heat distribution.

The restaurant industry in one word: Rebirth.

Chef you’d most like to work with: Kristen Kish; she’s a great friend, and we always have fun cooking together.

The most underrated dish: Tongue, usually beef or pork!

Hopes for post-COVID future: Learning from this pandemic to shape the future into a healthier, thriving, stronger restaurant community.

Amid the pandemic, Izard—like many chefs and at-home cooks—caught the baking bug. But where most bakers might temporarily add sweets to their carryout menus, Izard created an entirely new business. Sugargoat, which debuted last November, is the brainchild of Izard and pastry chef Faith Taheny who works across Izard’s other properties.

“It was born from chef Faith Taheny and I baking so much more than usual during quarantine. We started playing with new flavors and finding fun, nostalgic ways to create comforting desserts and wanted to bring some of those new recipes to the world,” Izard says.

Sugargoat’s menu harkens to childhood favorites with playful sweets like pancake cupcakes and cinnamon roll cookies. Comfort foods were in high demand last year, but the runway for Sugargoat extends far past the pandemic—and even beyond the Chicago area. Through a partnership with online marketplace Goldbelly, the brand’s sweets are now available for shipping across the U.S. (Last summer, Girl & the Goat began shipping meal kits through the same platform.)

This new, far-reaching service is also part of a broader shift in Izard’s business strategy, one that began in 2017 with the initial launch of This Little Goat. Guests were eager to recreate Girl & the Goat signature dishes like the sautéed green beans at home, so Izard offered them a helping hand in the form of consumer packaged goods.

In 2019, the CPG brand relaunched with new packaging, flavors, and increased distribution. This year marks yet another milestone as This Little Goat moves to wide domestic distribution while also expanding its product line. The most recent addition, Everything Crunch, is a mix of nuts, seeds, puffy rice, and crispy quinoa, with each variety bringing its own global flavor profiles such as Mexican, Japanese, and Thai.

“My goal has always been to help people bring excitement into their kitchens and meals, and This Little Goat makes it really easy to do so,” she says. That mission is further promoted by virtual cooking classes that feature the proprietary goods. And at a time when many restaurants are rethinking how and where they serve guests, Izard is funnelling a great deal of time and resources into growing the CPG side of her businesses.

“This Little Goat is definitely my biggest priority outside of the restaurants. I brought on a strong executive team to help execute our growth, and it’s been really energizing to see how well the line has been received,” she says. “It’s showing a lot of potential, and I can’t wait to see where it goes.”

Still, Izard’s forays into new foodservice operations aren’t limited to CPGs and nationwide dessert deliveries. Catering is poised to make a comeback as special events and other gatherings resume, and that branch of Izard’s business is ready to rebound. Goat Group Catering will be working smaller events both in and out of customers’ homes while also continuing to cater weddings, Izard says.

Event spaces are another off-premises area that Izard is exploring. In April, she debuted This Little Goat Kitchen in the West Loop, just a couple blocks from Girl & the Goat. From the outset, the 800-square-foot space was intended for a variety of purposes, from hosting private events and cooking demos to holding photo shoots to renting the space out to other businesses for cooking or photography projects.

At press time, This Little Goat Kitchen was on a hiatus following a change in the building’s ownership. Nevertheless, its inception is yet another example of Izard thinking outside the box in terms of what a restaurant brand can be and might do.

Even as her portfolio of fresh, distinctive ventures continues to grow, Izard remains wholeheartedly committed to the restaurant side of the business. While she doesn’t have any current plans to open new restaurant concepts, she is expanding her flagship. After three years in development, the second location of Girl & the Goat is slated to open in Los Angeles this month.

“I have always been envious of chefs in California for the long growing seasons and bounty of produce,” Izard told Food & Wine in 2018, when the project was first announced. “I’m excited to finally have an opportunity to approach the Goat’s menu with all that California’s produce has to offer.”

Over the past decade, the award-winning chef may have grown into a savvy business mogul, but her curiosity and creativity remain as strong as ever. Like many people, she’s feeling a bit of wanderlust after more than a year of COVID restrictions. Unsurprisingly, the places she’s eager to visit on a personal level also dovetail with her culinary evolution.

“Learning about other cuisines and getting back to traveling is a huge interest to me. I was just talking about how much I’d love to visit Korea and India,” Izard says. “There are so many places I’ve yet to visit, and I can’t wait to start working through my travel bucket list.”