Chef Ron Hsu Honors a Family Legacy, One Restaurant at a Time

Following in his mother’s footsteps, chef Ron Hsu is growing his portfolio.

The restaurant business runs in Ron Hsu’s family. His parents established a footprint of Chinese-American restaurants across the Southeast, and his siblings own Atlanta’s Sweet Auburn BBQ. But hospitality—the real kind that transcends the transactional—is in his blood. The Atlanta-based chef/owner of award-winning Lazy Betty, Vietnamese Juniper Cafe, and the forthcoming Humble Pie pizzeria absorbed it through 30-odd years of learning from his late mom, Atlanta food icon Betty Hsu.

The Taiwan-born Betty came to the U.S. with just $20 but went on to run seven Hunan Village restaurants with husband George in the ’80s and ’90s. She sponsored her parents and all seven siblings to join her in the U.S. and routinely opened her home to friends and strangers when they needed a place to stay. 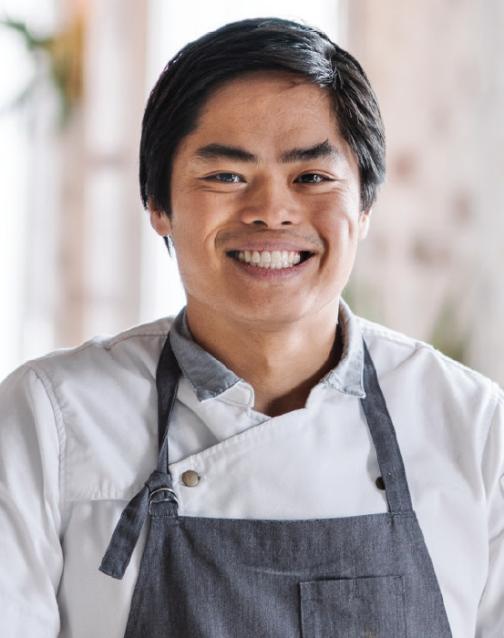 The restaurant industry in a few words: Helping and serving other people

Your post-shift drink: Bourbon or whiskey with three or four ice cubes

Chef you’d love to work with: My mom

“My mother had a very positive influence on the community—breaking down barriers through food, employing people, opening her home to people who needed to find their feet,” Hsu says. “That goes beyond the transaction of coming in, eating, and paying for a meal. You make people feel like part of your everyday life, part of your family. That’s real hospitality; that’s what drives me.”

Hsu’s mini empire will soon swell to three locations; café and bakery Juniper Cafe debuted last year, and Humble Pie pizzeria is slated to open in the coming months. Like Betty, Hsu took a big risk leaving his job as creative director at Le Bernardin to bootstrap a fine-dining restaurant in his hometown. (As did his wife, whose career progression was put on hold.)

“But my mentality, which I get from Betty, is give it a shot,” he says. “Go big or go home. Plus, it had to be in the South. New York is all business. I like the small talk in the South; it’s a platform to get to know people.”

In Stockbridge, Georgia, where Hsu grew up, the small talk was as charming as it was ubiquitous, though racism ran deep. Hsu was sometimes bullied; he recalls one incident at the pool when a white kid spat on him and hurled racial slurs. At home, dedication to hard work and kindness begot resiliency among Hsu and siblings Howard and Anita.

Like any restaurant kid, he loathed the hours spent peeling 50-pound bags of onions at Hunan Village instead of running around with friends. But by his teens he became captivated by the fancy plates and French brigade–style kitchens depicted in the trade magazines arriving at the restaurant each month.

As he neared the end of undergrad at the University of Georgia in Athens, he mustered the courage to tell Betty that he intended to go to culinary school once he got his business degree. Instead, she told him to not delay pursuing his passion any longer.

He enrolled at Le Cordon Bleu in Sydney, then worked at French-inspired Dish in Atlanta before moving to New York to join the staff of Eric Ripert’s celebrated Le Bernardin. During his nearly seven-year tenure, Hsu honed his viewpoint—applying classical French techniques to a global arsenal of ingredients with a penchant for Asian cuisines. Like Betty, Ripert encouraged Hsu to nurture his creativity.

“My mom died so unexpectedly; I never had a good good-bye,” Hsu says.

He knew she was worried about the success of his business, but shortly after she passed, the accolades began rolling in. Lazy Betty was a nominee for the 2020 James Beard Award for Best New Restaurant and received similar “best new” nods from Atlanta magazine and Eater, among other publications.

Lazy Betty centers around a six- and eight-course tasting menus for $160 and $200, respectively, but its name—winking at Betty’s notoriously unflappable work ethic—sets a refreshingly laid-back tone. Take Lazy Betty’s caviar service. Irtysh River caviar is paired with crème fraîche, but instead of the standard blinis, chopped onion, and egg, the roe arrives with house-made Chinese-style scallion pancakes and steamed milk buns.

“I like to think of eating at Lazy Betty like if you had a rich uncle with a world-class chef,” Hsu quips. “You go to his house where you’re served amazing food and on beautiful china and glassware, but your uncle is there so you can shoot the breeze with him.”

Indeed, the restaurant’s mid-century modern aesthetic (think: cognac-colored leather seating and lacquered wood tables) are tempered by its industrial space and lighter touches, like the peacock blue accents in the tiled bar backsplash and the upholstered benches.

Long incensed by the tipped-wage structure, Hsu instituted a federal minimum wage and a 20 percent service fee on customer checks. It took some convincing among staff, though Lazy Betty has been rewarded with almost negligible turnover, even despite the pandemic—which resulted in a prolonged closure that furloughed the whole staff. He’s still seeking a pay-structure solution at Juniper Cafe, which opened last December. (Currently the all-day cafe tacks on a 20 percent service fee to checks, though front-of-house staff gets the majority of it.)

Juniper Cafe fulfills Hsu and Phillips’ desire for something more casual, especially after both became fathers. The space exudes a relaxed yet playful atmosphere, with pastel-hued paper lanterns overhead and pops of cerulean, robin’s egg, and other colors enlivening an otherwise neutral palette. The increasingly pan-Asian and Southern menu leans on its Vietnamese-French roots on the bakery side, via housemade bánh mì, laminated pastries, and brioche.

Like Lazy Betty, Juniper Cafe has been met with enthusiasm and fanfare. The restaurant was among Bon Appetit’s 50 Best New Restaurants this year and earned a glowing review from Atlanta magazine, with veteran food critic Christiane Lauterbach calling Hsu “one of the best and most original chefs in the city.”

Indeed, the enterprising Hsu continues to evolve while also empowering his chef team to take more creative control of day-to-day menus as he prepares Humble Pie for opening.

The storefront will highlight local dairy producers in pies made from locally milled flour with nostalgic toppings like broccoli and farm-fresh cheddar or clam with clam juice dipping sauce. Pizza may seem like a sharp left turn, but Hsu genially replies, “Who doesn’t love pizza?”

More importantly, he adds that it’s what his community needs right now.

“Everyone is so on edge these days,” he says. “This is a neighborhood restaurant where you can come, have good food and be treated well, and not get too carried away with what’s going on in the world.”