A play on the Spanish word for Firewood, Dleña specializes in wood-fired dishes.

Growing up in Mexico City, chef Richard Sandoval spent countless hours watching his grandmother cook. And it was in her kitchen where Sandoval first fell in love with food. He says he would sit on the counter and watch as she prepared food for the rest of the family (up to 20 people), constantly sampling everything to make sure the flavor was right. It’s from these observational sessions where he learned his first crucial culinary lesson: taste everything. 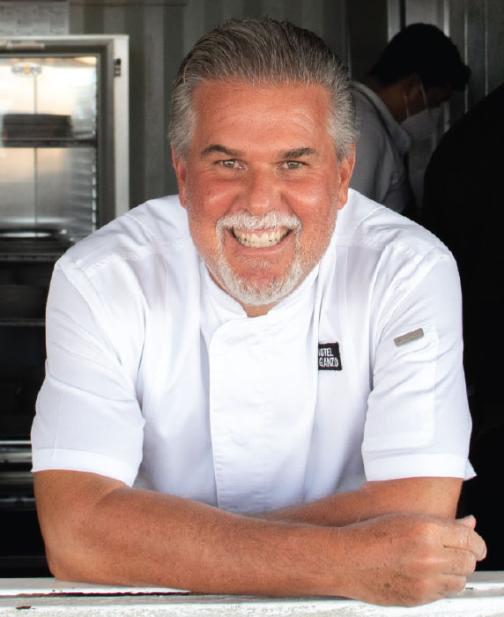 Restaurant industry in one word: Resilient

Chef you’d most like to work with: Nobu Matsuhisa (of Matsuhisa Beverly Hills)

“She was probably the most important impact in my life,” Sandoval says. “My power as a chef came from being exposed to a lot of ingredients as a kid, and I think the most important thing I took out of all of it, which I still do today, is that [my family] was always tasting food. All my chefs know that nothing goes out without being tasted.”

Sandoval’s grandmother wasn’t the only culinary influence in his life. His father was also a restaurateur and helped him learn the business side of being a successful chef, something Sandoval says has been integral in his ability to remain successful after nearly a quarter-century in the restaurant industry.

“My father taught me how to become a businessman,” he says. “A lot of times chefs think as long as we can cook and create things, we’re going to be OK. And unfortunately, that’s why you have such a high rate of restaurants that don’t work out—because we as chefs often do not understand the business side of it.”

Before he enrolled in the CIA in 1997, Sandoval was playing tennis at the professional level. He credits his time on the court with instilling in him quick, on-your-feet thinking, a competitive drive, and a willingness to take risks. These values continue to inform his vocations as both a chef and a businessman

After graduating from the CIA, Sandoval opened his flagship modern Mexican restaurant, Maya, in New York City. He says at first the reviews were not favorable, in part because many people weren’t familiar with Mexican food that wasn’t Tex-Mex. He wanted to introduce Americans to the authentic flavors and techniques of his culture.

“To me, Mexican food is one of the most varied cuisines in the world,” he says. “Look at all the different things we make with corn. There are hundreds of varieties of chiles, and how you treat every chile is different, whether you’re roasting them or smoking them.”

Slowly but surely, he began winning over customers with authentic flavors and colorful dishes, though he believes good timing also played a role. Sandoval says that as the internet became more popular, the American palate broadened and began venturing beyond the old, familiar staples and into international cuisines.

“Globalization made the world a lot smaller for everybody,” he says. “I think it’s opened people’s palates and minds to experience different things. … The timing for me at that point was right. I think in life, timing is everything.”

Once Sandoval had established himself as an authority on Mexican flavors, he decided to use his platform to become an ambassador for other parts of Latin America. While Mexico has no shortage of spices and flavors, countries like Peru, Columbia, and Argentina all have their own distinct ingredients, signature dishes, and culinary style.

“The flavor profiles that you get in South and Central America are spectacular,” he says. So as the chef opened more restaurants, he made a point to include dishes from these countries.

In the 24 years since his first restaurant debuted, Sandoval estimates he’s opened 60–70 total. Currently his portfolio boasts 55 restaurants across nine states and the District of Columbia, as well as eight other countries. This includes a number of one-offs, as well as multiunit concepts like Toro (Latin-American), Zengo (Latin-Asian), and La Sandia (Mexican cantina).

He owns all the restaurants and regularly visits them to ensure the quality of the food and hospitality are up to his standards. The chef guesses that on average he travels nearly 400,000 miles per year. This time is also spent doing research around the world to discover new markets and tap into flavors customers didn’t yet know they wanted.

And while his face may not be as recognizable as other chefs with similar résumés, he prefers it that way. He describes himself as a bit introverted and says he would rather be running his restaurants than be in front of a TV camera. Instead he prefers that his restaurants be successful based on merit, not celebrity status.

That merit has helped him not only grow into different countries but also continue developing new concepts. In addition to expanding his multiunit brands like Maya and Toro, Sandoval is constantly dreaming up fresh ideas for new restaurants.

Most recently, he opened dLeña, a sprawling 6,000–7,000-square-foot modern Mexican restaurant in Washington, D.C., in May. The Oaxacan-inspired restaurant specializes in wood-fired dishes. Sandoval says he wanted to create a concept that brought simplicity, like cooking on a wood-fired oven, back into the kitchen.

The restaurant is only half the equation. About a month after it opened, dLeña Roja made its debut downstairs. Specializing in Mexican spirits, the dimly lit lounge serves 250 tequilas and 50 mezcals. It also rents out private lockers that guests can use to store their liquor collections.

Sandoval says despite opening during the pandemic, the restaurant and its downstairs bar have both seen great success—even despite the smoky air that accompanies a wood-burning fire.

“Sometimes I walk out smelling like a barbeque pit,” Sandoval says. “It’s kind of funny, because we didn’t think about that, but people don’t care. People are loving it. We’re full every day.”