She leads Uchi with a waste-not mindset.

Service and sustainability are two words that chef Rhonda McCullar uses to describe her culinary aspirations. They also reflect how she runs her kitchen.

McCullar is the newly appointed chef de cuisine at Uchi and Uchiba in Dallas; she’s also the first woman of color to hold the title. The two concepts, both under Austin, Texas–based Hai Hospitality, were created by award-winning chef Tyson Cole, with Uchi as a modern Japanese restaurant and Uchiba a cocktail bar. 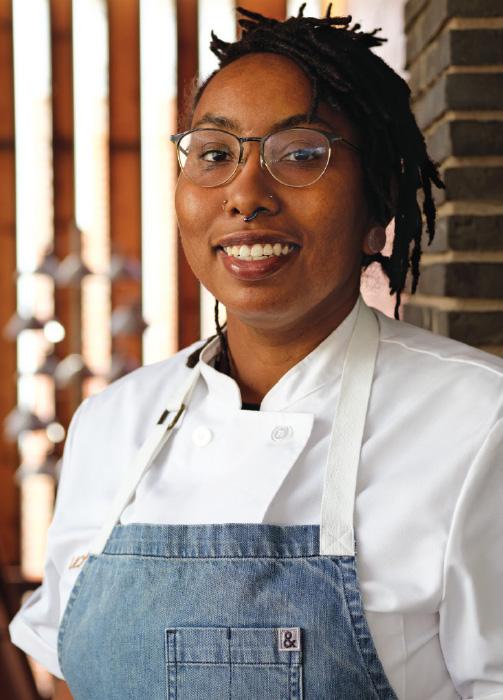 Restaurant industry in one word: Intense

Growing up in small town Ennis, Texas, McCullar spent plenty of time in the kitchen helping her mother and aunt prepare meals for family gatherings and parties. The chef says this is when her love of food and service first started.

“From a very young age, I associated food with joy and happy times because essentially whenever we were cooking or whenever we were eating, it was just like a party or some type of festivity,” she says.

Her mother also taught her the importance of not wasting food or ingredients, especially when so many still face food insecurity. McCullar took this philosophy to heart, and it still informs how she cooks, namely with a mission to use as much of an ingredient as possible, especially when it comes to animal proteins.

At Uchi, leftover bones are turned into stocks, while vegetable trims and other miscellaneous ingredients are repurposed for staff meals.

“I just cannot get down with waste,” she says. “When you waste like that, you’re essentially saying that the people who are in need don’t matter. It says to me that you have no regard for anyone else.”

And whenever there’s a surplus of ingredients that don’t make it into stocks or staff meals, the chef will load up whatever is left at the end and pass out the leftovers to unhoused members of the community. Waste is simply not within her wheelhouse.

“It’s just so near and dear to me because I feel like there’s always somebody that really needs it,” she says. “I’m not doing it to be seen; I’m doing it because I truly have a passion for serving people, and I just want to give back as much as I possibly can.”

McCullar’s journey to the restaurant world was not as direct as some chefs. In fact, she was both an athlete and an educator before pursuing the culinary arts at a professional level.

While in college, McCullar planned to pursue a basketball career—at least until her mother became terminally ill, which led her to return home. Following the advice of her mentor and former coach, McCullar decided to pivot toward a career in teaching.

She worked as a sixth-grade science teacher for a while, but ultimately decided to enroll in culinary school not only to pursue a passion but also in the hopes of better providing for her younger brother and sister.

“Having that strong science background and understanding what happens to food at a molecular level helped me out a lot,” she says.

This expertise and knowledge base are especially crucial given McCullar’s dietary restrictions. As a vegetarian, she doesn’t sample dishes like Uchi’s wagyu tataki and its sasami yaki (chicken, coconut milk, and cilantro). Instead, she relies on her staff to help gauge whether a dish is a winner or needs improvement.

As far as the animal components of the menu are concerned, McCullar will taste the rubs or marinades meant for seasoning the proteins, but that’s as far as it goes. And if she’s creating a plate that requires an ingredient like fish sauce, she’ll sample it all the way up to the point when the fish sauce is added. After that, she calls her colleagues.

“I’ve gotten very good at being able to tell if someone is just trying to be nice to me or if they’re giving me a real representation of what they think,” she says. “If I go to five people and they all say it’s missing a bit of acidity but the salt is perfect, then I know we need to add something to the dish.”

The menu at Uchi features plenty of carnivorous offerings, but McCullar’s love of vegetables is displayed through dishes like the green tomato katsu (served alongside chili aioli and lemon) and the kabocha tempura (fried Japanese pumpkin). Her skill especially shines when she puts a veggie spin on plates that are traditionally rooted in animal proteins, such as the crispy tofu maki, served with inari, avocado, and red kosho.

McCullar joined Uchi in Dallas when it first opened in 2015 and has been rising through the ranks ever since. In the restaurant world, it’s a relatively long time to stay at one place, but she has no plans to leave anytime soon, especially following her promotion last September. She says she loves working somewhere that allows her to be creative and part of a team, something she missed from her basketball days.

However, that doesn’t mean she hasn’t given thought to the more distant future and what the next move in her career might be. Like most chefs, she wants to eventually have her own business, but unlike many of her peers, she isn’t looking for a permanent brick-and-mortar or even a food truck. She has her eyes set on a different concept: a pop-up that she can move around Dallas.

McCullar says a pop-up would grant her the flexibility to tweak the menu based on what’s available at local markets any given day. It’s yet another way to provide service, reduce waste, and promote sustainability.

“I think, for me, that’s my ultimate goal, my ultimate vision for myself: service and sustainability,” she says.

How Restaurants Can Court Holiday Diners with a Gluten-Free Marketing Campaign
Chili's to Give Away 27,000 Molten Chocolate Cakes
Cotton Patch Cafe Launches 2 for $22 Meal Deal