During the pandemic, Michel tweaked her offerings for carryout.

In her cuisine and community work, the restaurateur remains committed to Kentucky.

For Kentucky chef and restaurateur Ouita Michel, all roads lead to the Holly Hill Inn. The historic converted home in Midway, Kentucky, would not only launch her hospitality mini-empire and prompt the first of her seven James Beard Award nominations, it also cemented in her a lifelong commitment to circular investment in Kentucky’s food economy. “Over the years, I opened other restaurants; all of them are iconic to me, but my true heart is at Holly Hill,” Michel says.

After abandoning a future in law to work in restaurants in New York City and attending the Culinary Institute of America, she and husband Chris Michel were drawn back to her childhood home of Lexington, where they joined the executive opening team of regional southern restaurant Emmett’s in 1998. Yet when the opportunity arose two years later to purchase the 150-year-old converted bed-and-breakfast in the heart of Bluegrass horse country, the Michels jumped. They debuted their market-driven, fine-dining restaurant, Holly Hill Inn, on May 9, 2001. 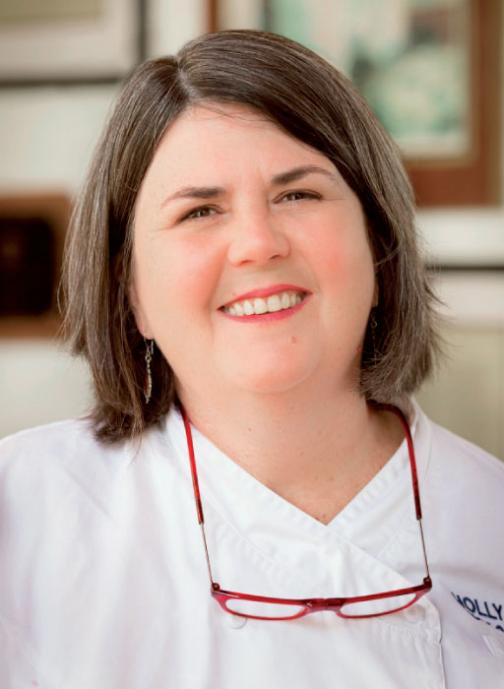 courtesy of University Press of Kentucky

The restaurant industry in one word: People

Chef you’d most like to work with: Nina Compton

The most underrated dish: Green salad

Your hope for 2021: I hope that as we emerge from the restrictions of the past year, we stay mindful of all the things we learned and the good things that came true at a dark time; that we resist the urge to return to the old ways, but really change.

“In M.F.K. Fisher’s book Gastronomical Me, [Fisher] goes to a restaurant in the countryside, and the woman cooks this amazing meal and waits on the table at the same time; that vision always lived with me at Holly Hill,” Ouita Michel says. “It was very much like that; we cooked and served simple, all locally procured food and lived upstairs.”

“Kentucky has a wealth of small farms,” Michel says. “In addition to our mission of hospitality, we have a mission to increase farm income in Kentucky, because we feel strongly that if everyone in foodservice made a commitment to local agriculture, we’d create an economy to help young people go into local agriculture.”

For Michel, that meant letting every, usually historic, location and what grows nearby dictate how each concept unfolded. Her second restaurant, Versailles, Kentucky–based deli Wallace Station in an old country store, would spotlight Kentucky beef hamburgers along with fried local catfish and sandwiches piled with regional country hams. At the Windy Corner po’ boy shop and market, they would cook with and sell items from all local meat and sundry suppliers. Seafood-focused Smithtown would test the scalability of Kentucky’s first indoor aquaponics farm. Run by nonprofit food incubator FoodChain (where Michel is a founding board member), the recirculating farm supplies Smithtown’s now two locations with microgreens, herbs, and tilapia.

Michel never intended to helm a mini-chain empire. But when she and Chris were readying their sixth and largest restaurant, Honeywood, in 2016, it sunk in that they weren’t in the same kind of business. The group struggled with exorbitant food costs and lacked formal bookkeeping. They hired a former multiunit franchise operator as the first director of operations. Doug Mullins—now serving as COO—implemented a dashboard system requiring managers to track, collate, and log weekly purchases. He also consolidated the group’s buying power with its broadline distributor by linking its diverse concepts. Within a month, food cost had already dropped eight points.

“I credit him with saving our company in a way because of policies and procedures he was able to introduce,” Michel says. “It also required me to step up and be a tough cop at times.”

Indeed, despite that year-over-year sales were down 60 percent in 2020, the group kept everyone—working or not—on health insurance and helped with emergency rent payments and grocery purchases. The Michels continued giving back, donating the proceeds of online Zoom classes to local food pantries. They also worked with FoodChain to launch the initiative Nourish Lexington, which turned the nonprofit’s huge processing and teaching kitchen into a production space, hired out-of-work restaurant workers, and recruited volunteers to produce some 250,000 meals for needy people in central Kentucky.

“One of the reasons I moved back to Kentucky was I wanted to feed the community and know people walking through the door,” Michel says. “I know conclusively after 2020 how valuable what we do really is to me, my staff, and our community.”

On a deeper level, COVID brought quiet and much-needed intention back where breathless, self-imposed exigency existed before. “There’s so much urgency in the restaurant business, and it’s artificial,” Michel says. “I don’t want that anymore. I want to pay attention to quality of life for myself and my staff. This isn’t brain surgery; we don’t have to be on call 24 hours a day.”

That includes a decision that Michel is dead set on: She’s done opening restaurants.

In the spirit of reflection and slowing down (a little), Michel finally published her first cookbook, Just a Few Miles South: Timeless Recipes from Our Favorite Places in April. She’s already embarking on a second cookbook about the Holly Hill Inn—where it all began and where she and Chris still live—though, blessedly, no longer above the restaurant.

“The story of this special place and its special people is not over; it’s never done,” Michel says. “But I realized something I hadn’t thought of in my life yet; that if I don’t write these stories and recipes down, I’ll forget. And no one will ever know. ”