Each Privado seating features 12–15 courses that will be served along with a soundtrack for the night.

“I’ve always been fascinated by the idea that you get a guest for three hours and you get this opportunity to have them understand who you are as a chef, as a person, and as a restaurant more than them just ordering an appetizer and an entrée and going home.”
December 2017 Sam Oches

Chef Mike Randolph has established himself as one of the leaders of St. Louis’s booming restaurant scene. But while his two biggest hits, Público and Half & Half, are more casual, his latest venture finds Randolph returning to one of his first loves as a chef: fine-dining tasting menus. The James Beard semifinalist just opened Privado, a weekends-only concept, in the city’s Delmar Loop. The restaurant also serves as a space for private events, pop-up dinners, and new-idea incubation. 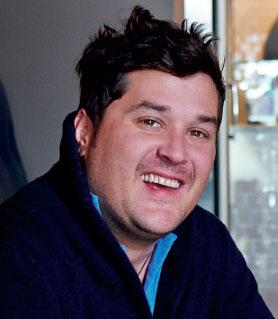 The freedom of tasting menus

I cut my teeth in Chicago working with Homaro Cantu doing tasting menus. For six years we’ve been doing pop-up dinners in our other restaurant to sharpen the iron on this idea. The constraints of Público or its predecessor, Randolfi’s—those shackles have been removed. The philosophy of Privado is it needs to have a tirelessness about it, a constant striving to do something new.

Service with a smile (and a song)

How do you walk the line between having what we deem as being perfect service, but do it in a manner that’s not necessarily befitting of a white tablecloth? We do that through letting the servers interact in more genuine ways. We try to maintain a sense of humor about the food and the service, doing some things that we perceive to be a bit outlandish throughout the course of 15 dishes. The whole evening is paired with a soundtrack, and we have different songs that come on that let us know where we are in the course of the meal.

When we went into the Delmar Loop, people thought we were crazy. Through Público, we were able to be the first restaurant to push that boundary in the Loop. There are people in St. Louis who feel a bit apprehensive about coming to the Loop, but it’s a real community. It’s easy to move into highfalutin neighborhoods and pay big rent and then probably do well, but maybe it’s more important to go some place that needs you a little bit more.