Global meets New American with bites like Hawaiian Pork Belly and Boudin with Creoleaise at Tchefuncte’s.

His time in two iconic Southern cities inspires the menu at Tchefuncte’s and The Anchor.

There’s a certain amount of confidence a chef needs to open two restaurants in the middle of a pandemic. So it’s a good thing Michael Gottlieb knows what it’s like to work for a concept with staying power.

In 1884, the chef’s great-great-great-grandfather opened Gottlieb’s Bakery in Savannah, Georgia. Nearly a century later, the city’s staple bakery became the place where Gottlieb discovered his love of food.

“I would go in the morning and fry the doughnuts, and I would make the doughnuts in the afternoon when I got out of school. I would go to school in the middle of the day, so it was kind of like an all-inclusive situation,” he says. “I knew I wanted to be in the food business from the day I was born.” 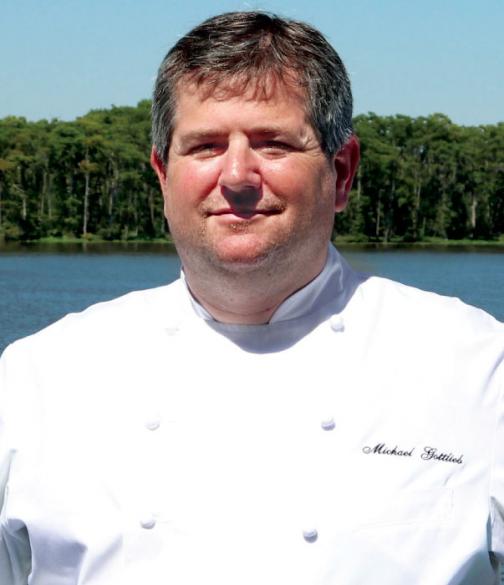 Restaurant industry in a word: Intrigue.

Chef you’d like to work with: The late Jean-Louis Palladin.

Most underrated dish: Chicken. In a fine-dining environment, a killer Poulet Rouge is awesome, and people usually look over that.

Hope for 2021: I would like to say growth, but I think a lot of that’s going to depend upon where we sit now.

Gottlieb would later study the culinary arts at Johnson & Wales University in Providence, Rhode Island, where he graduated with a degree in hotel restaurant management. From there he worked his way down the Eastern seaboard, with stints that included The Inn at Perry Cabin in Saint Michaels, Maryland, and The Inn at Little Washington in Washington, Virginia.

Gottlieb eventually returned to Savannah, where he opened Gottlieb’s Restaurant & Dessert Bar along with his brothers after the original family bakery closed in 1994. The restaurant became a success and earned a AAA Four Diamond restaurant rating. However, critical acclaim didn’t spare the concept from the effects of the 2008 financial crisis and subsequent recession.

“We had a very successful restaurant back in Savannah, but unfortunately, there was no business. Nobody could afford to go out to eat,” Gottlieb says. “It was very hard to navigate those times and try to keep business afloat.”

When Gottlieb’s Restaurant & Dessert Bar closed, he took his culinary chops to New Orleans where he worked for the multi-generational, family-owned Brennan Restaurant Group. Gottlieb ran two kitchens in the Crescent City while also leading the food program at the Royal Orleans Hotel before once again returning to his hometown.

His time shuttling between Savannah and New Orleans imbued Gottlieb with a deep understanding of the two Southern cities and how they differ. For him, Savannah is a laid-back food scene with an emphasis on longtime customs. But while Savannah’s staples—like  shrimp boil and oyster roast—keep its food scene satisfied, the chef finds the innovation of Louisiana to be on another level.

“[Savannah’s] about the food. It’s about the family. It’s about keeping tradition alive,” Gottlieb says. “In Louisiana, you’ve got 700 million different versions of tradition when it comes to food.”

In 2019, the chef made his migration to New Orleans again. This time, it was for a development project in Madisonville, where he helped bring two new concepts, The Anchor and Tchefuncte’s, to life. He now serves as culinary and operations director for both.

Although Gottlieb was already well-versed in the challenges of running a restaurant during a recession, the chef now had a new crisis to contend with, namely a global pandemic.

The Anchor opened first in June—a time when guests could take advantage of the restaurant’s outdoor bar and open-air dock. Tchefuncte’s soon followed; it opened in August at 25 percent capacity. In a strange way, the restriction dovetailed with Gottlieb’s original plan for the restaurant.

Though the concepts share a building on Louisiana’s Tchefuncte River, the two diverge in their cuisines. Downstairs, The Anchor’s 3,500-square-foot space provides casual fare that pays homage to Louisiana, featuring local seafood and smoked meats in a relaxed setting. The food fuses Gottlieb’s experiences in New England and the Deep South, where guests may find a traditional Louisiana po’boy with a bun that’s more reminiscent of a Maine lobster roll.

Above The Anchor, Tchefuncte’s offers upscale dining for its guests. The restaurant veers away from Cajun-Creole downstairs and instead offers what Gottlieb describes as “modern American-French rooted with a nod to the world.” The French-style kitchen may also serve local bounty like snapper, but with an elevated twist that includes edible flowers, forest mushrooms, and a pistachio vinaigrette.

Gottlieb credits his upbringing for his ability to move in between different cuisines and styles.

“Having grown up in the restaurant industry and having traveled so much with my family and eating all around the country and world, I like all cuisines. I try to build my food based off of cuisines that play into my everyday palate,” Gottlieb says. “I don’t hold back on anything.”

The Anchor has closed its doors for dine-in business for the winter due to regulations that prohibit operating within an enclosed environment. Meanwhile, Tchefuncte’s continues to operate in a socially distanced way, with a current dining room capacity that can fit around 30 people.

Gottlieb has trouble predicting the landscape of the New Orleans restaurant scene post-pandemic, especially given that Mardi Gras festivities have been cancelled.

The Anchor and Tchefuncte’s are located in a suburb about 45 minutes away from New Orleans proper. In a way, the two restaurants are spared many of the problems facing operators in the heart of the Big Easy. But with a sharp decline in tourism dollars, New Orleans’ once bustling restaurant scene has put many of Gottlieb’s industry friends out of work.

That’s why it’s so important to the chef that the restaurants continue to operate, even if it’s at greatly reduced capacity or takeout-only.

“Ownership and myself both feel that being able to keep people employed during these times has been a very big reward for us,” Gottlieb says. “I’d say that it’s been a lot of hard work, but the restaurant business is hard work. So it’s been worth it.”