Turkey and the Wolf

Turkey and the Wolf.

While not a native New Orleanian, celebrated chef Mason Hereford has found a tight-knit community—and an unrivaled restaurant scene—in the Big Easy. 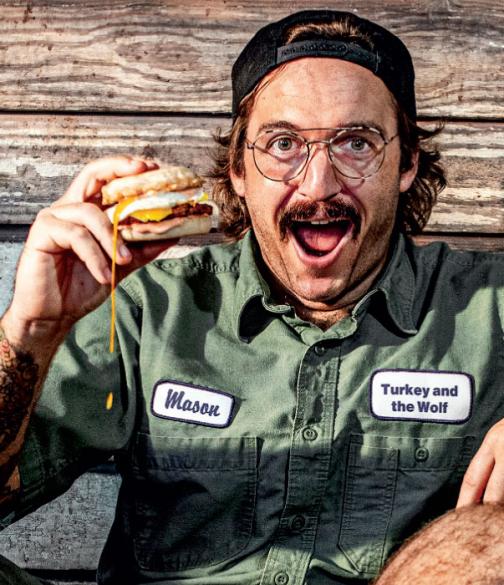 As the OG melting pot in the U.S., New Orleans has a culinary scene like none other. The city keeps its traditions alive while also welcoming new flavors and voices into the fold. Chef Mason Hereford is one such transplant.

In 2008, the Charlottesville, Virginia, native moved to the Big Easy, where he first learned how to cook. After earning his fine-dining chops at revered restaurants like Coquette, Hereford started his own fast-casual sandwich shop, Turkey and the Wolf, which Bon Appetit named The Best New Restaurant of 2017. The following year he opened Molly’s Rise and Shine, and most recently he helped friend and fellow chef Ryan Pfeiffer create Meet Big Kids, a takeout concept in Chicago. Collaborations aside, Hereford’s heart remains firmly in New Orleans.

Everyone is part of the krewe

Pre-pandemic, I’d find myself walking into a store to buy something, and whoever is working the cash register and I might randomly talk for 10 minutes, and then my day will be better. I think that happens more in New Orleans than in any other city

New Orleans has some of the best Vietnamese food in the country; my personal favorite restaurant in New Orleans is a Vietnamese restaurant. We also have a massive Honduran population here, and that food is just sort of hitting the scene.

The South Louisiana specialty of boudin and cracklins are things you can’t get outside of New Orleans that are very important to the history of Louisiana food. It’s just the most decadent, savory bad-for-you [food]. Gumbo is also one of the best foods on earth.

Why the big easy rocks

There’s just something about New Orleans—where it’s situated, the way people act, the fact that there are so many fun things going on at the same time. The food tastes good; the music is good. All those things combine, and these little situations pop up where you’re like, “I love my city.”

New Orleans has an awesome dining scene. The traditional fare that people came to this city for has evolved and been reimagined by a younger group of chefs while also celebrating those older restaurants that are still around.