Southern flavors take a fine-dining turn in dishes like the frisse and Duck Fat vinaigrette salad at Henley.

She came to the restaurant world later than most but has quickly made up ground.

Chef Kristin Beringson is a self-described mutt. She was born in Athens, Greece, raised in South Dakota, went to high school in Ocean City, Maryland, and studied as an undergraduate in Philadelphia. That doesn’t include her time spent abroad in Fiji, New Zealand, and Australia.

While her home has been in flux, food has always been a constant in her life. Whether that meant being around her family’s bakery or cooking with her father, Beringson was in close proximity to a kitchen. She’s had a culinary curiosity since her childhood. 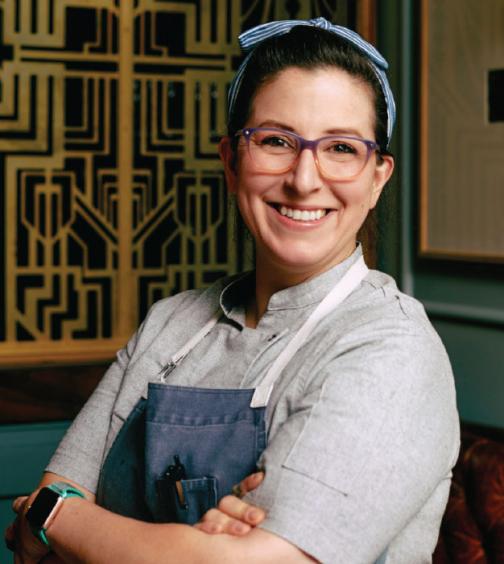 Restaurant industry in one word: Intense

Chef you’d most like to work with: Michael Anthony (of Gramercy Tavern)

After-shift drink: Wine, unless it’s been a tough shift. Then it’s tequila.

“As far as food goes, my grandmother and grandfather owned a bakery; my dad had a big love of cooking,” the chef says. “My mom was like captain Velveeta rice casserole with broccoli. She couldn’t cook her way out of a bag, but my dad really enjoyed it. We grew up hunting and fishing. I think I was 5 when he took me hunting for the first time. So, a love of ingredients was kind of instilled in me. I was that annoying little kid that would follow my dad around and ask, ‘What is that? What is that?’ I asked him a thousand questions and god knows if he even told me the right answers.”

As eclectic as her upbringing was, Beringson’s path to the kitchen was just as unconventional. While some chefs get their start as a dishwasher at a young age and work their way up the ranks, Beringson took a different route. In fact, she wasn’t even working in the restaurant business when she was in her late 20s.

“I was standing in the electronics department at a Target that I was managing, and it was Black Friday. They came over the walkie and said, ‘OK, we’re opening the doors,’ and I was just like, no, no, this isn’t it,” she says of the lightbulb moment. “So I enrolled in culinary school, and I quit my job.”

After leaving the corporate-retail world in 2009, Beringson studied at the Art Institute while cutting her teeth at Holland House in Nashville, Tennessee.Over the next decade, she worked at a number of celebrated establishments in Music City, from City Winery and SILO to The Green Pheasant and Ellington’s inside The Fairlane Hotel. Along the way she also clinched a victory on Food Network’s “Chopped.” Today, Beringson is the head chef at Henley, a modern American brasserie at the Kimpton Aertson Hotel in Nashville.

Food in the South can get a bad reputation. Most people associate Southern cooking with fried, greasy offerings. But, as Beringson tells it, Henley has much more to offer than the ubiquitous Nashville hot chicken.

“There’s a trout farm 40 minutes west of here; that’s beautiful and great,” she says. “I think people would be surprised that we do have access to so many local products. We have the hydroponic farms that the bigger markets have. Those have become huge lately.”

Beringson thinks people would also be surprised by the elevated nature of the local cuisine. She hosts 14-course chef’s table events for small parties on Thursday, Friday, and Saturday nights.

“The fact that those tasting tables are available in Nashville is really special. It’s not just NYC doing the special tasting menus. There is a market here for that as well,” she says.

Henley’s offerings, like country-fried brie, summer corn chowder, and chicken-fried quail, hint at Southern comfort foods but with an elevated twist representative of a brasserie.

Aside from a fresh menu, Beringson brings a new outlook to the kitchen at Henley. In a profession usually dominated by men, Beringson says she doesn’t think too much about the challenges she has faced trying to break into the boys’ club. She lets her cooking do the talking.

“Life is merit-based, and I don’t think of cooking as anything different,” she says. “I just worked really hard and I did a good job and I did better than the person standing next to me.”

Although she doesn’t dwell on being a female chef in a very male-dominated profession, Beringson works to make the kitchen welcoming and inclusive. More than half of the kitchen staff are women.

“I tend to run a team with a little more empathy and care. I genuinely care about my employees and I want my team to learn and thrive and one day be better than me,” she says. “I don’t like working yourself to death—that’s not me. I make a place where people want to be and they want to work.”

The drive that led her to run her own kitchen also helped Beringson walk away victorious from “Chopped.” Confident in her abilities, Beringson beat three other chefs to claim the top prize of $10,000.

She describes the competition as a bit unnatural, noting how television isn’t always as it appears. Long wait times between rounds, an unusually hot kitchen, and one particularly feisty judge all took her by surprise. Nevertheless, the chef looks back on the experience fondly. “It was a good exchange,” she says. “It did a lot for my career at the time.”

It’s been seven years since she won, and Beringson has grown both personally and professionally in the interim. She credits her experiences cooking and raising her children with softening her.

“It calmed me down,” she says. “I realized I had to build the people up below me so I could keep on going. When you’re young, you want to do it all. Nobody else can do it as well as you. But when you realize that empowering those around you to do the things that you do is the way to go, that’s when you start pushing yourself forward.”

When looking to the future of foodservice, Beringson hopes the industry rethinks how it does business. She says restaurants need to raise wages and offer other benefits in order to remain competitive with other industries.

As for Beringson herself, she is happy to keep practicing her craft in the kitchen but unlikely to compete on camera anytime soon.

“I know that I’ve made a good choice, and I really do enjoy it,” she says.