Chef Kenny Gilbert Brings it All Together at Grove Bay Hospitality

He's bringing harmony to a range of efforts.

For chef Kenny Gilbert, the best culinary career is one that pulls from multiple disciplines. Over the past 30 years, he’s honed his craft both on the kitchen side of foodservice as well as the management and business perspective. He’s well-versed in switching from catering and hyper-casual cuisine to luxury fine dining on a dime—a result of decades spent in the hotel and resort space. 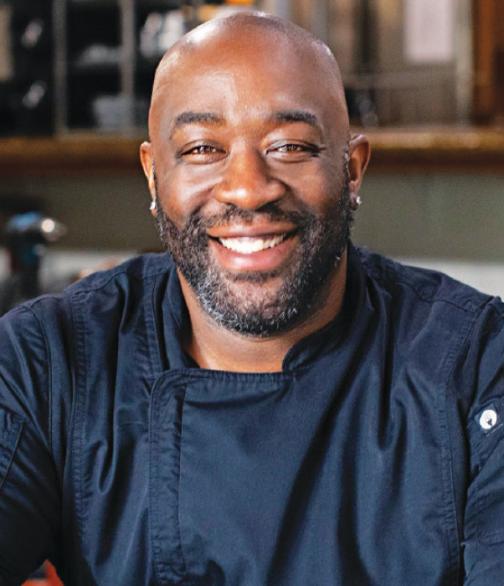 Ingredient of the moment: Chicken

Chef you’d most like to work with: Jeremy Ford

“There are a lot of moving parts, so you have to be very organized with time management. You have to be able to shift gears; one minute, you could be in a pool bar restaurant, cranking out chicken tenders and french fries, and then you shift to being in the fine-dining restaurant that’s a $200 average check per person, putting out multi-course meals,” Gilbert says. “Working in hotels gave me that diversity.”

In addition to his work in hotels, Gilbert is an entrepreneur who has built multiple businesses (from CPG spice blends to restaurants), competed on “Top Chef,” and even snagged praise from none other than Oprah Winfrey. These wide-ranging experiences have made Gilbert a shoo-in for his new role as vice president of culinary operations at Grove Bay Hospitality. The Miami-based group comprises a number of concepts created by multiple (and often star-studded) chefs, including Marcus Samuelsson’s Red Rooster Overton; Michelin-starred Stubborn Seed and Beauty & the Butcher from “Top Chef” champion Jeremy Ford; and Root & Bone, Stiltsville Fish Bar, and Mi’talia from another pair of “Top Chef” alums, Janine Booth and Jeff McInnis.

Grove Bay previously had a corporate chef, which was similar in spirit to Gilbert’s position, but the title change marks a shift in how the growing group will operate moving forward.

“My job is to be the voice of the chef when they’re not present—because they’re growing their brand, and they’re doing a lot of different things—and [to] understand what I call the sacred cows of the operation. What makes a Red Rooster, Red Rooster? What makes a Stubborn Seed, Stubborn Seed? What makes Mi’talia, Mi’talia?” he says. “You have to respect the chef for who they are as a professional and what they’ve accomplished in their career and in building their brand, but then also have the confidence to be able to give examples of how to make it better.”

It’s a fine line to walk, but Gilbert does so with aplomb. Recently, the chef made a small suggestion while reviewing the Mi’talia menu with McInnis. The restaurant’s cheese plate had two American varieties and only one Italian cheese; Gilbert recommended that, in keeping with the Italian focus of the restaurant, they switch it to be two Italian and one domestic cheese.

“I’ve known Jeff for a long time. He used to be my sous chef back in the day when we were at the Ritz-Carlton, so I know his style and understand how he thinks,” Gilbert says. “Sometimes you go cross-eyed; you need somebody else to look at it from another perspective. And I think [the chefs] respect me enough to do that.”

Indeed, relationships built on mutual respect have been a hallmark of Gilbert’s career, and that emphasis can be traced back to his earliest days in the kitchen. Like so many in the industry, his interest in all things culinary was first sparked by cooking with family. The chef remembers how his mother put him at the stovetop to scramble eggs at 3, and how his father had him preparing meats on a Weber grill not long after. By 11, Gilbert was spearheading the Thanksgiving feast for his whole family.

As he’s risen in the kitchen ranks, Gilbert has made a point to nurture his team just as his parents once did for him. He also names several general managers and chefs as important mentors, from those who first recognized his talent and showed him the ropes to others who exposed him to global cuisines and the business side of foodservice.

On this latter point, it was Lawrence McFadden at the Ritz-Carlton on Amelia Island, Florida, who encouraged Gilbert to think beyond the kitchen. McFadden himself started as a chef, but after he left Amelia Island for a corporate role, he advised Gilbert to consider broadening his own experience.

“I remember like yesterday. He said, ‘Kenny, you’re selling yourself short by only being a fine-dining chef. At some point, you need to leave in order to really grow to who you are capable of being,’” Gilbert says. “He said, ‘Imagine you can be in charge of the whole hotel or multiple units and you can take all your experiences and your passion and put them into every area that you touch.’”

The chef admits he didn’t fully grasp the wisdom of McFadden’s words at first, but it didn’t take long for him to follow the advice. Just a few months later, he assumed his first executive chef position at a high-end, multiunit luxury club in Naples, Florida.

“I realized that was my calling. I couldn’t just do one [property]; I would be bored,” he adds.

Even now, in this new, dynamic position with Grove Bay, Gilbert has other irons in the fire. He sells proprietary spice blends online, and his first-ever cookbook, Southern Cooking, Global Flavors, will debut this April. Add to that, Gilbert boasts an original concept of his own, Silkie’s Champagne & Chicken. The fine casual, which, true to its name, touts a counterintuitive pairing, was recently named one of the top 10 champagne bars stateside by the Champagne Bureau USA—it was also the only concept in the Southeast to land on the list. Interestingly enough, Gilbert credits a phone call with Oprah for galvanizing him to start Silkie’s. He’d cooked for the mega-star in the past, who is a vocal fan of his chicken biscuits.

And those biscuits could soon be welcoming more fans into the fold. Gilbert hired a company to put together a franchise package for a more casual iteration of Silkie’s called Kenny’s Chicken & Biscuits.

Though the role of franchisor is a far cry from VP of culinary operations, both positions draw on Gilbert’s innate ability to marry culinary chops with management know-how and a genuine desire to raise others up.

“I can help other people buy into my company, and I can help train them to open up their concept because the teaching part was what was great for me. I felt like I was paying it forward,” Gilbert says. “I have a saying that as you learn, you teach, and as you teach, you learn. It’s a beautiful cycle, and so that’s what keeps me motivated. That’s why I feel I do pretty well in this type of environment.”