Dishes like Mafaldini Alla Funghi were inspired by Akunowicz’s time in Italy, where she worked as a pasta maker.

The pandemic has challenged chefs nationwide, and James Beard Award–winning chef Karen Akunowicz is no exception.

But the two-time “Top Chef” participant is no stranger to adapting to challenging circumstances. A few weeks before Boston’s shutdown last spring, Akunowicz prepared for a situation where her restaurant Fox & the Knife would move to 50 percent capacity. Then the city’s mayor announced restaurants would have to close entirely. Akunowicz first heard the news while gathered with her staff at the restaurant.

“Everyone was there for a party. And I had to tell my entire staff that they were now unemployed,” Akunowicz says. “We had just been open for a year, and we had such a great first year. That was one of the hardest things I’ve ever had to do. I had to look at all of them and tell them they didn’t have a job anymore. That was just so heartbreaking.” 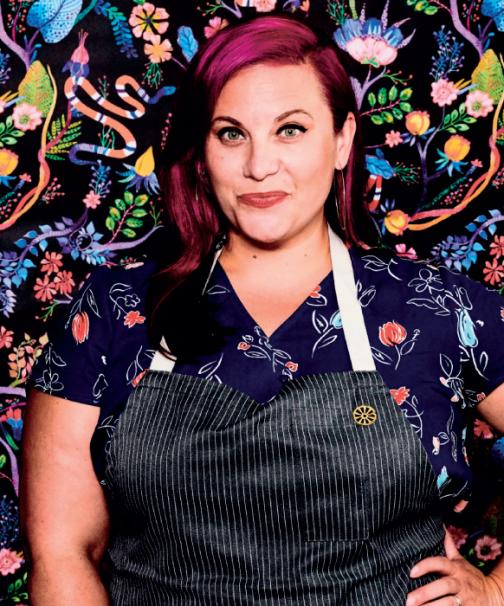 Favorite tool: At home, I use my immersion blender a ton.

Restaurant industry in a word: Vibrant, but right now, hurting.

Chef you’d like to work with: The entire ‘Top Chef’ cast of season 17 All Stars.

Hope for 2021: A vaccine. I’m hoping that some progress and some healing can happen.

Akunowicz wasted no time planning for a new strategy—she even started while the party was still in progress. She attributes the brand’s status as a relative newcomer as one key reason why it could adapt to the unusual situation so quickly.

“We were little enough, scrappy enough, new enough, and still had that figuring-it-out muscle memory that we have been able to pivot and then pivot again,” she says.

By the time the party ended, she had created Fox Pasta, a take-home concept offering fresh pasta and sauces. It didn’t take long for word to spread among guests and the South Boston area. Soon the house-made, wholesale pasta was flying off the proverbial shelves.

“We started selling 75 pounds of fresh pasta a day,” Akunowicz says. “No joke, we could not keep it in stock. We were selling out every day, and people would still be like, ‘I can’t order anymore?’”

The restaurant didn’t limit its take-home items to pasta; it also sold baguettes, olive oil, and pantry items such as flour. But even with Fox & the Knife’s array of takeout food and products, Akunowicz says Fox Pasta has had a life of its own. The brand even partnered with online marketplace Goldbelly to bring Fox Pasta to the national marketplace.

Akunowicz’s extensive experience with pasta goes back to 2008, when she spent a year working as a pasta maker in Modena, Italy. The experience, she says, shaped her both in and out of the kitchen.

“It taught me a lot about who I was as a person, as well,” Akunowicz says. “And I think that was very formative and shaped a lot of who I am today as a chef.”

After spending time honing her craft in Italy, she came back to the U.S. in 2009, where she worked at Middle Eastern concept Oleana as a sous chef. She then spent a year working in the nonprofit sector before Christopher Myers of Myers + Chang encouraged her to return to the restaurant industry. Akunowicz joined Myers + Chang in 2011 as the executive chef, rising to business partner three years later.

After winning the James Beard Award for Best Chef: Northeast in 2018 for her work at Myers+Chang, Akunowicz opened Fox & the Knife in 2019 as a love letter to her time in Italy’s Emilia-Romagna region. While she employs many of the traditional techniques celebrated in that cuisine—especially pasta making—she also adds her own touches, including more global flavors and ingredients.

“There is lemongrass and lime leaf in my pesto,” she says. “So while that’s certainly personal and not traditional, it’s never for shock value. It’s more about things that make sense in my head, whether it’s from my travels or my studies or the food that I’ve cooked before.”

But before Akunowicz used her culinary expertise for her restaurant’s survival, she gained experience innovating dishes on reality television, appearing on seasons 13 and 17 of Bravo channel’s “Top Chef.”

“Competing on ‘Top Chef’ is very hard. Going back for an all-star season was very hard,” Akunowicz says. “It’s kind of boot camp in a way, and you learn so much from the chefs that you work with and the folks that you cook with; you learn from a judge’s feedback.”

For her, the value of her time on “Top Chef” went beyond culinary lessons. As a chef who identifies as female and a member of the LGBTQ community, Akunowicz says she owes it to the next generation of people to be visible on a platform as mainstream as television. Her appearance does seem to have made an impact: Akunowicz says people from all over the country have visited her at Myers + Chang and Fox & the Knife, thanking her for the things she’s said and done on television.

And though the pandemic came as “Top Chef” season 17 was airing, Akunowicz counts herself lucky to have experienced it.

“You get to connect and touch so many people [through television],” Akunowicz says. “Especially these days when we can’t connect with anybody.”

Throughout the winter months, she anticipates Fox & the Knife’s challenges to be similar to the ones she faced last March, April, and May. But for Akunowicz, the best way to get through the pandemic is to look ahead. She is now busily working on her second restaurant and second cookbook. While she acknowledges some of her plans may fall away, she says she has to keep building, creating, and coming up with new ideas to push forward.