The acclaimed chef shares why he decided to add brunch a year and a half after opening Handsome Hog.
November 2018 Beth Kanter

“My food memories are all over the place,” says chef Justin Sutherland of Minnesota’s Handsome Hog, a contemporary Southern restaurant in St. Paul, and Pearl and the Thief, a Southern-style whiskey and oyster bar in Stillwater. He remembers asking for an Easy-Bake Oven at age 5 and can vividly recall watching his maternal grandmother compete in her home kitchen with “Yan Can Cook” playing on Minnesota’s public television station.

“My grandma on my mom’s side is from Japan, so I grew up eating a lot of traditional Japanese influence. Tonkotsu and sukiyaki were mine and my little brother’s favorites things she made. My grandpa, her husband, is Norwegian. So, when she moved here from Japan, she learned how to cook meat and potatoes and was really big on the classic Midwest stuff he loved like meatloaf, pot roast, and spare ribs. That was the food he grew up on, so she tried to cook it for him. She also tried to make sure we would eat her food as well.”

Sutherland’s paternal side added more stripes to his family’s food rainbow. His grandmother on his dad’s side hails from Mississippi and embraced Southern food traditions in her home. “There was always a pile of collard greens at my dad’s mom’s house, so, every time I see them, even now, it very much reminds me of her,” he says. “My dad’s mother was very much about soul food.” 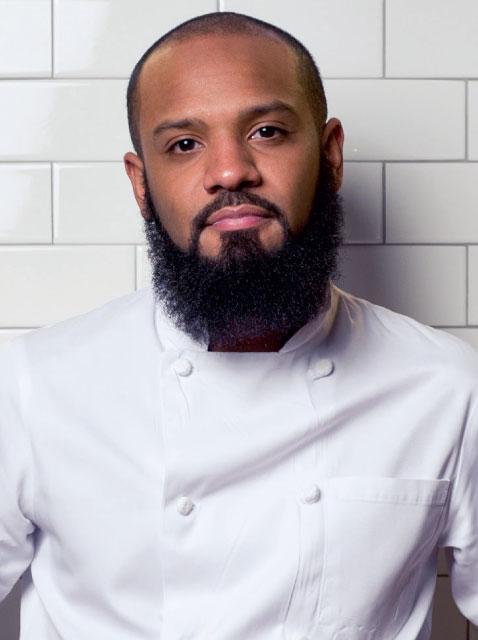 Sutherland is a graduate of Le Cordon Bleu College of Culinary Arts in Atlanta and competed on and won Iron Chef earlier this year.

Contemporary soul food inspired by what his dad’s mother made drives the menu at the Handsome Hog, although his Japanese culinary roots from his other grandmother also make guest appearances from time to time. “I always like to do some sort of ramen-inspired dishes for specials,” Sutherland says. “There are hints of Japanese influence speckled throughout.”

Handsome Hog’s soul food approach is one that Sutherland says easily translated to Sunday brunch when the eatery introduced the service about a year-and-a-half after it opened. “A lot of stuff on our menu is very conducive to brunch,” he says. “Throw a poached egg on your shrimp and grits and there it is.”

Although Sutherland makes it sound easy, the Handsome Hog’s shrimp and grits dish hardly registers as simple. He uses Gulf shrimp to create the menu staple that also includes English peas, summer squash, sweet corn, Cajun butter, and lemon. White cheddar grits round it all out. The Midwestern restaurant sources its grains, grits, cornmeal, rice, and other ingredients from down South and uses them across its menus. Because of this, there was no significant inventory change needed—other than quantities—when the team rolled out brunch.

“I like to keep brunch menus simple,” Sutherland says, adding that the customer response to the new menu has been extremely positive. “I think there are a few key points you’ve got to hit and then you add a few things in everyone likes. I like to keep it small and do it well.”

Chicken and waffles easily won its spot on his brunch menu. The dish is served with pickled peaches, bourbon maple syrup, cayenne honey butter, and home fries. The pickled fruit changes seasonally and is part of the ongoing in-house pickling effort that includes okra, green tomatoes, plums, and black raspberries.

In addition to its flavor profiles, Sutherland also attributes part of the success of Handsome Hog’s brunch program to not unveiling it right away. “I wanted to wait until everything else was dialed in right before adding that whole other menu,” he says.

Staffing stands as one of the more challenging aspects he has encountered with the service. Finding reliable cooks who not only like the shift but also can be up and ready at 7 a.m. on a Sunday can be a tall order. “It’s the kind of shift where you can’t have a lot of cooks,” he explains, adding that he loved the shift when he was starting out in his career. “Margins are slim on brunch. You are selling eggs and waffles. It really has to be a two- to three-person crew that can just bang it out for three or four hours. You are not cooking steaks and proteins that take 20 minutes or so. It’s nonstop.”

His biggest piece of brunch staffing advice boils down to, Hold on to good ones. “Once you find someone that likes it and is good at it, take care of them,” he says. “Keep them.”

“She comes to both restaurants often,” he says, referencing his maternal grandmother. “Everyone knows her. It’s hilarious. She will just walk right into the kitchen. She’s a four-foot-ten little feisty Japanese woman [who] doesn’t bite her tongue if she has something to say. … She just likes to make her presence known,” he says.