Served alongside Anchovy bread, Marinated sweet and spicy peppers are topped with shaved provolone and a dollop of butter.

It’s been a long year-plus for Jason Vincent. Like most restaurant owners, the Chicago-based chef has struggled to navigate the pandemic, and trying to keep two restaurants afloat has been no easy task. Vincent, the chef and co-owner of Giant and Chef’s Special Cocktail Bar, has had to make strategic pivots in his restaurant operations to keep the doors open. Vincent has also undergone some other pivots of a more personal nature; he stopped drinking altogether more than two years ago and has maintained his sobriety ever since.

Growing up in Cleveland, Vincent says he found a sense of purpose working in kitchens throughout high school. While other kids were playing organized sports or doing homework, he was working, first at a local Chinese restaurant and then a Jewish deli. He eventually found himself washing dishes at a nearby pizza parlor, where Vincent says he learned a lot. 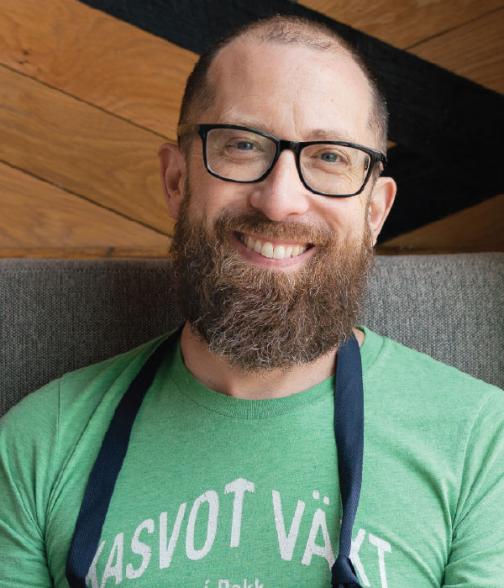 Chef You’d most like to work with: Toni Tipton-Martin (author of The Jemima Code)

Hope for the future: Equity

“For somebody who didn’t like school and high school specifically, I could go there after school and either be in my own head washing dishes for five hours of work or talk to people, and it was up to me,” Vincent says. “It was freeing in a way. … There was a lot of humanity.”

After finishing school, Vincent  honed his craft while bouncing around various cities, including Portland, Maine, where he worked at the award-winning Fore Street. But, homesick for the Midwest, he moved to Chicago, where he joined chef Jason Hammel’s Lula Café. When Hammel opened a new concept, Nightwood, Vincent was the head chef, earning the restaurant Michelin Bib Gourmand awards.

In 2014, Vincent took a hiatus from the restaurant world, but when he returned in 2016, he came back swinging. He teamed up with fellow chef and Lula alum, Ben Lustbader, as well as beverage director Josh Perlman, formerly of Avec, to create a new restaurant. At Giant (which is named for a Shel Silverstein poem), Vincent wanted the concept to feature Midwestern flavors. But what exactly qualifies as Midwestern cuisine is something he’s still trying to figure out.

“We don’t know,” he says. “We take a very agnostic approach to that question. We have some crowd pleasers on the menu because that’s the food that people want. We also have some weird food and people like that, too. There’s a good lesson here for people opening restaurants in the Midwest. There’s nothing wrong with giving people what they want if it fills the seats. Making food that people like is going to pay the bills.”

This is the same utilitarian strategy the chef applied when the pandemic forced Giant to close. Historically, the menu featured elevated takes on hearty fare, like deep-fried soft shell crab, saffron tagliatelle, and pecan-smoked baby back ribs. Before reopening, Vincent had to formulate a plan that would maintain quality and flavor—something he says is the most important part of cooking—but also follow shifting consumer preferences and COVID-era constraints.

While trying to figure out what to include on the menu when Giant reopened, Vincent was in contact with his former boss who owned the Cleveland pizza parlor where he washed dishes so many years ago.

“His business was only down 3 percent,” Vincent says. “He told me, ‘Dude, it’s pizza. Everyone wants pepperoni pizza right now.’ And it made sense. People wanted comfort food in a time of great discomfort.”

With that advice in mind, the chef altered Giant’s menu to make sure customers could find something they recognized as familiar, like pasta dishes and onion rings. The restaurant even started selling pizza.

The menu isn’t the only thing Vincent changed. He bumped all of his worker’s pay up to $20 per hour and made sure they weren’t being overworked.

“That means I make less money, and the investors make less money, but so what?” Vincent says. The chef remains more concerned about his staff’s well-being than he is his own paycheck. He says this people-first approach is why his establishments have managed to stay fully staffed while other restaurants are struggling to fill positions.

“You take care of people, and they work,” he adds. “Their jobs are hard, but we make sure we pay them adequately for it.”

The obstacles Vincent faced in the early days of the pandemic were also compounded by the fact that his second restaurant, Chef’s Special Cocktail Bar, had only been open for six weeks before everything had to shut down. The concept was inspired by his love of Chinese takeout, and the chef maintains that nothing goes better with Chinese food than a good cocktail.

But even though Chef’s Special didn’t have the established reputation of its sister Giant, it did have one major advantage. Inspired by the dishes Vincent says he grew up eating as a kid in Cleveland, the menu consists mainly of Americanized Chinese foods, which are ideally suited for takeout. The menu includes mainstays like potstickers, crab rangoons, and lo mein, as well as some unconventional items including chilli-crisp cauliflower, walnut shrimp, and maple tofu with ground pork.

“It can be overly salty and sweet, but it’s delicious and people are familiar with it,” he says. “It’s also the perfect takeout food, which everyone wanted while we were all locked down.”

As of late summer, the restaurants were doing much better; service had resumed and the dining rooms were filling up. Business was mostly breaking even, which, Vincent says, felt like they were finally coming out the other side.

Even though Vincent now co-owns and operates a cocktail bar, he hasn’t had any of the restaurant’s alcoholic libations.

“At the end of my drinking, I was polishing off a bottle of whiskey or more a night,” Vincent says. “I’ve got a 7-year-old and a 10-year-old and a wife and two businesses and a puppy and a house, so the drinking had to go.”

This self-awareness also informs how Vincent keeps an eye on his team members, making sure that throughout the crisis, they’ve been all right. A huge proponent of mental health, Vincent says it’s crucial for owners to regularly check in with their staff. If employers don’t do that, they should be paying for therapy, he says.

“If we want to take the restaurant industry from this messed-up place to a healthy environment, the head of the company needs to be available,” Vincent says. “We can’t take advantage of people anymore.”