Prior to the pandemic, Chef Erik Bruner-Yang was best known for his inventive, globally inspired dishes, like Maketto Fried Chicken with five-spice caramel.

The program kicked off at the end of March—a mere two weeks after restaurants around the country shut down.

Even under normal circumstances, Erik Bruner-Yang is a very busy man. The chef and restaurateur is the creative force behind such celebrated D.C. institutions as Maketto, Brothers and Sisters, Spoken English, and Café Spoken, as well as the executive chef at the burgeoning fast casual &pizza. He’s also a father of three.

Despite an already full plate, Bruner-Yang didn’t hesitate to take on more when the pandemic hit. Though the chef is renowned for his creative side—namely, dreaming up one-of-a-kind dishes with influences from a variety of cuisines and cultures—he also has a flair for numbers. In April, Bruner-Yang founded The Power of 10 Initiative, a scalable approach to supporting restaurant workers and local communities through the financially grim days of COVID-19. For as complicated and nuanced as restaurant bookkeeping may be, it turns out that the number 10 works into a golden ratio wherein $10,000 per week in donations helps secure 1,000 free meals and create 10 full-time foodservice jobs. 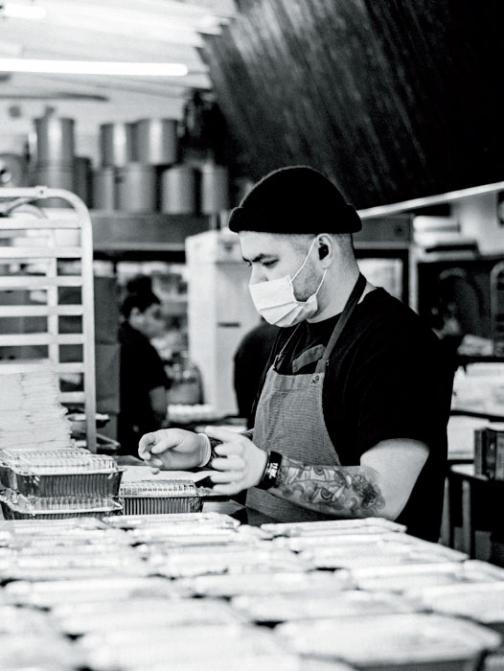 At press time, Bruner-Yang’s Power of 10 Initiative has donated more than 200,000 meals.

“It’s been a great exercise in some trickle-up economics and keeping as much money as possible within our communities,” Bruner-Yang says. Donations start at $10, which pays for one meal and go up to 10 times that amount. “The math of The Power of 10 is great. D.C. has a higher minimum wage than a lot of states, but you could use that platform anywhere in America, and the numbers would still be the same.”

The program kicked off at the end of March—a mere two weeks after restaurants around the country shut down. Two of Bruner-Yang’s restaurants, Maketto and ABC Pony, were among the originals in the pilot program, as well as fellow D.C. concept Cane from chef Peter Prime. At first Bruner-Yang was reluctant to involve his own restaurants so early on; he feared it would paint the whole program in a self-serving light. Those worries quickly proved unfounded as the community rallied behind the initiative. In June, it even landed a corporate sponsorship—something Bruner-Yang had aspired for since the beginning—with Capital One.

“With that sponsorship, we were able to expand to eight cities. So far, more than 40 restaurants have participated in The Power of 10,” he says. “The work itself is super-rewarding. The reason why we do it is just being able to help people and connect communities.”

Building relationships with guests, forming partnerships with others in the industry, and serving the community beyond a restaurant’s four walls are nothing new for Bruner-Yang. Long before COVID-19, his restaurants provided meals to hospitals, children’s centers, food banks, schools, and more. When protests erupted across D.C. in the summer, the chef was all too happy to keep the activists fed; as he pointed out, many of those with the time to attend the rallies and marches had been furloughed or laid off.

So while The Power of 10 is a logical extension of Bruner-Yang’s philanthropic work, what’s different about this project is its scale, as well as the chef’s dogged promotion of it.

In the past, he has shied away from the limelight, but when the pandemic struck, it was important for him to take a more prominent role. He looked to other industry leaders and friends, like José Andrés with World Central Kitchen and &pizza founder and CEO Michael Lastoria’s Hero Pie Program, for insights in using his chef star power to effect positive change.

“For me, who usually keeps a pretty low profile but has access [to resources and platforms] and is also still an independent, small restaurant owner, we have to look out for each other,” he says. High-profile chefs and those garnering media attention have the opportunity—and arguably, the responsibility—to help people who might otherwise go unseen and unheard, he adds.

As far as culinary chops, Bruner-Yang first burst into the D.C. dining scene in 2011 when he opened Toki Underground, which introduced the city to ramen that was a far cry from the ubiquitous, shelf-stable noodle packets. Four years later, Maketto made its debut, taking inspiration from both Cambodian and Taiwanese cuisine. That same year marked the first of a trio of James Beard Foundation nominations; he was a nominee for Rising Star Chef in 2015 and later a semifinalist for Best Chef: Mid-Atlantic in 2016 and 2019.

Through a partnership with The Line Hotel, the chef tried his hand at American eats, with a twist, in 2017. Similar to how Asian cuisines are uniquely interpreted within the U.S., Brothers and Sisters served American fare as viewed through the lens of an Asian country. Its success led to two more concepts with The Line Hotel: Spoken English, inspired by Japanese tachinomiya (standing bars), and Café Spoken, modeled after Japanese coffee/teahouses.

At press time, all of his restaurants were offering some sort of service, whether it be carryout and delivery or limited-seating dine-in, the latter of which resumed in early September. At that point, cases in D.C. were leveling off and as Bruner-Yang says, “At some point in time, you’ve got to get your feet wet a little bit.”

Given his extensive repertoire and willingness to play with new cuisines and traditions, the chef is almost certain to add more restaurants to his collection once COVID-19 becomes a thing of the past. But whatever the new normal looks like, he hopes The Power of 10 and similar initiatives will continue. After all, those programs forge strong ties within the community and among other foodservice operators while also helping restaurants shore up, should another crisis come knocking.

“I would personally love to continue the work of The Power of 10—pandemic or not,” he says. “I think what we will actually see is a lot more chef-driven charity organizations that help create social safety nets within our own community to make sure that if there was ever a massive economic stoppage like this again, we’ll all be super-prepared for it.”