Eileen Andrade is the chef and restaurateur behind three of Miami’s most celebrated fusion restaurants: Finka Table & Tap, Amelia’s 1931, and Barbakoa, the last of which just opened last fall. But well before she was featured in Zagat Miami’s 30 under 30 and on Hola! magazine’s Top 100 Latina Powerhouse list, Andrade was pursuing another hands-on, creative career: fashion.

“Growing up, my friends always called me the trendsetter of the group,” she says. “I love fashion. I love being around creatives all the time.”

Food, on the other hand, didn’t interest her much, even though her parents owned a restaurant and she would regularly cook with her grandparents. When it came time to apply to colleges, she targeted the Miami International University of Art & Design.

“I got to study textiles, budgets, and all that fun stuff,” she says. “I loved it.” 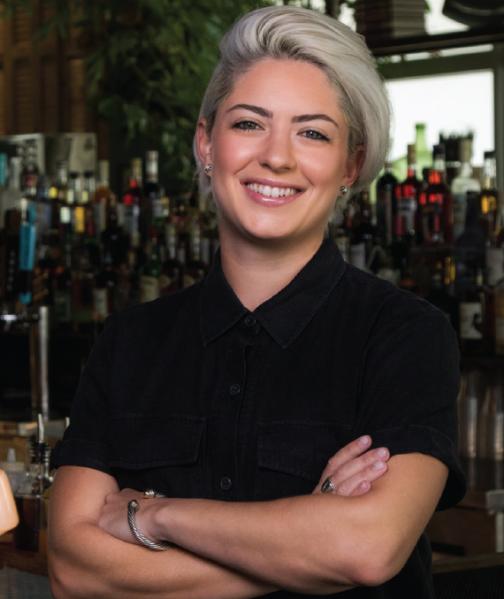 Chef you’d most like to work with: José Andrés

While attending college, Andrade worked as a stylist, cutting her teeth in the fashion world. But in terms of the amount and consistency of her paychecks, the job left something to be desired. Even bussing the tables at her parents’ restaurant and doing DJ gigs as a teen allowed her more financial independence than the stylist gig.

“Working for someone and not really having any money coming in was really stressing me out,” she says. “So, I talked to my mom about it, and she told me to come back and work at the restaurant.”

After some serious consideration and realizing she would have to move to either Los Angeles or New York City to make any real money in the fashion world, Andrade decided to take her mother’s advice.

At 19, Andrade said good-bye to the fashion world and began working at Islas Canarias, her parents’ well-known Cuban Restaurant, which she describes as a “staple here in Miami.” Islas Canarias (a nod to the Canary Islands off the coast of Africa) was originally founded by her grandparents, who immigrated to the U.S. from Cuba in the 1970s.

At the restaurant, Andrade started with the basics. Her mother taught her how to make empanadas, bocaditos, pastelitos, and other simple dishes. A fast learner, she quickly climbed the ranks and began splitting her time between the kitchen and the front of house, where she managed staff, some of whom were twice her age.

Ready for more of a challenge, she sought the tutelage of Islas Canarias’ executive chef Omar Caycho, who taught her the techniques she would need to become a full-fledged chef. It was during this time that Andrade developed a lasting passion for cooking.

And though the kitchen had enchanted her, Andrade was still interested in the operational side of foodservice. In 2011, she and her brother Jon struck out on their own to open a food truck named Cuban Cube, which, true to its name, served many of the dishes she had made at her parents’ restaurant. The experience offered her that first taste of being a business owner.

As she grew into her new role as a chef, Andrade found that her innate sense of style carried over into the kitchen. With fashion, Andrade mixed and matched textiles, colors, and patterns, transforming them into one-of-a-kind apparel. Cooking gave her the same type of outlet, she says, but instead of fabrics, she was layering ingredients and flavors.

This affinity shows up time and again on the menu at Finka Table & Tap, her first brick-and-mortar restaurant. Finka, which opened in 2014, features eclectic dishes inspired by her time in her parents’ restaurant and her travels to Korea. “When I travel, I get a little spark,” she says. “I’ll see something and take a picture of whatever I had and when I come back home, I try to do something similar. I’m a curious person.”

Though Andrade enjoys “clashing” ingredients, the combinations always end up being harmonious, if not a bit unexpected. For example, the restaurant’s Korean Japchae Noodles are paired with vaca frita, bok choy, zucchini, carrots, scallions, and sesame seeds. Influences from other cuisines also pop up. One starter, the Fried Alligator Jalea, puts a decidedly Floridian spin on the classic Peruvian seafood dish. The prosciutto pizza incorporates ingredients from Italy, Spain (manchego cheese and truffled honey), and the Americas (sweet potato).

Her subsequent restaurants, Amelia’s 1931 and Barbakoa, also embrace Korean and Latin American flavors. Named after her grandmother, Amelia’s 1931 has been described by Andrade as a “cozy Cuban diner,” though fusion still plays a strong part, as evidenced through comfort foods like the Korean-fried chicken with avocado salad, maduros, and white rice. Barbakoa by Finka, embodies the spirit of her original restaurant, but with a slew of new dishes, like the Korean BBQ Grilled Octopus and the wok-fried okra.

Andrade’s appreciation for all things Korean comes from the time she spent overseas visiting a friend who lived in South Korea. She says she was immediately awed by the country’s fashion and flavors, in part because it was so unlike anything she had experienced before.

“Right away I fell in love with the food and the fashion, partly because they had clothes that actually fit me,” she says. Andrade is petite in stature though her easy confidence exudes a commanding presence.

The chef spent much of her time abroad taking cooking classes from a woman who spoke English and taught her foundational Korean techniques, such as pickling and how to utilize heat at moderate levels. Andrade says pickling and spicy ingredients aren’t commonly used in Cuban cooking, which is something she found so enticing about classic Korean dishes.

“As Cubans, we don’t like spicy, but I like spicy,” she says. “We don’t do anything similar in our country. We don’t pickle anything; we don’t use hot peppers. So being able to draw from Korean ingredients really helps kick Cuban food up a bit.”

After weathering the many pandemic-related pressures, Andrade has her sights set on the future. She has immediate plans of expanding Amelia’s by adding 100 seats and a full bar. The addition comes as diners are back out in full force and Miami’s dining scene is starting to return to pre-pandemic levels. She and her girlfriend have also discussed opening a new bar but says that dream won’t come to fruition for several years.

The chef says for now, three restaurants and a renovation provide plenty of responsibilities. She adds if she does decide to open another concept, it will definitely be in Miami. As one of the city’s third-generation chefs and restaurant owners, she doesn’t envision herself anywhere else.

“Miami is home,” she says. “We should be finishing the renovations this year, and it’s going to be beautiful. As long as I’m doing something creative, I love it.”