Wagyu beef tongue atop a johnnycake with saurkraut kimchi at 610 Magnolia.

When the pandemic struck, chef Edward Lee stepped up to help restaurant workers.

Chef Edward Lee is used to spinning a lot of plates. He is the chef and owner of 610 Magnolia, MilkWood, and Whiskey Dry, all in Louisville, Kentucky. He is the culinary director of Succotash in National Harbor, Maryland, and Washington, D.C. He’s written two books, Smoke & Pickles and the Buttermilk Graffiti, and a documentary, Fermented, which he also hosted. And he’s the cofounder of The LEE (Let’s Empower Employment) Initiative, a set of programs started in 2015 to encourage diversity in the full-service space.

This year, in response to the coronavirus pandemic, Lee has pivoted entirely out of his kitchens and into the fray, adding a couple more plates to his already-packed rotation in the form of two restaurant-assistance programs, which he feels he and other chefs are best suited to support. 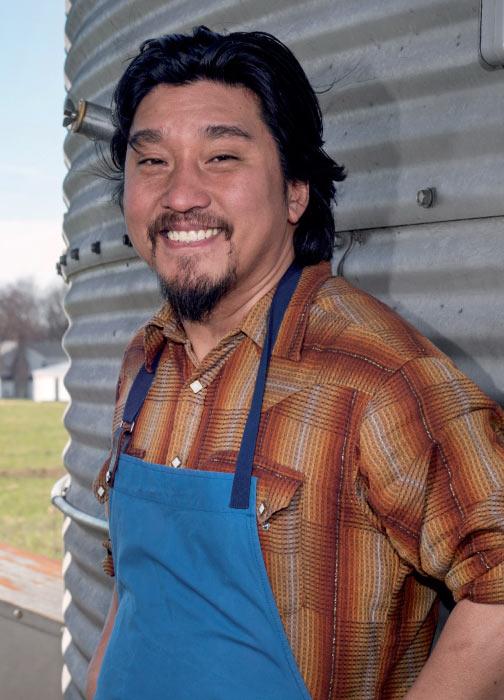 “Chefs should utilize their skills right now; with a little bit of money and a few ingredients, we can create healthy, nutritious meals for people,” he says. “Not fancy meals, but ones that are feeding a lot of people and doing a lot of good. It’s the perfect thing for a chef to do at this time.”

In partnership with The LEE Initiative and Maker’s Mark Bourbon, Lee launched the Restaurant Workers Relief Program in March, offering meals and other supplies to unemployed foodservice employees. The program took off: By mid-May, more than 200,000 meals had been served by partnering restaurants across the nation.

Then, in June, the Restaurant Reboot Relief Program was put into action. The program, kick-started by Lee and The LEE Initiative’s director, Lindsey Ofcacek, has committed at least $1 million to purchasing food from sustainable farmers in various regions of the U.S. The fresh ingredients are then donated directly to concepts in the same location as the farms.

At the center of both programs is an attitude of collaboration and action that mirrors the approach Lee has taken to his own career. The chef has a finger in every proverbial pie, as evidenced by his James Beard Award for Buttermilk Graffiti, his Emmy nomination for his role on television series “The Mind of a Chef,” and his position at the helm of concepts in various cities.

Since 2015, The LEE Initiative’s reach has been similarly sprawling and ambitious, and the organization provided a solid foundation for the new pandemic programs to quickly take hold across the U.S. The Restaurant Workers Relief Program grew to encompass 19 restaurant partners just weeks after its founding. This network enabled restaurant employees in cities in every region of the U.S.—from Atlanta to Boston to Chicago to San Francisco—to receive free to-go meals and other essential household supplies every day of the week.

After Lee established the program for restaurant employees, he turned his attention to other key areas of the restaurant business that were being ravaged by the pandemic and realized that small farms and restaurant supply chains were in various stages of disruption. This realization spurred the Restaurant Reboot Relief Program, which is phase 2 of The LEE Initiative coronavirus response.

“As we were able to help these restaurants survive during the crisis, we realized we’d still be facing a crisis once restaurants were able to reopen,” Lee previously said in a release. “The entire supply chain is broken and by investing in small farmers, we hope to help to repair it and allow farmers and restaurants to rebuild together.”

The Restaurant Reboot Relief Program was up and running in 16 regions just after it started in June. This second effort utilizes the web of restaurant-partner outposts already in place thanks to the Restaurant Workers Relief Program; the food purchased from sustainable farms is given first to the concepts in each region that are already relief centers for out-of-work employees. These restaurants then select other local establishments that will also receive some of the food, taking out any guesswork on behalf of Lee or The LEE Initiative.

An uncertain future still looms for the industry, even after months of the pandemic. Lee plans to face this uncertainty by taking things slowly—and keeping both COVID-response programs in operation for as long as possible.

The Restaurant Reboot Relief Program will continue for at least one year. And the 19 restaurants-turned-relief-centers that are part of the program will continue to hand out meals and supplies on a first-come, first-serve basis until resources are no longer available. After all, no one is better equipped to feed people than a group of skilled chefs.

“This crisis doesn’t have an end in sight, and we’re committed to supporting our colleagues, family, and friends throughout the entirety of this. We’re in it together,” Lee said in a release.

As for Lee’s personal culinary journey? He isn’t sure what the future will bring, but says that, aside from bringing his staff back, what he’s looking forward to most post-pandemic is getting back to work. The coronavirus has not only impacted full-service restaurants—including Lee’s own modern Southern eatery, 610 Magnolia; Korean-Southern kitchen, MilkWood; whiskey and burger bar, Whiskey Dry; and progressive Southern spot, Succotash—but also the chefs who helm these restaurants.

“I have not cooked in a restaurant in months, so I don’t know what that will look like after this,” Lee says. “You’ll have to ask me about that again in six months.”