Long before chef David Lee launched vegan concept Planta in Toronto, he’d developed a passion for fresh, local bounty. From ages 6 to 10, Lee grew up on the island nation of Mauritius, located off the coast of Madagascar, and many of his days were spent cooking in his grandfather’s kitchen.

“For me, the kitchen was one of the most comfortable places. At the age of 10, we moved back to England, and by the age of 16, I knew exactly what I wanted to do,” Lee says.

Lee’s appreciation for the culinary arts grew as he amassed more training and experiences, including stints at the InterContinental’s Le Soufflé restaurant in London and Hotel Fleur du Lac on Lake Geneva in Switzerland. Eventually he set his sights on a new destination: Canada. 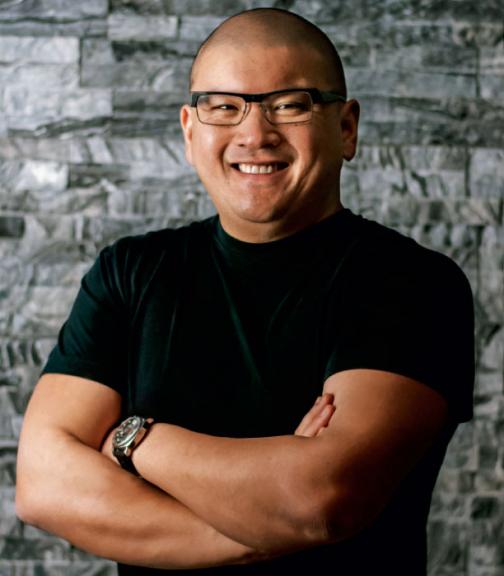 Restaurant Industry in a word: Community.

Chef you’d like to work with: My grandparents.They showed me how to respect and to use ingredients.

Most underrated dish: Vegetables. So underrated, but there’s so much that you could do to them.

Hope for 2021: Serve the community with more Planta locations and put COVID behind us.

“I just fell in love with everything Canada has to offer,” Lee says, adding that in addition to his migration to Canada he also aspired to open a restaurant by the time he was 29.

So in 1994, Lee hopped across the proverbial pond and began his North American culinary career as the chef de cuisine of Centro Toronto before acquiring Splendido in 2001 with business partner Yannick Bigourdan. While achieving this professional milestone, he had a personal wake-up call that would change his future.

Over the years, Lee had gained 50 pounds and after consulting with a doctor, he decided to move toward a plant-based diet. Despite the shift in his own eating habits, Lee continued to work with cuisines that relied heavily on animal proteins and dairy, including Italian concept Nota Bene and barbecue spot The Carbon Bar. But eventually his decision to go plant-based led him to open a vegan establishment.

The chef teamed up with Chase Hospitality Group CEO Steven Salm to create the first very first Planta location, which debuted in the Toronto neighborhood of Yorkville. Although it was an affluent area, Lee knew he faced a specific challenge, namely how to build a menu that appealed to consumers who weren’t accustomed to plant-based dishes. That meant finding ingredients that imbued dishes with flavor, texture, and body, without resorting to artificial ingredients.

“The ingredients do speak for themselves, and they do come out,” Lee says. “It’s very easy to cook a chicken. You add salt and pepper, and then you put it in the oven. It tastes good. But you can’t do that to a carrot.”

Lee’s hard work perfecting the menu quickly yielded fruit. Planta’s menu is anchored in a variety of pizza and pasta dishes, but it also serves a signature burger, as well as lettuce wraps and small plates like cauliflower tots and charred broccoli with chilie oil. The restaurant made quite the splash and incentivized the chef to continue playing around with plant-based cuisines in a casual setting.

Since then, Chase Hospitality has opened different Planta variations as a way to showcase the broad range of veggie-centric dishes across different cuisines. Planta Cocina offers a plant-based twist on Mexican classics with menu items like the Baja Mushroom Tacos and BBQ Jackfruit Taquitos. Planta Queen has built a successful sushi program through unique swaps, such as “ahi” watermelon standing in for the fish. Another spin-off, Planta Burger slings hearty dishes like the Kentucky Burger, with “chicken” fried mushrooms, tofu steak, lettuce, pickles, aioli, and barbecue spice.

The newest opening is not only the second Planta Queen, it is also the second U.S. outpost. Located in the Coconut Grove suburb of Miami, the restaurant made its debut in November despite the difficulties imposed by the pandemic. The brand is also slated to introduce Planta to the greater Washington, D.C., area, this summer, and a New York store may not be far behind it.

At present, the Planta brand has half a dozen locations with four in Toronto and two in the greater Miami area. For Lee, toggling between two countries opens the door for him to form partnerships with more growers in two very distinct climates. Through these networks, Planta can add local flair to its menus based on readily available ingredients.

As far as digital business is concerned, COVID-19 may have strengthened Planta. Last year the company started shipping certain foods across the U.S. and Canada in light of tightened travel restrictions. The virtual shop, Planta at Home, sells signature dishes, bundles, and pantry items. This retail arm not only expands the brand’s customer base, it also serves as an introduction to Planta and paves the way for future growth across North America.

And although many consumers retreated to more indulgent comfort foods during the pandemic, Lee still predicts the plant-based movement will continue to grow, especially as more restaurants like his introduce the cuisine and educate consumers.

“Seeing the surge in the plant-based growth, I think that this isn’t something that’s going to go away. When I look at the younger generation and the older generation, too, I think plant-based is for everyone,” Lee says. “You can’t eat burgers and fries seven days a week. You have to be good to your body. It’s what people want—and that’s what we’re seeing.”