At Superchefs, the eggs benedict is anchored by a pair of deep-fried cheese grit cakes.

As a kid, Darnell ‘Superchef’ Ferguson would watch cooking shows and imagine himself one day starring in his very own TV program. His favorite host was Emeril Lagasse, because, as Ferguson says, the chef’s cheery and energetic personality on “Emeril Live” captured his imagination.

“As soon as I watched Emeril, I knew that my destiny was to be on television,” Ferguson says.

Today, Ferguson is the chef and owner of several restaurants, including breakfast concepts SuperChefs in Kentucky and Superhero Chefs in Alabama; seafood-centric Tha Drippin Crab in Kentucky; and sports-themed Stadium in Ohio. Over the years, he’s also appeared on a number of shows, including “The Rachael Ray Show,” “Beat Bobby Flay,” and Guy Fieri’s “Tournament of Champions,” where he bested world-renowned chef Alex Guarnaschelli.

Ferguson’s journey to the kitchen began in high school. After taking cooking classes as a senior, he chose to attend Sullivan University, which offers degrees in culinary arts and hospitality studies. After graduating in 2008, Ferguson was selected to be a chef at the Beijing Olympics for Team USA, which he describes as a pivotal moment in his career. After all, he was one of only about 30 students nationwide to participate. 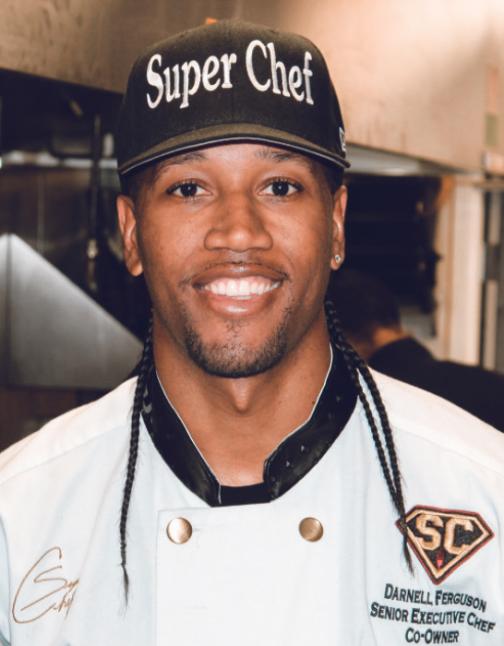 “Being selected to cook at the Olympics was major,” he says. “It really felt like I was being recognized for my talents. Not many people get to say they cooked at the Olympics.”

Upon his return, he would land a job at Napa River Grill in Louisville, and it seemed as if Ferguson was on the fast-track to become the next big thing in River City.

But by 2009, after a series of missteps that included selling illicit drugs, Ferguson found himself in and out of jail and living in his car.

“Sometimes you just have to get stronger in those challenging situations,” he says. “Living in my car was probably one of the best things to ever happen to me. I told myself, ‘I’m never coming back here. I’m never going backwards again. I’m just going to cook.’”

So Ferguson refocused his energy into his work as a chef and found employment at some of Louisville’s best-known restaurants like Eddie Merlot’s, Oakroom at the Seelbach Hilton, and Poof on Main, where he would perfect his craft and develop an intense work ethic.

“Cooking is so transformative,” he says. “Your life can absolutely change in a kitchen.”

In 2012, Ferguson launched a pop-up focusing on his favorite meal: breakfast. Its success led him back to Columbus, Ohio, where he opened brick-and-mortar restaurant SuperChef’s with childhood friend Ryan Bryson and another partner, James Dawson. They went on to open a second Columbus-area unit in the suburb of Gahanna.

The trio eventually disbanded, with Ferguson returning to Louisville to open his own SuperChefs in 2015 and later stepping down from the Ohio business.

SuperChefs stays true to its name, thanks to dishes named after superheroes and villains, like the Hulk Green Waffle Sandwich (with sausage, candied bacon, mozzarella, and scrambled eggs) and the Sub Zero, which layers blueberry pancakes with lemon-mascarpone sauce. Even the menus are styled like comic books.

“At one point, I needed to be the superhero in my own life,” Ferguson says. “We wanted to brand ourselves in a way that would make everybody feel welcome, and using superheroes is how we do that.”

A group of investors from Alabama took notice of the Louisville location and convinced Ferguson to open his next restaurant in Tuscumbia, Alabama. The Tuscumbia store debuted in 2019, and another Alabama location, this one in Huntsville, followed earlier this year.

“The Huntsville location is doing great,” he says. “We’re actually looking for a second location in Huntsville now.”

Because Ferguson broke with his business partners, the Alabama locations are called Superhero Chefs to avoid trademark issues. (Nevertheless, the chef has legally changed his middle name to SuperChef, allowing him to continue operating the Louisville location under the original name.)

Ferguson describes his cooking as “urban eclectic” and adds that the restaurant design and menu are reflective of his personality. And while a playful breakfast menu doesn’t scream fine dining, Ferguson says he applies classical techniques to all his breakfast creations. Perhaps the best example of this is the Steak and Eggs, which pairs sous vide–prepared filet mignon with two eggs atop a bed of hash browns and a side of chimichurri.

The chef is already planning where he wants to open his next superhero-themed spot. Always one to dream big, Ferguson thinks Las Vegas, with all its glitz and glamour, would be ideal for his over-the-top breakfast menu.

“I’m not done with this industry until we’re viewed as the best new restaurant in Las Vegas,” he says.

But Ferguson’s culinary career extends beyond the restaurant’s four walls. A few local TV spots led to an appearance on “The Rachael Ray Show,” which then led to contact with none other than Guy Fieri. He’s since become a proven competitor on a number of series, and under the guidance of mentors like Fieri, he’s beat established chefs, like Guarnaschelli, and up-and-comers, including Brooke Williamson, who won season 14 of Bravo’s “Top Chef.”

“That was the greatest moment in my career,” he says. “Since I started competing, I always wondered how my food would do against Brooke’s. Not because I think I’m a better chef than her, but because you have to beat the best to be the best.”

After more than five years of competing on television, Ferguson is much closer to his childhood dream of hosting his own TV show. In fact, he recently filmed a pilot for The Food Network.

As for his childhood superhero, Emeril? Ferguson got to meet him on “The Rachael Ray Show.”

“I had no idea he was going to be there,” he says. “That was one of those really special moments in life.”