Scratch-made ingredients are found throughout the menu at Loring place, including an herb oil and vinaigrette in the Pan-roasted Sea Bass.

His made-in-house approach connects dishes as humble as calzone to those as gourmet as grilled short ribs.

The calzone at Loring Place, a fine-dining restaurant in New York’s buzzy Greenwich Village, may at first seem a bit of an anomaly on the menu. How is a pizza-joint specialty sharing space with more refined items like roasted short ribs with horseradish gremolata? But for those diehards who have followed chef Dan Kluger’s career since his days at Jean-Georges Vongerichten’s ABC Kitchen, or even earlier, at Danny Meyer’s Tabla, this seemingly high-low mix is no surprise.

What makes Kluger such a celebrated and sought-after chef is his reverence for the platonic ideal of an ingredient or a dish. In his capable hands, a calzone isn’t something you make because you have discarded pizza scraps. Instead, it’s a way to highlight his house-made ricotta, the dough made from grains milled at the restaurant, and sausage freshly ground on the premises. This calzone, which New York magazine called “killer,” is a revelation. 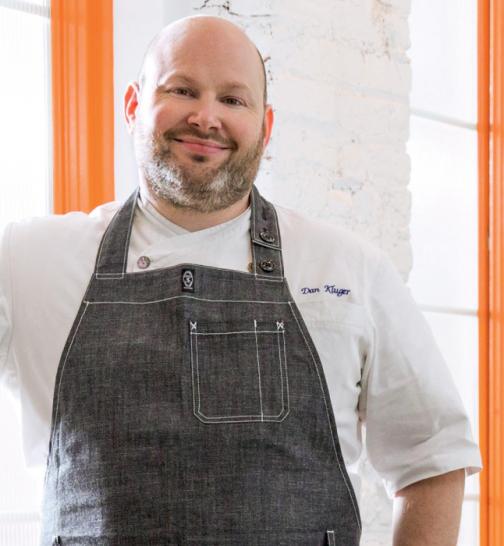 Your kitchen New Year’s resolution: To get home earlier.

In 2020, you’re most excited for: My cookbook and new restaurant.

Your favorite ingredient to cook with right now: Winter squashes.

The chef you’d love to collaborate with: Ignacio Mattos (Uruguayan chef behind Estela in NYC).

Favorite way to destress outside the kitchen: Spending time with my family and home building projects.

Kluger’s love of food began early, although his path to the kitchen was circuitous compared with many chefs. While his mother baked semi-professionally, it wasn’t until a college internship at Union Square Café that he began to see the restaurant industry as a viable career path. Notably, though, he was working front of house. “The goal, I guess, was to own a restaurant at some point,” he says of his aspirations at the time. “I was spending my days off in the kitchen just to understand what goes on, because I couldn’t own a restaurant if I didn’t know.”

Not long after, he was offered a job as a prep cook, which, after some hesitation, he decided to take. “It was total grunt work and it was eye-opening,” he says. “It was a miserable experience in so many ways, but it was great in others.” It was there, peeling carrots and cleaning calamari, that he began to build his cooking foundations. His skills, learned on the job and not at culinary school, did not go unnoticed.

The next few years brought covetable jobs working under chefs like Floyd Cardoz and Tom Colicchio. In 2010, Kluger came to national prominence when farm-to-table stunner ABC Kitchen opened with him leading the charge as executive chef. The restaurant soon became one of the hottest in New York City, clinching a James Beard Foundation award in 2011 for Best New Restaurant and landing Kluger on Food & Wine’s Best New Chef list for 2012. A sister restaurant, ABC Cocina, followed in 2013, and Kluger was nominated for a James Beard award for Best Chef, New York City in 2014.

After so many years of learning from some of the most celebrated chefs in the country, Kluger was ready to finally helm his own kitchen. Loring Place opened in 2016 and was immediately praised for its innovative American cuisine.

The seasonally changing menu is notable for how it highlights a single ingredient in a dish. Small plates include items like roasted beets punched up with ginger and orange, as well as char sashimi served with a spicy sesame-chile oil.

For Kluger, it was equally important to make as many products in-house as possible. “There was this lightbulb moment [early in my career] of, if I stick to my guns and I make my own things, people will appreciate it for what it is,” he says.

Loring Place makes its own hot sauce, yogurt, and butter, in addition to milling grain blends for bespoke flours, which form the bases of its pasta, pizza, and bread doughs. Kluger’s Grandma Style Pan Pizza has quickly become famous; thick, chewy crust is topped with the holy trinity of tomatoes, mozzarella, and basil, with edges caramelized from a bake in a rectangular sheet pan.

The pastas are often loaded with vegetables and are springy and hearty in a way that only house-made varieties can be. Much trial and error went into the specific grain mix for each of these doughs, and Kluger still has to recalibrate if and when a certain strain may not be available from his local vendor. While he’s loath to name a favorite dish on the menu, he does have preferences on his grains. “The Warthog is probably the one we use the most; it’s been the most consistent,” he says of the hard, red winter wheat.

More tinkering with flour and other ingredients is certainly in Kluger’s future. This year will not only welcome a second restaurant—this one in nearby Long Island City—it will also mark the publication of his first cookbook. For home chefs or other cooks looking to create like Kluger, the tome will be an excellent primer.

“It’s really meant to give people the confidence to build a pantry and cook the way we do, which is that balance of sweet, sour, spicy, and salty texture,” he says. “You can take these ingredients that are, at face value, very simple, like broccoli, and then make them complex because you made a great sauce or charred it on the grill.”

The new, yet-unnamed restaurant will espouse a similar ethos to the book and Loring Place but with a more relaxed attitude. In short, it’ll be seasonal, market-driven American but more approachable than the original restaurant.

“Right now, I’m trying to figure out how to really balance everything and make it flexible enough to suit everybody’s needs,” he says. It’s a challenge for which Kluger is ready. After all, creating a new recipe and tweaking existing ones are all part of the process. “I enjoy that because I think that’s part of what cooking is to me. It’s that tactile, you-have-to-actually-get-involved kind of thing,” he adds.