At Blackberry Farm, the menu changes with the seasons, showcasing fresh produce straight from the garden.

The Chef Behind Award-Winning Blackberry Farm

Cassidee Dabney’s first exposure to Blackberry Farm came from an unlikely source: her mother. “I was working at the Four Seasons in Jackson Hole, Wyoming, and my mom snail-mailed me a clipping [of the resort] with a Post-it that said, ‘This is a one-day drive from us instead of two,” says Dabney, who had been hoping to return to the South.

Her parents generously paid for her flight to do the stage on property, and in 2004 she became a full-fledged member of the team. After a brief hiatus to help her family, Dabney returned to the Walland, Tennessee, resort in 2010 and is now its executive chef, overseeing one of the most lauded hotel culinary programs in the country. 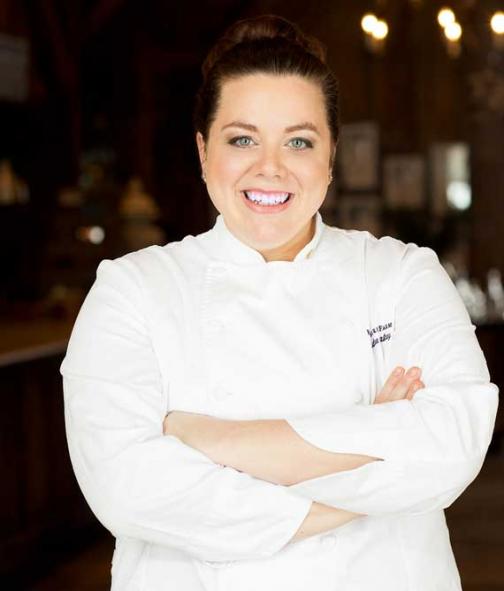 Dabney comes by her love of food—particularly local fare—honestly. “My dad’s a big hunter and my mom’s into gardening, so there was always a really big connection to food,” she says. “I had that respect, which some people might not, as to where things come from and the processes it takes to get that food on the plate.”

But it wasn’t until college at the University of Arkansas that Dabney realized cooking was her passion. “I had a job as a line cook at an Applebee’s to make extra cash, and I found myself picking up shifts and skipping class,” she says. “It was the culture of the kitchen that really got me excited about cooking. It was people from all walks of life, getting together and working together.”

Dabney soon enrolled at the New England Culinary Institute, and jobs in Germany, Hawaii, and Boston, among others, soon followed. But for Dabney, who grew up in a slew of Southern states including Tennessee, Virginia, Georgia, and Arkansas, cooking at Blackberry’s Tennessee grounds was a homecoming. For a chef who is both classically trained and fluent in cooking seasonally, there may be no better kitchen in the country.

And it’s not an exaggeration: Ever since 2013, when Bon Appetit crowned the resort the No. 1 Food Lover’s Hotel in America, a steady stream of culinary devotees has made the trek to this 4,200-acre spread in the foothills of the Smoky Mountains. Under the Relais & Châteaux umbrella of independently owned hotels, Blackberry Farm pampers its guests on many levels—from oversized, lush suites to on-site fly fishing—but nothing may be more celebrated than its cuisine.

The meals, which are included in the room rate, should be tackled like a marathon, not a sprint. Breakfast starts with Southern specialties like griddle cakes served with spiced maple syrup and pecan butter, eaten al fresco with a view of the property’s tranquil lake. Lunch, presumably after guests have worked up an appetite horseback riding or shooting sporting clays, might be a crisp salad alongside the hotel’s own Brebis cheese served with beets and horseradish.

While these meals undoubtedly showcase the best the South has to offer, nothing quite compares to the elegance and sheer volume of dinner, which is generally served inside the hotel’s majestic, turn-of-the-century barn. Dabney and her team pull out all the stops in a menu that can run up to seven courses and feature everything from wood-grilled flank steak with pickled ramps to Benton’s country ham served with smoked mushroom oil.

Part of what makes Blackberry Farm so celebrated, of course, is its farm. Under the guidance of master gardener John Coykendall, the hotel grows or harvests everything from sour cherries to sumac to ramps. While having access to such a bounty is certainly a plus for the kitchen, it compels Dabney and her staff to switch up menus almost daily. “The creative process is really driven by the farm,” she says. “You have to be so flexible. If you pick a tomato after a big rain, it’s not going to be as acidic, for example. You have to create the food based on what the ingredients are saying.”

Nearly a decade at Blackberry Farm has sharpened Dabney’s understanding of the various growing seasons to the point that she can anticipate when certain ingredients will be abundant and adjust the menus accordingly. Daily visits to the garden, as well as an availability list that the farm sends to the kitchen a few times a week, help keep the whole property in sync.

The James Beard Award–nominated chef also benefits from Coykendall’s legendary heirloom seed-saving program. “Sometimes he’ll get in super weird stuff,” she says with a laugh. “Recently they grew a bunch of jelly melons. We came up with a ferment that’s a really fun acidic flavor, and we’ve been using it as almost like a vinegar or verjus.”

Pickling and jam-making are certainly part of Dabney’s repertoire. She’s now in the process of building the restaurant’s larder, although she hasn’t yet identified the best storage area. “We’re always finding places to hoard stuff; we have a number of secret hiding places,” she says. “I feel like we’re squirrels and  that we might forget one day where we put something. Maybe a couple of years later, we’ll find it and be like, ‘Oh, that’s where we put the pickled insert-whatever-it-is.”