Dilsa Lugo’s restaurant Los Cilantros is one of many businesses born out of the La Cocina incubator program over the past 16 years.

In April, the nonprofit debuted the first women-led food hall in the U.S.

It’s been 16 years since La Cocina began its mission to help low-income entrepreneurs, especially immigrant women and women of color, pursue their foodservice dreams. Since then the small business incubator has helped more than a hundred people launch their own ventures by providing technical assistance, affordable kitchen space, financial and regulatory guidance, and other forms of support.

In April, the nonprofit debuted the first women-led food hall in the U.S. Located in San Francisco’s Tenderloin neighborhood, La Cocina Municipal Marketplace currently houses half a dozen concepts, each created by a program alum. Dilsa Lugo is one such proprietor. Lugo, who immigrated from Mexico, worked at such venerated restaurants as A16, Chez Panisse, and Copita before opening her own restaurant, Los Cilantros, in 2014. Los Cilantros now has an outpost in the new marketplace. As both a graduate of La Cocina and a current board member, Lugo understands better than most the difficulty immigrants and minorities face in becoming restaurant owners—and the importance of organizations like La Cocina. 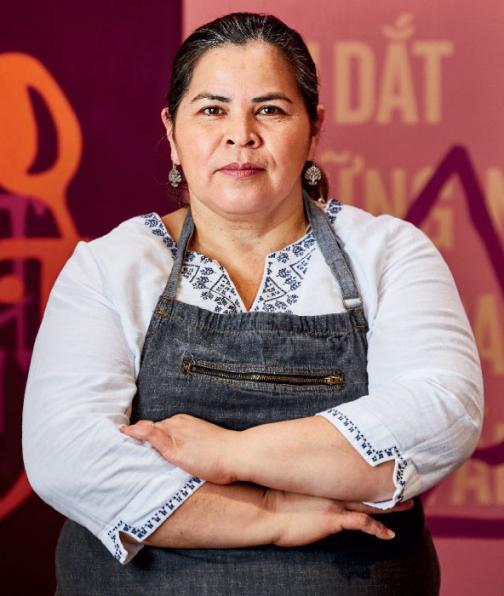 How did you first become involved with La Cocina?

I started at La Cocina in 2007. I was taking some cooking classes and I met [executive director] Caleb Zigas who came to talk about La Cocina. I told him that I wanted to open a Mexican restaurant, and he was really helpful and excited by the idea. I knew how to cook because I had cooked with my mom all the time, but La Cocina guided me in how to be a businesswoman, how to move from cooking informally to thinking about how to grow. That’s what I realized later on: that most of us in the program are first and foremost cooks. We know how to cook. We know the flavors. We know the recipes. But the jump from cook to restaurant owner is one that requires a different set of skills that I learned in being a part of La Cocina. It makes things easier when you have a community full of resources to guide and help you.

Tell us about your restaurant, Los Cilantros.

I opened my Berkeley restaurant in 2014. It’s always been a family-owned business where we make almost everything in house. I really like to use the fresh California produce and different corn varieties to make unique and authentic dishes that I grew up eating in Mexico. While tacos are amazing, I think there are so many other great dishes that I want to bring to people who want to try something different.

We have tlacoyitos; it’s kind of our gordita but made with blue corn masa and filled with requesón and epazote. It’s a dish that people sell in Mexico market halls; it’s delicious and really simple. But when we first put them on the menu, it was really hard because nobody knew what it was. It took a little educating of guests but once they tried the tlacoyitos, they became very popular.

Had you always planned to grow your business beyond a single restaurant?

When I started my business, I was taking every opportunity that came my way to grow it. When the opportunity came to do catering, I took it. And then there was an opportunity to work in a commercial kitchen in Sausalito, and I took it. It has been nonstop since I opened Los Cilantros in Berkeley. I remember I told my husband I was going to take time off but then three months later, this opportunity to open at La Cocina’s marketplace in San Francisco came, and I took it.

It was never the plan, but things just happen and life has been really kind to me, sending me all these opportunities to grow my business. But after many years and experiences, I’m thinking and planning differently now as a business owner. I’ll have to think about opening another one, if I get the opportunity.

La Cocina Marketplace opened in April. What has it been like so far?

I’m so excited. It’s a beautiful place and a beautiful community. All the business owners are women, and we all lean on one another for resources and advice. We’re all working hard because we’re in an industry that has been hardest-hit by the pandemic. We’re there with the food ready, but it’s been a slow start with the public health restrictions to keep everyone safe. As San Francisco opens up more, we’re getting ready because I’m sure that it’s going to be very busy.

Two of us already have another location. So I try to help [the new owners] when they need advice or even just talk to people that have restaurants because we have the same issues. I like telling them that we’re all living the same dream, but sometimes it feels like a nightmare. And it’s really nice just to hear each other.

Do you see La Cocina reaching even more immigrants and women of color?

I think it’s growing because it’s a very successful program. The organization makes a real impact and is doing so many great things. People trust La Cocina and want to help the organization grow so it can help more low-income women and immigrant entrepreneurs. There are many women, people of color, and immigrant business owners who want to grow their business and make their dreams real. We know our craft, but we need opportunities, resources, doors opened, and someone to believe in us.

For me to have people like the La Cocina staff has been a huge help. Owning a business is hard work, but it’s even more challenging if you are from a different country and speak a different language. La Cocina helps break down those barriers and change lives, not only the lives of the business owners but also our employees and our families, both in the U.S. and back in our home countries.