Why Huddle House is Only Getting Better with Age

From a new advertising strategy to a shift in growth, the 55-year-old chain is hitting high gear.
September 2018 Danny Klein

In February, Huddle House changed hands for the second time in six years. Private-equity firm Sentinel Capital Partners dealt the 55-year-old chain to Elysium Management for an undisclosed sum. In that span, the family-dining icon retracted its total unit count by 44 units to 349 locations generating more than $240 million in annual systemwide sales. However, the brand’s average-unit volume increased 14 percent during that run. It also put together its most impressive growth spurt in 15 years in fiscal 2017, signing 36 new franchise agreements and entering new markets across 14 states.

There was another major strategic shift taking place during the due diligence process as well. Huddle House CEO Michael Abt, who joined the brand in 2012 after serving as senior vice president with Arby’s, overseeing 1,100 company restaurants, pitched Elysium on what he calls a “tremendous opportunity” for the chain. In the next five years, Abt says Huddle House plans to expand its company restaurant portfolio from 40 to 100 restaurants.

“I think what you will experience and see in the franchising industry is that there’s so many franchise offerings right now,” Abt says. “It is becoming more and more difficult to grow just through franchising. So our idea was we need to create a bifurcated growth strategy that can help accelerate unit growth in the system and provide more money to the ad fund to help increase awareness through marketing. The best way to do that in our estimation, where we can control our own destiny to some degree, is to go out and build company restaurants.”

Huddle House identified whitespace in its existing footprint to build these corporate units without infringing on its expanding franchise base, where there are currently 51 stores in development, Abt says. The aim is to build 12 or so company stores per year alongside the franchise expansion, for the next five fiscal calendars.

To get there, Huddle House needed to bolster its infrastructure, which Elysium was open to. The added capital allowed the brand to bring on an accountant, real estate director, construction manager, and contract administrator. Abt says another four or five positions could be added, including field personnel and trainers, to help Huddle House execute this strategy.

Positive returns and the strength of today’s sale-leaseback market are driving the strategy, but so is the health of Huddle House’s system overall. In many cases, Abt says, positive same-store sales can be a reflection of lapping a rough year, especially at a legacy brand. Huddle House, though, has stacked several good years on top of each other lately. This past year, the brand saw its comp sales lift 2.5 percent and average-unit volume grow more than 7 percent. Additionally, 69 percent of the system is upgraded to the new Evolution design—a model that’s significantly outperforming older boxes by an average of 31.3 percent. According to Huddle House’s franchise disclosure document, the top half of all Evolution design restaurants posted average annualized unit volumes of $1,002,796. 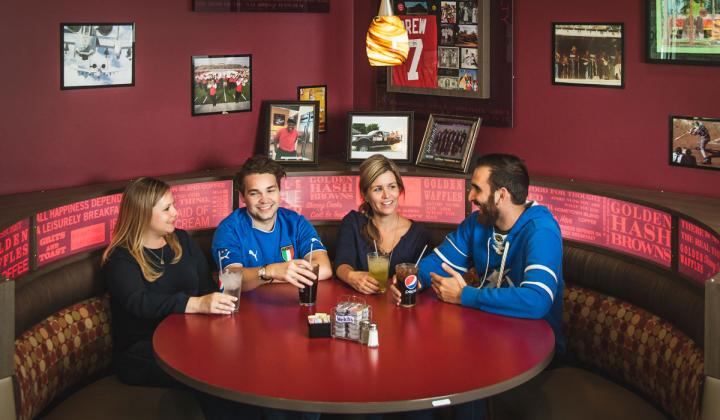 Evolution restaurants are outperforming older boxes by an average of 31.3 percent. 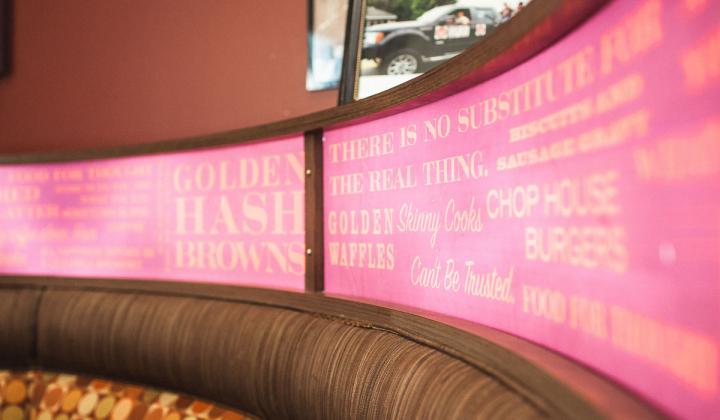 Huddle House's Evolution design was only 6 percent implemented when CEO Michael Abt joined the brand in 2012. 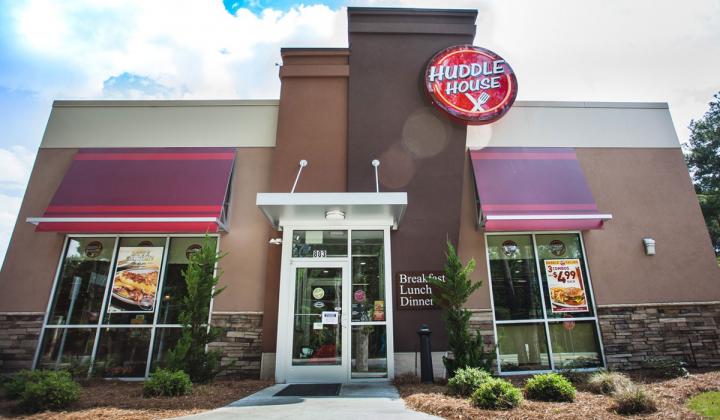 Huddle House expects to have 73 percent of its system updated to its Evolution design by year's end.

Abt believes customer trends are pointing to further momentum, too. Breakfast remains one of the fastest growing dayparts in foodservice. In 2017, Dataessential showed that 93 percent of more than 300 operators surveyed reported an increase in breakfast sales. The year before, the National Restaurant Association’s Restaurant Industry Forecast noted that 72 percent of adults wanted restaurants to serve all-day breakfast.

At Huddle house, roughly 70 percent of its sales come from breakfast items offered at all times of the day. Abt says breakfast incidents are forecasted to increase by 4 percent over the year few years.

Another sign of optimism: Huddle House’s latest fleet of restaurants are posting sales 35 percent higher than the system average. And the brand’s market penetration remains steady. Huddle House serves smaller, often waved-over markets that embrace the concept as a multi-occasion operation. The average populations in the towns Huddle House opens are 6,000.

This reality has guided Huddle House’s changing marketing direction. About two and half years ago, the brand had zero percent of its ad fund supporting digital. It also featured occasional billboards in franchised markets, but no overarching directive.

Now, digital is about 10 percent and billboards account for 15 percent of Huddle House’s media mix. Abt says digital promotions are growing transactions 2 percent versus the non-digital promoted restaurants. The company brought on agency Plein Air last year to fuel the growth.

The development of an aggressive outdoor program has led to between 100–120 billboards in Huddle House’s markets. “We’re local,” Abt says. “A couple of billboards go a long way.”

The challenge, Abt says, is how to grow the marketing business and digital investment without sapping money from other segments. Print remains a key local driver. Huddle House will layer billboard on print, digital on billboard, and so on, but is currently not looking to increase its ad fund to franchisees.

“So this is sort of the necessary evil of marketing in most businesses,” Abt says. “You have to find ways to spend more money on marketing so you don’t lose ground on those initiatives that were working in the past.”

What Huddle House did was adopt a systemwide billboard program a couple of years back where the chain pays for most of the billboards, and if the franchise partner is willing to pay for half of the cost, Huddle House will extend it, and place the board for an entire year. So instead of operators getting six months on Huddle House’s dime, they can offer up another half and the company will find ways to split the cost to get them covered for an entire year.

Operators are eager to link up given the results. Abt says billboards are extremely effective at promoting new offerings in rural markets. One example was the January launch of Two-Hand Sandwiches, like the Prime Rib Tips Sandwich, which Huddle House introduced on the front of billboards. The same was true with its May 2017 Sweet Cakes. The “Pancakes Perfected” are thick and fluffy platter-sized pancakes in flavors such as Oreo Cookie Crunch and Caramel Apple Cobbler. 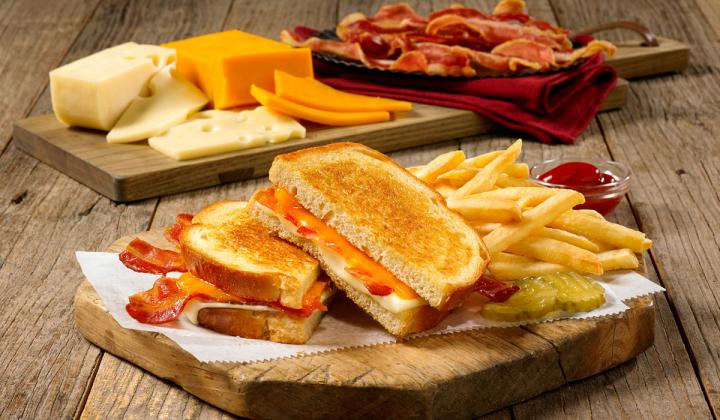 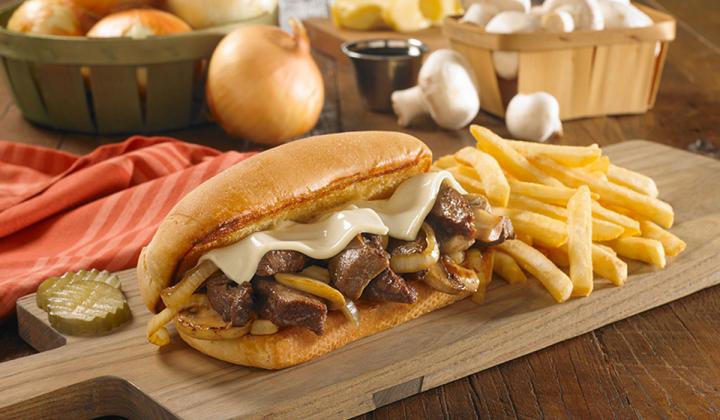 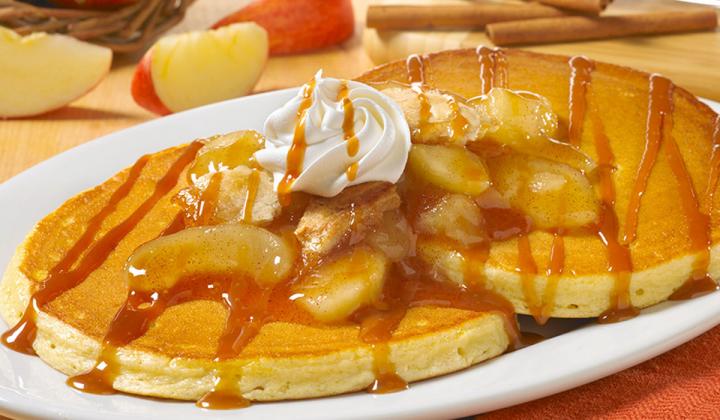 Another reason this is critical for Huddle House is the fact that its late-night business is shrinking a bit. About 70 percent of the chain’s units are 24-hour operations. “What we have seen in our markets is that the late-night business is slowing declining,” Abt says. “In these smaller markets that we’re in, where you used to have a lot of clubs and bars, some of those bars and clubs are just kind of going away. And with that goes some of the nighttime business.” Huddle House, in other terms, is finding a sweet spot in marketing its menu promotions and LTOs, breakfast, and other dayparts through out-of-home advertising.

As for the Evolution design, Huddle House’s program covers new prototypes as well as remodels. It has remodeled almost half of its system in the last five-and-half years. When Abt started with the company, only 6 percent of Huddle House’s footprint reflected the updated look. By year’s end, he expects Huddle House to hit 73 percent.

Bright colors, contemporary wall finishes that reflect actual products on the menu, and production enhancements are the focal points. One addition is the heated pass throughs, which improve throughput and also keep the product warmer while waiting for servers to pick it up. A signature tower on the exterior and a refreshed logo is also reflecting a more modern image.

“When you combine not just the evolution building independently, but when you combine that with the product innovation that we’ve had, it’s really helping to provide a new elevated experience for a brand that’s 55 years old,” Abt says. The remodels are producing same-store sales lifts of 10 percent with a 31.3 percent increase in AUV versus non-Evolution image buildings.

Huddle House is offering cash back to operators when they complete the model as incentive, which also makes them “feel like we’re putting a little skin in the game,” Abt says. “But when they have one first-year same-store sales average growth of greater than 10 percent they like the results obviously. The consumers are telling us with their pocketbooks that they approve,” he says.

In regards to future growth, Huddle House is very focused on conversions where the return can be even greater. “We can turn anything into a Huddle House almost,” Abt says.

There is also a unique background for off-premises, given the small markets. In many of Huddle House’s restaurants, third-party delivery is simply not a logistical option. So the idea of implementing a systemwide delivery program is something that doesn’t currently fit. But what Huddle House has done is implement an online ordering platform, which has helped increased carryout business by about 4 percent, Abt says.

Regardless of how and where Huddle House innovates, creating a standout product in the booming breakfast space remains top of mind. “We just didn’t want to be another me too stack of pancakes,” he says, referencing the Sweet Cakes. “We feel like we can differentiate there a little bit. And if we keep doing that, from a product standpoint, we can drive top line and transactions.”