Why Cheddar’s Could Be Darden's Sleeping Giant

The casual brand is quickly catching up. Once it does, growth could be up next.
April 2019 Danny Klein

Bringing Cheddar’s Scratch Kitchen up to speed has been quite a journey for Darden. Yet despite the challenges and quarter-to-quarter drag on top-line sales, CEO Gene Lee said the company is more excited today than when they first bought the family-dining brand for $780 million in April 2017. The restaurant-level economics were attractive then, with average-unit volumes of $4.4 million and average restaurant guest counts of roughly 6,300 per week, along with an average check of $13.50.

Cheddar’s was also coming off just being named America’s favorite chain by Market Force Information, unseating Cracker Barrel. Perhaps more intriguing, though, from Darden’s lofty perch at least, was the fact Cheddar’s had just 165 units and “considerable runway for growth,” Lee said at the time.

But the process has been, unsurprisingly, complicated. However, Lee said during Darden’s third-quarter review in late March there remains “huge opportunity in the marketplace” to grow Cheddar’s, which now has 159 restaurants. Typically, Darden doesn’t scale brands at more than 10 percent unit growth. More than that stresses the company’s human resources and doing so is a burden it isn’t willing to shoulder.

As for why Darden’s optimism in Cheddar’s is surging, it comes down to the biggest gap they’ve had to cross post acquisition. And it goes beyond numbers. “The more we understand the consumer and resiliency of the consumer, we get excited about the opportunity to grow this,” Lee said. Darden really couldn’t understand Cheddar’s until it got in the trenches with the brand. And what it’s discovering is that Cheddar’s average guest isn’t all that different from one Darden knows rather well: Olive Garden.

Cheddar’s same-store sales declined 2.7 percent in the third quarter that ended February 24. The brand has tracked red since Darden started sharing figures after the deal:

Before exploring the Olive Garden note further, it’s worth pointing out the bevy of issues Darden faced early on. Dealing with Cheddar’s 25 franchised units was arguably A1 on the list. Darden had to work in the chain’s two largest franchisees when it made the deal, and weakened Cheddar’s base restaurants in doing so. It pulled resources from those units to help staff acquired ones. 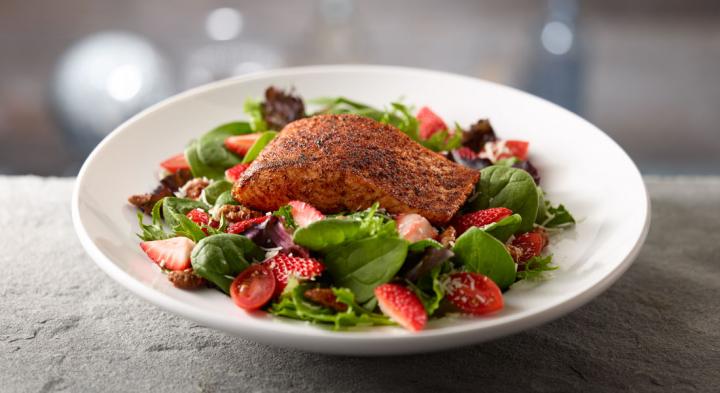 Cheddar's Scratch Kitchen
For the first time, Cheddar’s manager and training pipeline is now on par with its other brands, the company said.

As Darden pushed the integration process forward, Lee said, Cheddar’s lost focus on basic operating fundamentals. In response, Darden suspended marketing and promotional activities even though it was rolling over a heavy period of incentives the year prior to, and immediately after, Darden closed the acquisition. That kind of decision is probably one a smaller restaurant group doesn’t make. But Darden’s overall performance is steady enough to play the long-term game when others are moving checkers pieces around the board.

Cheddar’s units weren’t fully staffed. Scheduling was a mess. These are major concerns for any chain, but definitely for a company that hangs its hat on adding labor instead of pulling it out when complications arise. Lee once said brands that can “hire, train, and retain frontline employees to bring their brands to life are going to win.” He added, “the dynamics inside the industry are changing dramatically. And I think that's where we're focused and that's where I think the winners will be focused—on how do they continue to invest in their team members and how to ensure you're properly staffed to execute against this increased demand.”

So this was an issue gnawing at Darden’s management since it was such a departure from the norm.

They’ve come a long way. For the first time, Lee said, Cheddar’s manager and training pipeline is now on par with its other brands (Olive Garden, LongHorn, Seasons 52, Yard House, Bahama Breeze, Eddie V’s, and The Capital Grill). This addresses another serious setback in the integration process: turnover. Lee said nearly 100 percent of Cheddar’s units finally have a general manager or managing partner. Previously, the brand didn’t even have a certified trainer program. The basic goal of having every hired employee go through a solid platform wasn’t there.

Cheddar’s now has reporting tools that include discount forecasting and food-waste management. They’re focusing on staffing levels, including making sure managers are present in the kitchen, lobby, and dining room during peak periods, Lee said.

And it’s paying off with customers.

Last quarter, also for the first time, Cheddar’s boosted its guest satisfaction scores. “We're seeing significant improvement on Friday and Saturday night now that we have managers positioned in the right place. Our throughput is up significantly,” Lee said. “We're closing the gap on same-restaurant sales on those nights.”

To that point in December, guest satisfaction scores rose six straight months and were at the highest they’ve been since Darden acquired Cheddar’s.

As much as this labor issue was a learning curve for Cheddar’s, it was for Darden, too. Lee said they’ve spent a lot of time picking who should be the managing partners of these restaurants. And that took familiarity. “As we continue to learn the people, learn their capabilities, our teams will start making better decisions on who they decide to leave the unit with,” Lee said. Deciding who should run individual restaurants has had the biggest impact on Cheddar’s overall success.

This was true at the top as well.

John Wilkerson was named president of Cheddar’s in July. He’s been in the Darden system for 25 years, most recently serving as president of Bahama Breeze. He began as an hourly crew member at Red Lobster before entering Darden’s manager in training program and eventually being promoted to GM.

This switch took place after then-Cheddar’s president Ian Baines stepped aside. Baines was Cheddar’s CEO before Darden’s acquisition of the brand, and the former CEO and president of Smokey Bones—a concept Darden sold in 2010. He also worked at Brinker International and held the CEO post at Uno Restaurant Holdings in 2013. Baines was with Cheddar’s since 2014.

This staffing process needed to undergo some healthy attrition. Lee said some of Cheddar’s management was tethered to the old guard. “They had worked with them before and when you make those changes, folks leave,” he said. The result—Cheddar’s struggled with expectations at the team member and management level early on. As the company came in and started implementing its structure and processes, expectations rose. And that wasn’t going to fit with every past employee.

Cheddar’s also has had to learn how to use the tech and tools Darden typically leverages.

At Olive Garden, for example, Darden uses scale to underprice the competition while devising productivity enhancements on the operations side to offset inflation. That simply wasn’t feasible at Cheddar’s, and it’s been dragging results.

But that’s changing, Lee said, and Darden still has some levers to pull with Cheddar’s. More productivity enhancements, but also mobile ordering, which Cheddar’s has not implemented. “And we will turn those kind of things on and those big sales-building initiatives on when we feel it's the right time,” CFO Rick Cardenas said on the call. “We've got the team in place. They are trained and they're ready to execute flawlessly. We don't like to do anything until we are ready to execute perfectly. And we've got a little bit of ways to go before we get there.” 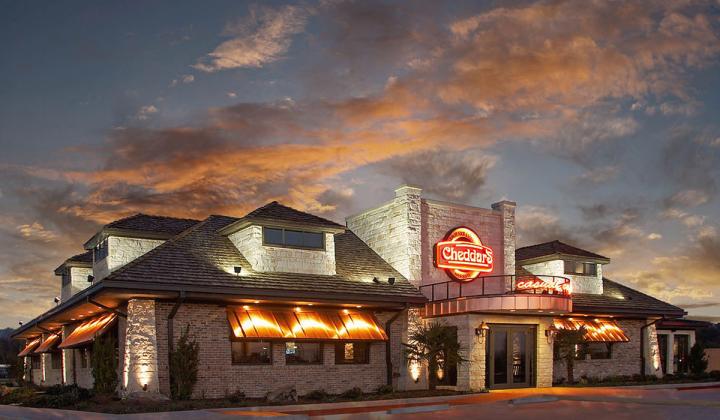 The chain rebranded to Cheddar's Scratch Kitchen from Cheddar's Casual Cafe in 2016.

Cheddar’s reported negative guest counts recently although productivity is improving. Typically those two arrows point in the same direction, for better or worse. This is a sign Darden is rebuilding Cheddar’s from the ground up instead of trying to pulse incentives so it can generate sales in the short-term. That day will come when the brand is ready, Cardenas said.

Darden hasn’t even tested some of these sales-driving levers with Cheddar’s, let alone appreciate them. The reason being the company is still focused on simplifying operations and improving the core menu. Last quarter, Darden said Cheddar’s was working on culinary process improvements that would be phased in over time—all intended to boost quality, consistency, and speed of service. Not all that unlike the efforts taking hold at LongHorn as it cuts back menu size in favor of execution.

Returning to the Olive Garden note, Cheddar’s guest is really pretty similar, the company said. So Darden can learn from the 860-unit brand’s successes to decide how and when to move the needle on certain tools, like off-premises. Olive Garden and Cheddar’s are both value-based brands that drive results from loyalty and consumer preference. They skew abundant and consistent on the value side.

With Olive Garden over the past year or so, Darden cut back incentives and focused on everyday platforms, like Cucina Mia!, Lunch Duos, Early Dinner Duos, and a recent Giant Italian Classics menu. It created a menu platform guests could use for all occasions—a promotional construct they can count on and upgrade within. Not one they forget until the latest deal hits. Can Darden do the same with Cheddar’s? There’s no reason to think otherwise.

It’s always worth remembering as well that Darden tends to take its time with integrations of fresh brands. For LongHorn, which Darden bought in 2007 when it purchased RARE Hospitality International Inc. for about $1.2 billion plus debt (The Capital Grille was also in RARE’s portfolio), it dragged through a year of negative comp sales. It never did again. The steakhouse just generated its 24th consecutive quarter of same-store sales growth. Lee said Yard House also took a couple of years to get its labor figured out.