A look at the footfall traffic of some top casual brands reveals an interesting picture.
October 2018 Danny Klein

Often when publicly traded brands report quarterly results, the performance is relative to their own success or troubles. Same-store sales, traffic—these indicators measure year-over-year progress or declines, and stack over fiscal calendars to paint a picture of a chain’s financial health. But it can be difficult, in a lot of ways, to really measure competitors against one another.

Cuebiq, a location intelligence company, took on the task by measuring footfall traffic over the last three months, among other indicators. Across two groups, here were some of the findings:

READ MORE: Chili’s gets its mojo back.

The first comparison included Chili’s, Applebee’s, Olive Garden, Outback Steakhouse, and Red Lobster. Which brand was America’s most frequented chain, according to the data? Chili’s.

From June 3 to August 25, more than 26 percent of the people visited the Brinker International flagship.

From a unit count perspective, it’s worth noting how these brands compare before diving deeper.

Broken down, Olive Garden and Chili’s were most popular with the lunch crowd. Olive Garden saw 33 percent of its footfall traffic between 11 a.m. and 2 p.m., while Chili’s witnessed 32 percent during that time. Outback and Red Lobster were tops for dinner, with 57 and 51 percent of their footfall traffic arriving between 5 and 8 p.m., respectively.

Cuebiq also measured loyalty by seeing which diners visit similar chains. Chili’s topped that list, too, with 68 percent of its customers not visiting any of the other chains surveyed. Applebee’s enjoyed a 65 percent clip. Red Lobster was bottom of the pack at 42 percent.

Arguably one of the most intriguing notes here is the daypart split. Chili’s in particular has made a big push in recent quarters into the lunch business. Last January, when Chili’s was in the heart of its turnaround plan, CEO Wyman Roberts said the brand was taking aim at the segment through new food and operational enhancements, looking to “deliver more compelling value for lunch guests, which we are implementing starting this quarter and supporting with national marketing efforts,” he said.

At the time, Roberts said lunch was lagging behind due to the brand’s new menu, which trimmed some 40 percent of options to cut down on operational complexity and help Chili’s focus on the core draws. In response, Chili’s said it would address lunch through campaign-driven models. “The beauty of Chili's is that the difference between price points on the menu, at lunch and dinner, are not that dramatic,” Roberts said, adding that alcohol shifts the check average at dinner, not food. “We also know that most people have a lunch restaurant and they have a dinner restaurant and their lunch restaurant tends to be closer to their work and their dinner is closer to home which makes all the sense in the world. So you're not trading out occasions as easily as I think it might appear on the surface.” The menu targets—better food, speed, and consistency—also line up with lunch guests, he added.

It appears many of those changes are hitting their mark.

Overall, Chili’s has accelerated its results in recent quarters. Three quarters into its turnaround plans, the brand reported its best performance in more than three years this past August. The brand achieved same-store sales gains of 0.6 percent and positive comp traffic of 0.8 percent in the fourth quarter. For the full year, Chili's saw its comps decline 1.1 percent compared to a 2.3 percent drop in 2017.

The traffic flip is even more prominent (at company stores):

Chili’s also credited much of its traffic to investments in loyalty. This past quarter, Chili’s actively promoted its My Chili’s Rewards Program, which became its focus after the brand bailed on American Express Co.’s Plenti Rewards program last quarter. Customer feedback showed the program was too complex. Chili’s rerouted to My Chili’s Rewards and also abandoned a points-based system. Electing instead to focus on growing its database. Roberts said Chili’s grew “our already sustainable database by more than 25 percent,” in the quarter. 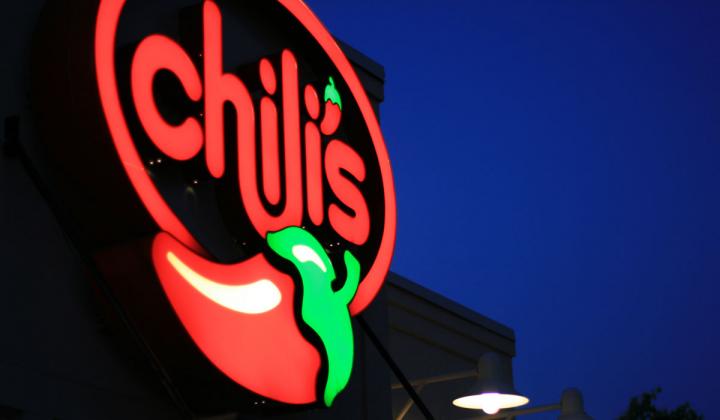 Chili's has made significant improvements thanks to a slimmed-down menu.

Here were the findings:

Customer loyalty (guests who don’t eat at the other chains in the list):

In this case, it’s Texas Roadhouse that takes the “most frequented chain” title.

Texas Roadhouse is, and has been for some time, one of the most consistent chains in casual dining, from a sales and performance angle. It reported same-store sales gains of 5.7 percent at company-run units and 3.9 percent at domestic franchised stores (70 of the restaurants are U.S. franchises) in the second quarter. Traffic lifted 4.3 percent. On a two-year stack, the 5.7 percent hike built off last year’s 4 percent increase, giving Texas Roadhouse an impressive nearly 10 percent comps story to tell.

Red Robin was the biggest gainer, up an impressive 8 percent to 79.

The picture isn’t entirely rosy for Texas Roadhouse, although it depends really on how you look at it. The chain has fought rising labor costs in recent periods. Restaurant margin fell 76 basis points, year-over-year, to 18.7 percent of sales thanks to higher labor costs, in Q2. Labor as a percentage of total sales upped 93 basis points to 32 percent and labor dollars per store week were up 7.5 percent compared to the prior-year period. The culprits: wage and other inflation of about 4.3 percent, as well as Texas Roadhouse’s decision to increase managing partner base pay and growth in hours of about 3.2 percent.

However, this is an issue Texas Roadhouse understood was coming. The reason being that it looks at “providing a legendary experience,” according to president Scott Colosi, as the key to long-term growth, not cutbacks. And doing so demands a heavy investment in staffing.

“We found that our stores that have over a certain level of servers on the high-end have stronger comps than those that have an amount of servers on the low-end, which have lesser comps,” CEO Kent Taylor once said. “So that basically tells you that when you’re properly staffed life looks a little better.”

CEO Denny Marie Post said many of the issues were self-inflicted. Mainly, the fact that 75 percent of its loss in dine-in traffic came from peak hours. “What’s really startling is our walkaways increased, what 850 basis points, or up about 85 percent, year-over-year,” Post said. “… In this day and age we just can't afford to have any guests walk back out of the building.”

Red Robin’s total ticket times out of the kitchen increased about a minute on average. The burger chain credited growing complexity in the business, thanks in large part to off-premises and the evolving host role. Red Robin is actively addressing these concerns, Post added, including revamping its Tavern burger lineup to improve per person average by adding new options less frequently and mixing up pricing. “The bottom line is much better service execution with improved promotional balance,” Post said. “We are confident we have identified the key issues that led to the misses and are putting solutions in place to improve through year-end. Now it is up to our entire team, home office, and building to deliver.”

Cracker Barrel, meanwhile, saw its same-store sales declines 0.4 percent in the fourth quarter, year-over-year, with average check up 3.1 percent. But a guest traffic drop of 3.5 percent spoke to a larger worry for the 660-unit brand. For the fiscal 2018 calendar, traffic fell 1.9 percent (comps increased 0.6 percent). "I'm concerned with our traffic trends, and over the past few months, our team has been rigorously analyzing the underlying factors of our underperformance," CEO Sandy Cochran said during a September 18 conference call.

Here’s how the traffic has trended:

Underperformance of its Campfire Menu and a faltering value positioning aided the swing. Like Red Robin, Cochran said Cracker Barrel was proactively fixing the issues.

“We've been reevaluating the touch points we have with our guests in order to execute more consistently, particularly at dinner, which has been the most challenged of our dayparts,” she said. Read more about Cracker Barrel’s efforts to turnaround sales and traffic here.