Twin Peaks' menu innovation has been a category differentiator.

What Does the Future Hold for Hooters and Twin Peaks?

And the once-booming category in general.

Historically, chains like Hooters and Twin Peaks, and their scantily clad waitresses, established a niche audience, of mostly men, in the sports-bar restaurant space. But industry consultants suggest that although they’re holding their own, times have changed, and they need to adapt in order to keep pace.

Showing how challenging the category can be, the Arc Group, which owns Dick’s Wings, acquired 34-unit Tilted Kilt in November of 2018 for $10. That price was low based on Tilted Kilt’s $1.8 million burden of debt and $1.5 million in additional payments due.

Today, standing out means bucking the tide against sexism, updating menus beyond chicken wings, and appealing to more than men in search of sporting events.

Hooters and Twin Peaks have had disparate results in terms of revenue. In a ranking of revenue at the top 500 U.S. restaurants, Hooter’s, the largest of the two with more than 300 locations, saw its revenue fall 1.7 percent in 2018, while Twin Peaks’ 83 locations spiked 7.3 percent. What is Twin Peaks getting right, and what does Hooters need to do bounce back?

Darren Tristano, CEO of Foodservice Results, an Oak Park, Illinois-based food industry research firm, says these chains are still thriving, but they need to make improvements to catch up with “casual dining bar and grills that have contemporized.” He says competitors have enhanced food quality, and now offer local craft beer, as well as improved wine and spirits selections.

Consumers still frequent Hooters, Tristano says, for their “inexpensive and affordable food and that remains a value play.” But millennials are seeking “independent burger bars where they can watch sports and enjoy food and be in the company of each other,” he says.

Twin Peaks has done a solid job of enhancing its menu options. Many of the Twin Peaks locations have outdoor spaces, large settings with ample square footage, and its “food and ice-cold beers are differentiators compared to Hooters,” Tristano says.

These restaurants with sultry waitresses attract 65 percent or higher percentages of men, and that means they’re having a tougher time wooing women and families, Tristano says. He suggests hiring more male servers, which could appeal to a more varied clientele. 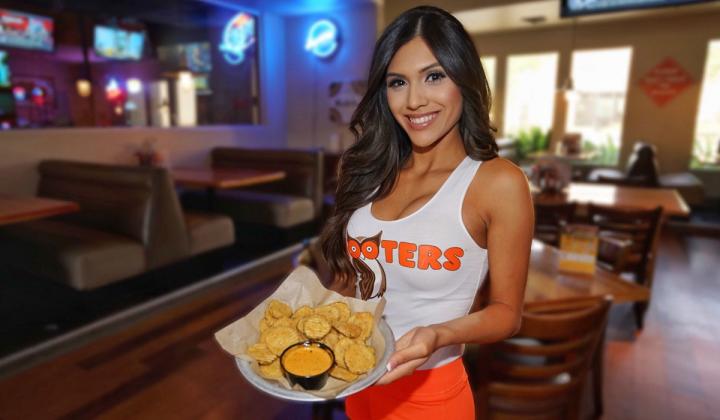 Hooters has seen a jump in delivery sales over the last year.

Yet it’s not just restaurant chains in this specific category that are feeling the pinch. So are a host of casual-dining bar and grills, says Roger Lipton, president of Lipton Financial Services, which specializes in the restaurant industry. “It’s a very competitive space, and they’re all battling for market share,” he says.

The alluring waitresses create a mixed message, Lipton says. Some men want to ogle them, but “some guys won’t bring their wives or kids. You lose some customers who are offended,” he says.

Since Hooters was acquired by two private equity firms, Nord Bay Capital and TriArtisan Capital Advisors in January 2019, Tristano expects they will focus on “improving the balance sheet first, and when they’ve made some success at the unit level, they’ll look to invest money for renovation.” Each renovated location usually spikes revenue by 10–15 percent the next year, he adds. Tristano also predicts that under-performing locations will be closed.

Recently in the press, Hooters CEO Terry Marks discussed the chain’s need to make some changes. He’s stepped up Hooters delivery, which has been a revenue booster for many chains.

Marks said Hooters’ delivery revenue has grown by more than 30 percent in one year. The brand has also improved its menu by offering smoked wings and more craft beer options.

Tristano believes Twin Peaks will continue to expand, grow its market share, and take market share away from Hooters.

Twin Peaks has grown to 83 eateries, located in 26 states, with 28 company-owned units and 55 franchised. It opened two new outlets in 2018 and is slated to debut four locations in 2019. 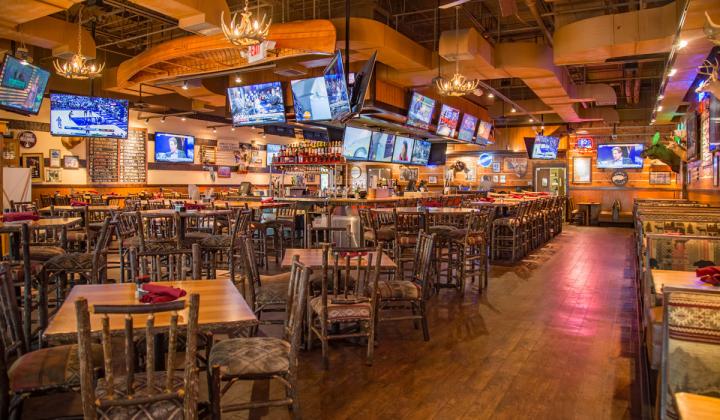 The secret to Twin Peaks’ success, says CEO Joe Hummel, who is based in Lewisville, Texas, outside of Dallas, is, “We understand our DNA and what makes our brand what it is. We’re not everything for everybody, but we understand our demographics.”

And that demographic is very clear: 74 percent of its clientele consists of men. Hummel says Twin Peaks appeals to “all kinds of men from millennials to Baby Boomers and everything in between.” Its audience frequents Twin Peaks, he says, for “bold and craveable food options, bar offerings, sports viewing packages, and a casual setting that includes cigar bars and large communal tables.”

Most locations contain 65–75 TVs and that covers a plethora of sports packages. “We have hockey fans sitting next to football fans, and we want to accommodate both,” Hummel says.

The chain’s menu consists of food items, made from scratch, fresh in the kitchen. Hummel says because of all the food networks on TV, “people have a more sophisticated palette. And you can’t fool the eater the way you could in the 80s.”

Patrons at Twin Peaks can choose among “spicy ribs, chicken tender basket, hangover burger [burger with eggs over easy, bacon and cheese on top] and smoked chicken wings,” he says.

Asked if there’s been any backlash over the Twin Peak waitresses (it doesn’t hire male servers), Hummel says not at all. He describes Twin Peak girls as “valuable team members that we know are someone’s daughter, girlfriend or wife or sister. We expect our guests to have the utmost respect.” Providing a safe and fun environment at work is critical to its mission.

Women patrons are major sports fans as well and come to Twin Peaks for salmon, ribeye, cobb salad, the hangover burger and great wine, margaritas and mimosas, he says.

The brand is also known for selling the frostiest beer in town, which Hummel says is based on a proprietary approach that includes “the chilling of the beer and the mug and serving it as the right temperature.”

Since it relies heavily on franchisees, Hummel, who was a former COO of La Cima Partners, Twin Peaks’ largest franchisee, says its selection process “runs deep and wide. We want to ensure that they take the same passion and care as we do.”

Hummel sees growth in Twin Peaks’ future and expects it to reach about 100 locations in the next two years or so.