Walk-On’s has 42 locations across nine states, with a goal of opening roughly 150 in the next five years

The concept has clawed back to flat sales amid pandemic.

Don’t refer to the COVID pandemic as the “new normal” around Walk-On’s Sports Bistreaux COO Scott Taylor—he hates it.

To him, the better-suited term is “next level” consumer expectations, something the Louisiana-based brand wants to meet with each transaction. It’s part of the reason why the restaurant started 2020 by shedding the “bar” portion of its name. It didn’t want to waste time on stereotypes.

“Yeah we’re a sports bar, but a lot of times we hate to get categorized like that because you get pigeon-holed with different expectations—typically not great food, typically not family-friendly, typically not necessarily the nicest facility—where we’re 80 percent food and 20 percent alcohol,” Taylor says. “That’s really unheard of in the sports bar environment.”

Walk-On’s has 42 locations across nine states, with a goal of opening roughly 150 in the next five years. Ten units have debuted this year, and about five more are expected before the end of 2020.

With multi-million AUVs and a hefty average check, it’s no surprise that numerous private equity firms have approached Walk-On’s over the years. But Taylor says the restaurant didn’t want a pure financial partner—it already has that within the company. If an investor wanted to come on board, it had to bring more to the table than just money.

10 Point Capital—a private equity firm that helps “founders create dominant brands”—stood apart from the rest. For evidence, one needs to look no further than the company’s portfolio, which includes Tropical Smoothie Cafe and Slim Chickens. Tropical Smoothie, which set sales records in Q3, is on track to open 85 stores this year. Meanwhile the 110-unit Slim Chickens saw double-digit same-store sales during the summer and has its eyes set on reaching 600 stores in five years.

So after holding multiple discussions, even through the COVID pandemic, Walk-On’s and 10 Point Capital announced an investment agreement in October.

“They have a pretty solid track record of working with founder-based companies, putting in different strategies,” Taylor says. “I think one of the things that happens when you’re in growth mode is there are so many different opportunities, so many different ways to go. I like the discipline they’ll bring to the group—coming in to help us with analyzing the right opportunities,  not necessarily chasing the things that don’t make a lot of sense right now.”

Much of 10 Point Capital’s interest can be derived from how Walk-On’s has successfully navigated the crisis after a tough beginning.

Taylor admits that in February and March, the restaurant took a punch to the gut. At the time, off-premises accounted for roughly 10 to 12 percent of the business. So when dining rooms closed, sales cratered as much as 80 to 90 percent.

“But, embodying the true spirit of a “walk-on” athlete, the restaurant didn’t give up. It quickly pivoted, and the chain has since clawed back to flat sales. Takeout remains 2.5 times what it was pre-COVID, with indoor capacity limits ranging from 50 to 75 percent. 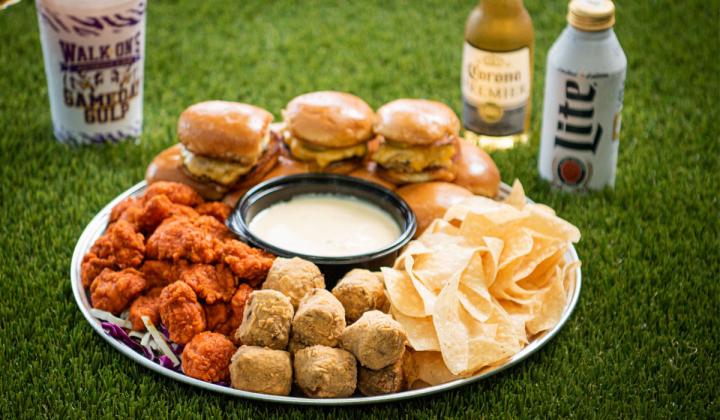 Walk-On's has met guest demand during the pandemic with take-home bundles for game day.

“We’re pretty darn proud of it,” Taylor says. “I think that all comes from just being out there, being present, doing things in the market that other people weren’t doing. We changed our model—we have drive-thrus now, we’ve got incredible curbside, you can pre-order on the app. All of the technology things that everybody’s scrambling to do, we had a lot of it already queued, so it wasn’t hard to flip the switch and put those things out there.”

Growth has been altered during the pandemic, but only slightly. Taylor points to a couple of situations in which area developers were forced to shut down and preserve cash to ensure they knew what was coming. The process was back on track after a couple of months, and only a few stores were pushed to 2021 when Walk-On’s expects to open 22 to 25 stores.

The chain has recently celebrated openings in Texas, Florida, and Tennessee and signed a three-unit deal in Mississippi. Taylor says Walk-On’s wants to expand at a pace where it can have valuable growth, because at a certain level, too many stores per year could result in an incongruence between quantity and quality.

“I think it’s the long play. Whether we executed the transaction with 10 Point or not, we were going to open 22 to 25 next year and then probably the same in 2022,” Taylor says. “So where they really help us is organizing resources around doing it beyond that as well as looking at these opportunities for different types of growth … The things that we’re not 100 percent fluent on, they’re going to bring that expertise to the table.”

He explains that so far, growth has been organic; Walk-On’s has done very little in terms of intentionally advertising its franchising program. A big focus going forward will be placing the opportunity in front of the right potential franchisees in the right areas. Ideally, Walk-On’s wants to continue growth in contiguous areas and expand from there.

Even as the brand soars toward what appears to be more of a “star scholarship player” status, Taylor says the restaurant will never forget where it came from. In a time when many expected the brand to hide in a corner, the COO says Walk-On’s decided to release a strong message into the marketplace.

Walk-On’s doesn’t miss opportunities, not even in a crisis. That’s part of the DNA.

“The Walk-On’s mentality is a lot about how we define our culture,” Taylor says. “I think it is humility, it’s understanding your role on the team, it’s team before self. That’s how we operate our company. That’s the culture inside of our four walls in the restaurant.”