Uno’s new model is inspired by its first-ever store and uses new equipment to speed up deep-dish pizza cooking times.

The model is a hybrid between fast casual and full service.

Uno Pizzeria & Grill is widely known as the pioneer of Chicago-style, deep-dish pizza after founder Ike Sewell debuted the first Pizzeria Uno in 1943, which remains open in the Windy City.

That history hits close to home for CEO Erik Frederick, a Chicagoland native who would spend Saturday nights driving 45 minutes to enjoy Uno’s classic deep-dish pizza. So as the brand considered a new concept to support its first franchising effort in roughly a decade, the CEO knew what he wanted. 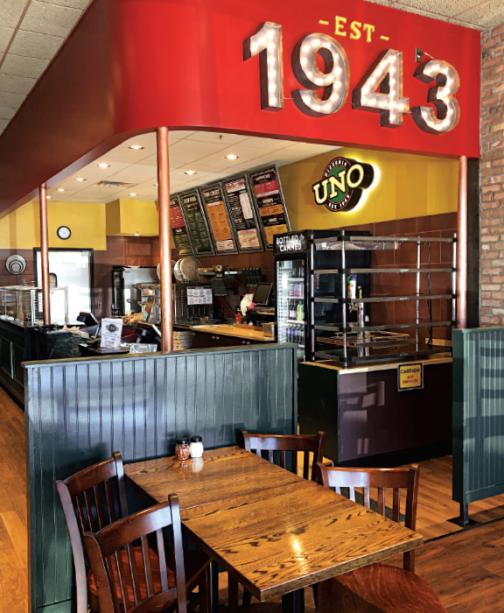 It wasn’t the larger, cookie-cutter casual-dining concept Uno transformed into along the Northeast, hundreds of miles away from the heart of Chicago. After being referred to as Pizzeria Uno for several decades, the brand had undergone a menu expansion, implemented new designs, changed its name to Uno Chicago Grill, and moved its headquarters to Boston.

Amid those shifts, the first Pizzeria Uno restaurant in downtown Chicago had remained the same, and Frederick preferred a return to those roots. To him, the brand’s latest franchise push presents an opportunity to spread the vibe, culture, and menu of the original Pizzeria Uno to markets nationwide.

“It’s a pizza joint,” Frederick says of the brand’s new prototype. “It’s not a casual-dining look and feel at all. It’s almost like the difference between Red Lobster and a seafood dive.”

Frederick calls the new Pizzeria Uno model a hybrid between fast casual and full service, with counter service at lunch and table service at night. The menu, about two-thirds the size of the brand’s typical casual-dining menu, is more pizza-centric but still includes natural add-ons like wings, salads, sandwiches, and desserts.

The concept is roughly 2,000 square feet, which isn’t too far off from the 3,000-square-foot space of the original Chicago location. But Frederick says that number is by no means an exact target. Instead, the model comes with a customizable floor plan that encourages operators to enter second-generation spaces that invoke a unique feel as opposed to a one-size-fits-all approach.

“The great thing about just the size is obviously lower build-out costs and lower rent and all of that,” Frederick says. “The other thing is, pizzas are the most profitable thing that we can sell. It lends itself to better margins. On a profit-per-square-foot basis, it’s going to be substantially better.”

He adds that even as more people return to dining rooms, Uno’s takeout and delivery business hasn’t waned.

The Pizzeria Uno model is equipped with new cooking technology that removes any notion that deep-dish pizza requires a longer cooking time. Frederick says oven technology has come a long way and that Uno’s operations team worked with Middleby Marshall, a restaurant supply company, to find the right equipment for quick and consistent cooking.

Now more science than art, the process is about having the capacity to meet the needs of consumers during peak times. The CEO says the chain has accomplished this by placing foods into the hands of guests in about 10 minutes.

READ MORE: How One Pizza Chain is Accelerating Vaccinations Among its Workforce

The prototype, which uses the same recipes and ingredients as the original location, opened last summer in Highland, Indiana, a suburb of Chicago. When Frederick visits with potential franchisees during Discovery Day, he takes them to the downtown store for dinner, and then they travel to the concept in Highland. Between those two destinations, no one can taste differences in the pizza, the CEO says.

At the inaugural location, off-premises orders make up more than half of sales, higher than what leadership anticipated. Although Frederick says the debut has been phenomenal, the service model and offerings are still being tweaked.

“We originally started with one of those models where you could go down the line, which I think is en vogue now,” Frederick says. “What we found is that with pizza, people normally know what they want. They come, and they’re not picking things out. That’s been a big lesson for us, and going forward, we’re more likely to use it as more table space or even a beer and wine bar.”

In addition to in-line and standalone sites, Uno is also looking to enter hotels with a full-service restaurant that’s essentially a replica of the original Chicago store, down to the “water stains on the ceiling,” Frederick notes.

The CEO adds that Uno’s ROI is especially compelling for hotel owners who already have a preexisting kitchen and are only a few pizza ovens away from opening a location. Hotel guests provide built-in dine-in traffic, Frederick says, and the restaurant would also benefit from takeout and third-party delivery.

Uno also plans to open takeout/delivery–only locations, strictly as a supplement and “return on investment kicker,” as Frederick puts it. As of November, Uno planned to sign a lease to open a 1,000-square-foot, off-premises store in Orlando.

“We’re going to do it for all the business reasons we’ve done before, but in terms of a prove-it-out, I don’t feel we need to do it,” Frederick says. “You just look at our [full-service restaurant] prototype and say, OK, here’s the business we’re doing on takeout and delivery. Just imagine a smaller space with a smaller build-out costs.”

At the time of publication, Uno had three franchisees signed up for the new prototype, including one who wants a hotel-based restaurant; another who’s eyeing a standalone version of the Pizzeria Uno model; and a third who operates a couple of hotels but wants to open a satellite restaurant about 20 miles away, as well as a takeout/delivery unit.

Frederick says other operators in the pipeline are close to signing deals. One franchisee who spent time with the CEO in Chicago even expressed interest in opening 20 new locations across multiple states.

In terms of where these newest stores will land, the CEO says Uno is more focused on the “who” instead of the “where.” The chain is targeting operators who are sophisticated enough to have their own infrastructure and can justify building multiple units.

In 2022, the company hopes to sign 15 new franchisees, and Frederick feels confident in that goal because of where Uno stands in the restaurant field.

“It’s not [a] brand-new pizza idea, nor is it an established brand where there’s no white space,” he says. “Our value proposition is we’re a very well-known brand in the category with existing infrastructure support and massive amounts of white space.”