The sports bar hopes to triple in size by 2027.

Twin Peaks claims to have the coldest beer in the business, but its growth strategy is bringing the heat.

At the close of July, the sports bar stands at roughly 80 units, with about 55 of those owned by franchisees. By the end of 2021, Twin Peaks should expand to 90–91 restaurants, including openings in places such as Amarillo, Texas,; Kansas City, Missouri; Columbus, Georgia; Fargo, North Dakota; and Myrtle Beach, South Carolina.

Internationally, it’s the same story. Twin Peaks opened its first Latin America location in Mexico City in November 2020, and two more are planned for later this year. With a goal of signing one to two international deals, the chain now has its eyes set on rapid development in regions like Eastern and Central Europe and Southeast Asia.

CEO Joe Hummel projects the brand will top the 100-unit mark sometime in late summer 2022. And by the beginning of 2027, Twin Peaks should be at more than 275 stores.

“We have a lot of interested franchisees,” Hummel says. “Our current franchise base is very aggressive, taking advantage of a lot of strong real estate that became available during some of the tougher times of COVID. Our brand was able to withstand that where some of the other brands weren't able to withstand it. So our teams have been attacking that real estate, which has afforded us a lot of great abilities for growth.”

A crucial part of the expansion effort has been investment in leadership. Earlier this year, Twin Peaks brought on Glenn Moon and John Brisco—industry veterans with decades of experience—to handle domestic and international franchise development, respectively.

Moon came to Twin Peaks with more than 15 years of experience in hospitality investment, real estate development, and franchise sales experience. He’s spent most of his career with major hospitality brands like Hotels International, Wyndham Hotels & Resorts and Best Western Hotels & Resorts. Brisco joined the company with over 30 years of executive international and domestic development wisdom. He’s responsible for Ruby Tuesday’s international business plan and expansion into 38 countries in five years. Brisco also worked at Sbarro, where he signed agreements for 1,000 stores to be developed over the next decade.

“Well obviously they're seasoned executives who are used to deal structure and have a lot of great context in the world of franchising,” Hummel says. “Glenn comes out of the hotel segment, so he has a lot of strong context there with people and partners that understand land development and large capital X projects. John, he's opened in probably 75 different countries over his career in the thousands of units.”

“So we're excited,” he continues. “Both of those two have helped us really write our five-year vision plan to exceed 275 stores over the next five years. They were very instrumental in helping us see that roadmap based off of their knowledge and what they felt the depth of this brand could take out domestically and internationally.”

As Brisco, Moon, and the development team sign deals, they’re offering franchisees a suite of flexible options that don’t handcuff them to a certain piece of real estate. Hummel notes the past eight openings have resulted in “tremendous” AUVs, and he attributes that to the vision of Chief Development Officer Michael Locey, Senior Director of Design and Development Paul Stevens, and Director of Construction Robert Pulley. Each collaborate to analyze what older stores provided guests, and where they missed opportunities.

Twin Peaks is able to capitalize on those missed opportunities with new builds, but the chain is also flexible enough to take on many second-generation buildings that didn’t make it to market or died off because of age.

“When you think about the lodge itself, no lodge is really the same wherever you go out and about in the mountains looking at different lodges,” Hummel says. “That's our approach with our buildings. We have a prototype. We maximize space, outdoor space, indoor/outdoor bars. Obviously many, many TVs anywhere from 65-75 inches to 205 inches. Our partners down in Bryan, Texas, just put in a 205-inch TV. So always playing with the design.”

Sales certainly aren’t impeding growth. The chain saw positive same-store sales in its fiscal 2020 year-over-year, and in the current quarter, comps are double-digit positive against 2019. Additionally, off-premises rose from a nominal amount pre-pandemic to 5 to 7 percent of sales. Hummel acknowledges the off-premises mix isn’t as high as other casual-dining chains, but he’s happy with the lift and knows Twin Peaks will always be an experiential on-premises brand first and foremost.

That’s why onlookers shouldn’t expect future growth efforts to focus heavily on ghost kitchens or virtual brands. With Twin Peaks spending so much time on the in-store atmosphere, restaurant kitchens are busy and don’t have excess space or downtime to cook additional brands for delivery. However, that doesn’t mean the brand will completely remove itself from the discussion. Hummel says the brand has tested some virtual brands in the Dallas-Forth Worth market and the results have been pleasing. The CEO believes the delivery-only concepts could potentially result in a bump in sales, but he’s very cautious about making sure kitchens aren’t overwhelmed and that the on-premises guest comes first.

“We'll continue to explore, play with it, utilize it, where we have some opportunities,” Hummel says. “Maybe there's some gaps in the day that we can fill in, but our primary focus is Twin Peaks and that guest that comes in on a daily basis. And then supply chain is always fun to deal with, and we want to make sure the Twin Peaks brand has the proper supply chain. … The supply chain has been challenging for everybody over the last three to six months, and we want to make sure our supply chains stay focused on the Twin Peaks guest and not a one-off virtual brand that doesn't have a huge brand affinity like ours.” 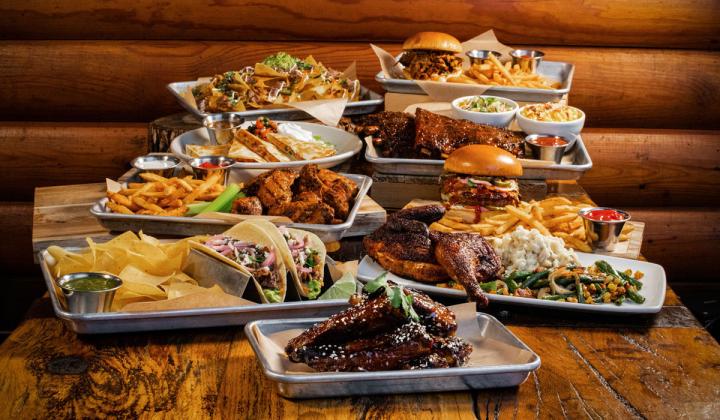 “We always say to ourselves as we look at our success or our growth, let's make sure we govern ourselves with innovation, evolution, and build something to last,” says Twin Peaks CEO Joe Hummel.

With that on-premises focus in mind, Twin Peaks is exploring how it can incorporate the budding sports betting market inside its restaurants. Fellow sports bars Buffalo Wild Wings and Hooters have already hopped on the train. In September 2019, Buffalo Wild Wings announced a partnership with MGM Resorts International and its sport betting venture, Roar Digital. In March 2020, Hooters activated sports betting in select markets through KonekTV, which displays real-time game statistics, analytics, and odds from BetRivers Sportsbook.

Hummel says Twin Peaks has partnered with some consultancy groups in Las Vegas to understand the best way to move forward. The company was forced to place the venture on hold due to the pandemic, but talks are now ramping back up. The global sports betting market is expected to grow by $134 billion from 2020 to 2024, according to Technavio, a global market research firm.

“It's certainly something that we're going to continue to peel back and look at because it's a natural fit for our brand,” Hummel says. “We obviously are the best sports bar in the country, and why wouldn't we complement our guests with some of those potential opportunities also when it comes to sports betting and gaming?”

What’s to stop Twin Peaks momentum? The supply chain and labor shortages have definitely played a factor, Hummel says, but not to the point that it’s prevented development. Lumber and steel have escalated in costs and require longer lead times, but Twin Peaks’ construction and design team proactively purchased equipment and stored materials in warehouses. Workers are also value engineering pieces of equipment to mitigate some of the cost increases.

In terms of the labor crisis, there have been shortages in the construction field, but Hummel notes that Twin Peaks has forged solid relationships with contractors, which has minimized the amount of delays. At the store level, Hummel says labor has “hurt other brands more so than us.” Each day operators spend a great deal of time monitoring the size of shifts to ensure they not only accommodate guests, but also the well-being of employees.

As the CEO explains, Twin Peaks and its current success are fueled by culture and the strength of employees. That’s exactly how the brand plans to continue its winning streak for the rest of 2021 and into 2022.

“We always say to ourselves as we look at our success or our growth, let's make sure we govern ourselves with innovation, evolution, and build something to last,” Hummel says. “And that's whether it's the building, the employees, a food and beverage offering, partnerships—we want to understand our guests and be narrow and deep on what we know our demographic is.”