Tom's Urban has five locations, and see a path to expansion through non-traditional venues.

Tom's Urban is Out to Reimagine the Eatertainment Segment

The growing concept, backed by Smashburger's cofounder, is catering to the millennial mindset.
January 2019 Danny Klein

The term “eatertainment,” often conjures up images of arcades, bowling alleys, bocce courts, and golf clubs. But Tom’s Urban views the experiential-dining experience through a different lens. In an industry where many bar and grill chains can’t get the TVs off the walls fast enough, Tom’s Urban is taking the reverse course: Give guests “screen play” they can’t ignore.

When it comes to TVs, there’s an undeniable issue brewing for restaurants: Every consumer has one, a big screen probably, with sound systems and couches that don’t judge sweat pants. Why leave home then? The answer to that question is twofold mostly: Focus on food so the added value outweighs the convenience. Second, create an atmosphere that makes putting on jeans worth the effort.

That’s easier said than done, naturally, but it’s exactly where Tom’s Urban wants to live. The five-unit chain, which opened its latest restaurant at the Denver International Airport and is owned by Black Shamrock Partners, plans to “reinvent the sports-centric, entertainment-centric, and captive-audience centric approach” to the restaurant business, says executive chairman Tom Ryan, who co-founded fast casual Smashburger in 2007 with Rick Schaden. And contrary to how some sports-bar chains approach the challenge, Tom’s Urban isn’t moving away from TVs in favor of other elements—it’s turning the dial up. Each location has 75-plus screens, all of which can be viewed from any seat in the restaurant. Some are tuned to sports, others to music videos, and the rest to TomTV—personalized, hand-curated content exclusive to the concept.

Tom’s Urban experiments as well with live, interactive screens, like trivia, giving guests a chance to interact via mobile devices. This might grow into sports betting someday if regulations allow it, which would kick open a whole different door of possibilities (something Buffalo Wild Wings has addressed in the past).

“The point is to make watching a game, particularly during watch events, something worth coming out for,” Ryan says. “Entertainment centers at home are getting so sophisticated. But we think there’s a void in restaurants really thinking hard about how do you make a destination place to watch a game really special versus watching it at home.” 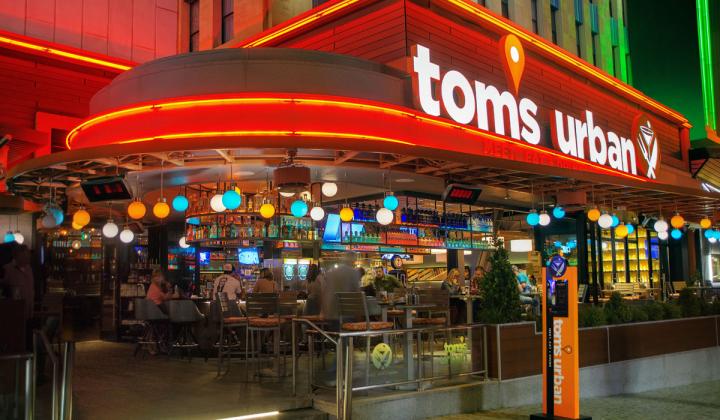 Tom's Urban puts the focus on screen play in its restaurants.

The eatertaiment leader in non-traditional

Tom’s Urban’s growth strategy is fueled by volume. The more traffic the better. Yet it isn’t enough for the concept to just land on a crowded city block somewhere, Tom’s Urban wants to surround itself—literally, really—with action. And it’s found the non-traditional space to be the perfect fit.

Currently, the locations are at L.A. Live; Mohegan Sun in Connecticut; Ilani Casino in Washington; Las Vegas, and the Denver airport spot. This has created an interesting business model for Ryan’s concept. While the nearby entertainment options bring foot traffic by the crowd-full, they also stress the dynamics of a full-service operation. Very often, Ryan says, guests will walk in needing to leave in 45 minutes.

Tom’s Urban was built from the outset to accommodate this demand. He says the brand loves “urgency and density.” It’s where Tom’s Urban separates from the restaurant pack. Ryan believes airports, casinos, campuses, and so on, will seek them out because they’ve proven capable of serving and satisfying volume. Locations range from 6,000–11,000 square feet and Tom’s Urban can adjust as needed. So the nimble nature of the chain can fit into non-traditional venues of all kinds as well.

The speed element is critical, Ryan says. When Tom’s Urban knew it was going into L.A. Live, a massive entertainment complex adjacent to the Staples Center and Los Angeles Convention Center, it figured (correctly) there would be a disproportionate amount of business walking in within 90 minutes of whatever event they wanted to attend.

Tom’s Urban designed all of its menu items to work off platforms that allow back-of-the-house employees to take a linear first-in, first-out approach to the way they serve food. Everything falls under a 6–7 minute cook time. There’s mise en place done ahead of time on all platforms. And then a lot of the Tom’s Urban’s products are designed to be constructed, garnished, and delivered from a hot-cold table setup. Much of the menu is done on a proprietary version and approach to impingement ovens, chain grills, batch frying. The process creates a linear-flow program that gets food out quickly and consistently, Ryan says.

On the beverage side, Tom’s Urban solves the problem with size. Guests can order pints, 22-ounce drinks, or 40-ounce varieties.

"What Tom’s Urban is doing is reimagining what a modern sports bar should be. And that behavior is not something people have to learn. Every noun in our portfolio and narrative is well understood by consumers." — Tom Ryan, Tom's Urban executive chairman.

Ryan says customers will come in, if they’re looking to get lubricated before an event, for beer that’s running $45–$50 a gallon instead of the $160 you’re likely to see inside an arena. “You can come in a half hour before hand, order a 40-ounce beer, and you’re going to get taken care of,” Ryan says.

The same strategy applies to cocktails, with Tom’s Size options offering basically triple the amount of a regular drink. This caters to guests who only want to wait in line once on a busy night.

“The bottom line is that between operating platform and really thinking through the logistics and occasions of how people need and want alcohol prior to an event—that set up our menu design, our bar service design, and how we handle density and urgency better than anybody else,” Ryan says.

And if you’re not in a rush? That’s where the rest of Tom’s Urban’s differentiators come into play.

The four-wall experience turned up

“We are in the millennial age where experiences count more than transactions,” Ryan says.

He adds that the industry appears to be mired in the “last generation of sports bars.” But with any shift, there’s always opportunity. The way Ryan puts it: At most sports bars, you could convince your wife or girlfriend to go with you twice. “We think there’s a huge opportunity around this sea of change,” he says. “If you can match up a modern, contemporary approach to a sports-and-entertainment venue with a millennial tonal focus around food and drink and the rest of that experience; if you couple that with what else matters in the real world, which is the mindset that people are looking for a story—you’ll have something.”

“One of our basic tenets is that, in general, people have a really hard time discovering totally new things,” Ryan adds. “What Tom’s Urban is doing is reimagining what a modern sports bar should be. And that behavior is not something people have to learn. Every noun in our portfolio and narrative is well understood by consumers.”

Tom’s Urban starts by offering a menu that satisfies everyone from the traditional hockey jock looking for burgers and wings to somebody hoping for something highly differentiated. Xiangxiang Crispy Duck Wings for example, or the Big Ass Egg Roll, which presents exactly as it sounds, with Adobo chicken, rice, shredded and seasoned vegetables, peanut sauce, cilantro, lime, green onions, and an Asian glaze.

Entertainment wise, Tom’s Urban’s puts eclectic videos (those not showing events) on screens and plays modern and vintage music that “we find to be highly entertaining to modern customers,” Ryan says. Like bringing MTV back, for instance. And then the element of interactive screens, where guests can play off one another and keep the conversation flowing.

There are also moments inside the restaurant that make it feel like an event itself. At halftimes, between hockey periods, seventh-inning stretches in baseball, etc., Tom’s Urban will host mini-contests. One example: Guests hoist (not drink) 40-ounce beers for as long as they can to see who can outlast the field. “We really want to trigger the notion that if you’re going to go watch a game this is the place you want to go beforehand,” Ryan says.

At the same time, “if you’re going for a watch event, whether it’s by yourself, with a date, a couple of friends, or organized, we want to provide people with the most tailored added-value experience around food, drink, and entertainment we can,” he adds.

Tom’s Urban designs locations to satisfy multiple occasions. Guests can sit at the bar. High tops. Booths. There’s also what the chain calls “bottle rooms,” which are small, private sections. There are still screens but the volume is lowered so a couple could still chat while watching a game.

In September, Tom’s Urban appointed Shannon McNiel president and chief operating officer. He most recently served as a market partner with Texas Roadhouse and previously held an executive leadership role at Cheddar’s Scratch Kitchen. During his time at Darden, McNiel worked operational roles at Red Lobster and LongHorn Steakhouse as well.

Ryan says Tom’s Urban’s main focus currently is its current asset base. But growth is in the works. The brand is looking at airports. Entertainment centers. Casinos. Anywhere where it’s ability to handle surge capacity can pay off for both parties.

Ryan says Tom’s Urban is mining “multiple opportunities.” He can see one to two new locations opening in 2019 and then a pipeline of two to four per year, maybe more, after that. “We don’t mark the number and then build against that. We find the sites,” he says.

Crouse, like McNiel, came from Texas Roadhouse, where she won the steakhouse chain’s service manager and kitchen manager of the year awards in consecutive years. Her most recent role was corporate training and development coach for 160 locations.

“Tom’s Urban has a truly unique edge in today’s eatertainment space offering our guests a memorable experience with our innovative menu, extensive drink offerings and immersive entertainment options. Joanna, Jane, and Lori will play a vital role in strengthening our team to help us achieve our short- and long-term strategic growth objectives,” McNiel said in a statement.