Dave & Buster's sales took a dive in November once COVID-19 cases surged and restrictions picked back up.

The eatertainment brand is bracing for a rough stretch.

The purgatory state restaurants find themselves in—wedged between looming vaccine distribution and a COVID-19 case resurgence—continues to flare up a familiar cliché: It’s going to get worse before it gets better.

But for Dave & Buster’s, it’s an irrefutable reality. The eatertainment chain’s same-store sales plunged 75 percent in August, yet started to tick up as store openings did and public fears subsided. Comps declined 62 percent in September and 59 percent in October. Over the full quarter, Dave & Buster’s averaged 74 reopened, fully operational stores in its comps base that generated revenues at 57 percent of 2019 levels, up from 35 percent in Q2 when the brand boasted an average of 39 open comp venues. And reopened location sales peaked in late October at a 68 percent index to year-ago metrics, with the top quartile reaching a combined index of 91 percent. More telling, four restaurants actually generated figures above 2019 results.

In Q3, 68 of Dave & Buster’s 104 reopened (total, not mature comp units) achieved positive store-level EBITDA, and 80 did so in October, bringing the company “within a few million dollars” of breakeven, despite the fact all of its California and New York stores were still closed, which represent 25 percent of Dave & Buster’s overall sales.

Simply, the company’s recovery was pointing up.

November, though, proved a different story. And December is likely to be even bleaker.

As infections and deaths eclipsed earlier records as well, more than 20 states rolled back reopening plans and put a lid back on capacity for restaurants. Renewed restrictions led to 15 store re-closings throughout November for Dave & Buster’s and, in turn, overall sales took another shot. The chain closed Q3 with 104 opened stores, but now has 90, or 65 percent of the system.

Conditions resulted in business of about $32.6 million, including a 69 percent drop in same-store sales and EBITDA loss of roughly $11 million—in just one month. The company burned through EBITDA cash of $2.7 million per week.

December special events typically represent about 15 percent of Dave & Buster’s overall sales in the month. Early on, the company was actually booking some parties and allowed itself to hope for the best. “We kind of lost that bet a bit,” Jenkins said.

Even Thursday, the company lost additional stores temporarily to restrictions. Jenkins said two dropped and the company was bracing for a “further dial back.”

Yet as tumultuous as the coming weeks promise to be, Dave & Buster’s feels better positioned than early March, when rollbacks and shutdowns dominoed the entire organization. “I’m not trying to minimize it, but I do view this as a temporary setback,” Jenkins said.

He noted vaccines on the horizon. Also, the projection when restaurants reopen this next time, there won’t be the stop-start-close activity that’s made the past few months so daunting.

“I think we’re pretty optimistic that when we get these stores open again, we have a pretty good shot that they’re going to stay open,” Jenkins said, “and we’re on a path to better days.”

When Dave & Buster’s does get back on line, it won’t be the same chain. Margo Manning, the brand’s chief operating officer, said Dave & Buster’s implemented and refined a number of service model and menu initiatives ahead of COVID-19. Originally, they planned to refresh the system in 2020 and ignite a banner year for Dave & Buster’s. Naturally, that didn’t happen. But the updates continued stirring even as priorities shifted from brand revitalization to survival tactics. 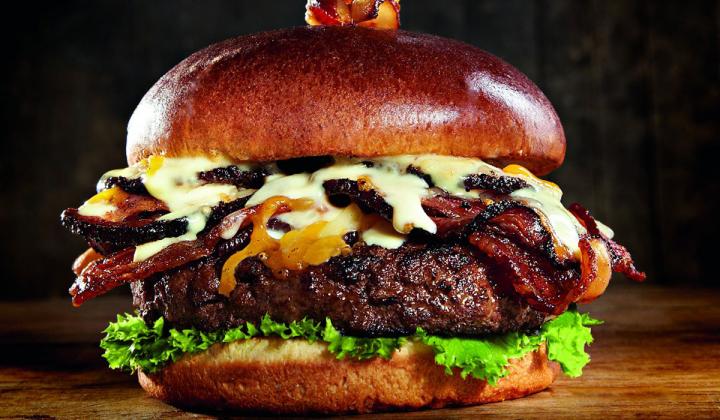 One major objective was to establish a stronger differentiated food identity for Dave & Buster’s. Manning said they’ve landed on a fresh theme—“Inspired American Kitchen’—which the chain plans to bring to market in 2021.

Manning said it’s rooted in enhanced flavors and quality ingredients, and will enable guests to explore new flavors while also enjoying a balanced selection of familiar favorites. Operationally, the menu is designed with simplification in mind in an effort to boost consistency and quality, and get customers back into the arcade as fast as possible. It will feature 28 items, or 33 percent fewer than the 42 on Dave & Buster’s pre-COVID-19 menu. The company reopened stores with a temporary 15-item list. Its transition to the new menu began in mid-November and there are currently 17 offerings, with six more dishes planned for early March and the 28 expansion expected by late April.

“Taken together, we expect our new menu to drive an improved guest experience to increase our food attachment rates and to accelerate table turns, all aimed toward increasing food and beverage sales,” Manning said.

Dave & Buster’s supported the menu with a dedicated training program focused on flavor profiles and cooking techniques. And it’s in the process of rolling a new piece of kitchen equipment to every store to speed up cooking times. Additionally, Dave & Buster’s plans to upgrade the company’s kitchen management system to “facilitate a seamless flow of food.” That’s targeted for the first half of 2021.

From a service-level perspective, Dave & Buster’s worked to empower guests to control more of their in-store experience, which would then free up employees to focus on cross-selling and up-selling. The nucleus of this effort, Manning said, consists of tablets, kiosks, and a mobile self-service order and pay platform that unlocks a completely contactless experience. Five new stores launched on the hybrid platform and “have been well received by our guests,” Manning said.

Another new element arrived in November with the launch of third-party delivery via DoorDash and Uber Eats at 105 locations (essentially all that reopened in Q3). The plan is to add California and New York once they return.

Lastly, to expand reach and leverage new kitchen capabilities, Manning said Dave & Buster’s is starting to look at virtual brand potential from specific food categories. “We’re exploring concepts that could be rolled out nationally, regionally or offered in specific markets or offered seasonally or even offered around specific major events,” Manning said.

Some other recent upgrades remain on the table, but are taking a backseat somewhat to strengthening the company’s core business.

It also experimented in the fall with sports programming to see how guests would respond to a more immersive watch experience featuring live DJs and events like vendor-managed beverage tastings. “We’re taking the learnings from these tests and refining our programming and event strategies to be in a position to expand them as COVID restrictions ease,” Jenkins said.

At this point, however, Dave & Buster’s doesn’t have plasn to further rollout Wow Walls (there are about 50 currently and they feature nearly 50-foot-wide LED TV screens that can show up to six events at once) as it guards capital.

The chain also launched a new national brand marketing campaign in September with CMO Brandon Coleman, a former Del Frisco’s president who joined in February. It was directed by new agency add Mother of New York.

Jenkins said the sports ran for five weeks and were a “meaningful investment.” But Dave & Buster’s delayed and canceled holiday plans. Jenkins said they want to reserve powder for a time when COVID fears are actually waning, not increasing, and the appetite for guests to get out “is not something we’re swimming upstream on.”

But again, the campaign provided a noticeable boost in September, Jenkins said, which points to long-term resilience. Dave & Buster’s just needs to get stores open again.

“… we have the playbook to navigate through this resurgence and feel confident that demand will return once resurgence subsides,” Bowman said.

One potential development Jenkins briefly touched on was the opportunity of sports betting. Kevin Bachus, Dave & Buster’s SVP of entertainment, is “deep into those discussions” with a potential partner, Jenkins said. He didn’t offer any additional details, but said more could come after Q4.

Comp sales for the full quarter slid 66 percent, year-over-year. Non-comparable store revenues for the period were $20.1 million, down from $40.1 million in the year-ago quarter.

Dave & Buster’s ended the quarter with $314 million of availability under its revolving credit agreement, net of a $150 million minimum liquidity covenant, and $10 million in letters of credit.

Bowman said the company’s improved liquidity has “alleviated the substantial doubt about the company’s ability to continue as a going concern and the company has sufficient liquidity to satisfy its obligations over the next 12-month period.”

“… We’ve demonstrated the resilience of the D&B brand and the pent-up demand that exist among our guests to return to Dave & Buster’s unique menus. When they do, they’ll be greeted by an inspired team, a fresh new menu, a more customer-centric experience and the good clean fun they’ve come to expect from Dave & Buster’s,” Jenkins added.

Steak and Ale Readies for a Comeback of Epic Proportions
Dave & Buster's Enters the Metaverse by Opening on Roblox
Omni Hotel at The Battery Atlanta to Open New Concept, National Anthem