The 2,500-square-foot restaurant is expected to earn $2 million in AUV.

COVID’s acceleration of off-premises has pushed several casual-dining brands to rethink development strategies, namely a shift into the quick-service segment.

IHOP, Buffalo Wild Wings, Hooters, Friendly’s, P.F. Chang’s, Golden Corral, and others have either rolled out, tested, or considered leveraging smaller formats to meet the new age of convenience.

At the ICR Conference on Monday, the self-described “most recognized bar in the world,” unveiled Fridays on the Fly, a 2,500-square-foot delivery and to-go focused concept geared at penetrating markets inside and outside the U.S.

“The pandemic has really become an enabler,” said CEO Ray Blanchette. “What always inhibited growth of smaller footprints was people still want to eat on Friday and Saturday night at 7 o’clock, so if you don’t have the capacity to handle them, it’s hard to get to your average unit volume. The pandemic changed all that. Now that 30 percent of revenue comes away from restaurant, we can actually do both.”

The first Fridays on the Fly is under construction, although Blanchette did not indicate in which market or how many the company planned to open. TGI Fridays estimates each location could earn $2 million in AUV and $300,000 in annualized EBITDA, with a $700,000 investment and payback period of 2.3 years.

The brand’s top 25 restaurants generate an average of $1.7 million in off-premises revenue per year, so the strategy will be to look for markets with similar demographics as those performers and grow the Fridays on the Fly concept in these areas.

“We know and believe strongly that the demand for off-premise is here to stay,” said President and COO John Neitzel. 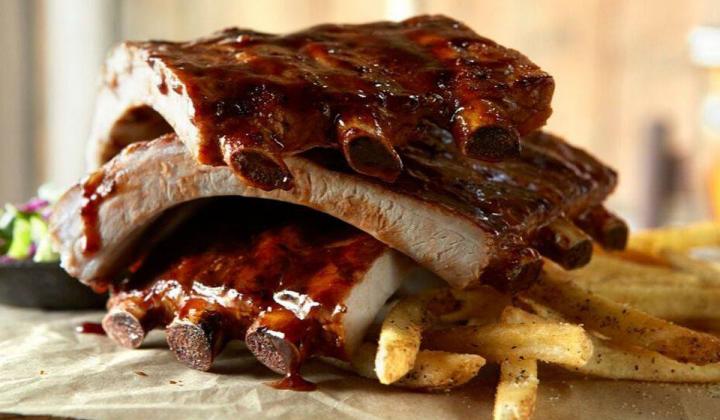 TGI Fridays finds itself still in the throes of a turnaround effort, which dates back to the hiring of Blanchette in October 2018. About a year later, the chain announced its intentions to go public with special purpose acquisition company Allegro Merger Corp. as part of a $380 million deal. At the time, the restaurant had roughly 840 restaurants, including 396 in the U.S. In Q4 2019, corporate and franchise same-store sales dropped 9.4 percent and 12.8 percent, respectively, and traffic declined by 5.9 percent and 11.4 percent.

When COVID hit, sales dropped roughly 80 percent. Because of those challenges, the merger agreement was canceled in April 2020.

Is a TGI Fridays Comeback in the Cards?

Challenged by COVID, TGI Fridays Fights its Way Back

During its comeback, TGI Fridays has focused on elevating its digital business. Amid the pandemic, the restaurant upgraded its online ordering platform and saw improvements in conversions, upsells, and average order value. Additionally, the brand has continued to invest in its rewards program, which includes members who visit four times as much and spend 12 percent more than nonloyalty guests.

“The majority of our invested capital is being spent in the digital arena to continue to maximize and optimize these e-commerce channels, as well as deepening the relationship that we have with our stakeholders, as well as improving some execution both in-restaurant and for our off-premise experience,” said Chief Experience Officer Sara Bittorf.

To bolster its digital presence even further, TGI Fridays executed two key virtual restaurant partnerships in 2021. In September, the casual-dining chain signed an agreement with REEF Kitchens to launch 300 ghost kitchens globally in a little more than four years. From this deal, TGI Fridays expects annual royalty between $10 million and $25 million after 2025.

The restaurant then announced a joint effort with digital kitchen operator C3 (Creating Culinary Communities) to insert the company’s virtual brands in 170 corporately run stores nationwide. TGI Fridays is currently testing ghost concept Krispy Rice in 14 California and Maryland/Washington, D.C. locations, and early results show $40 in average check, $4,000 to $10,000 in sales per unit per week, and high consumer acceptance. At these pilot restaurants, Krispy Rice is also available in the dining room and through TGI Fridays web and app platforms.

“They have some really sexy, some really cool brands that interestingly enough, we can run these without making them subject to our current bottleneck,” Blanchette said. “And so it truly does expand theoretical capacity.”

Fridays on the Fly, which will also offer these virtual concepts, is one of five growth vehicles. The other four being U.S. franchisees, international units, company-run stores, and consumer-packaged goods.

There are 154 franchised stores in the U.S. in 25 states, led by franchisees with an average tenure of 15 years. The locations earn $2.7 million in AUV and saw double-digit same-store sales growth in the back half of 2021 against 2019. Meanwhile, there are 157 company-run restaurants in 14 states with an AUV of $3 million.

Internationally, TGI Fridays operates 379 stores in 53 countries, and Blanchette believes there’s opportunity to return to 30 openings per year and more than double the footprint, with much white space in Europe and Asia.

Global markets are also responsible for the chain’s growth in consumer-packaged goods. The channel’s compound annual growth rate was 7 percent in recent years, but has now increased to 12 percent after identification of new growth markets, like the U.K., which represents 10 percent of royalty streams after only one year.