Texas Roadhouse’s Pandemic Response Was Always About its People

From executives donating salaries to safety protocols, the steakhouse giant has led with an employee-first approach.

In any other year, a casual-dining brand reporting third-quarter losses of 6.3 percent in same-store sales wouldn’t likely be marked as a success, but amid the COVID-19 pandemic, Texas Roadhouse’s segment-leading single-digit negative comps are proof of just how strange 2020 has turned out to be. With unexpected dining room closures and stay-home mandates in spring, summer reopenings, and now a new rash of closure orders as cases surge post-Thanksgiving, no sit-down restaurant has emerged from the pandemic unscathed or unchanged. Texas Roadhouse is no exception.

In early March, the brand’s 600 units averaged weekly sales of $118,512, only $9,115 of which was driven by off-premises sales. However, by early April, Texas Roadhouse units averaged $41,892 in weekly to-go sales. By September, off-premises orders made up 21.1 percent of the brand’s business. And when Texas Roadhouse released its third-quarter data in early October, the chain’s monthly sales comps were already reaching a slightly positive 0.8—a feat made even more notable by the fact that it was achieved without layoffs.

Yet when Texas Roadhouse’s direct competitors, such as Carrabba’s, Outback Steakhouse, Chili’s, Applebee’s, Denny’s, and IHOP, posted losses of 9–30.2 percent for the same quarter, one wonders how a brand that started the pandemic with such a tiny off-premises business came out ahead.

While one component of the brand’s success was its smart early pivots toward more robust curbside and outdoor dining options, Travis Doster, vice president of communications for the brand, believes Texas Roadhouse’s ongoing commitment to serving the 75,000 people who work for the company was equally as important.

“When the pandemic started, 93 percent of our business was sit-down and dining rooms,” Doster says. “But we’re very fortunate to still have Kent Taylor, founder of Texas Roadhouse, as our CEO. The first words out of his mouth were, ‘How do we take care of our employees?’ And that’s driven everything we’ve done since.”

A LOOK BACK AT THE COVID TRAIL:

Doster says in March, the first act Taylor made was to forgo his salary and bonus until January 2021, making him one of the first of many industry CEOs to do so. Between his base salary bonuses, this move equaled more than a $1 million donation, which was put toward employee-focused initiatives. Following his lead, several other Texas Roadhouse executives also gave up compensation in order to help the company better manage its financial situation.

Texas Roadhouse, which is 85 percent company owned, used this influx of cash to pay health insurance premiums for employees and to offer front-line employees at corporate stores financial stimulus packages in March and April. Meanwhile, Doster says owners of the brand’s franchise locations were allowed to decide whether they would also give employees these bonuses, but each location ultimately did so.

Doster says Taylor also personally donated $5 million to Andy’s Outreach, which is a fund that has offered financial support to employees for more than a decade. In order to better help employees during the pandemic, the company created new COVID-specific guidelines for the program so that frontline workers could ask for grants, and so far, more than $1 million has been granted to employees.

In addition to promoting this program internally, Texas Roadhouse also educated staff about the availability of its employee assistance hotline staffed with counselors that employees at all levels of the company can speak with about mental health issues, such as anxiety. Meanwhile, store operators reached out to every employee at their locations at least once a week by text or by phone to check in and lend support, particularly early on when payroll hours were being cut.

“We saw a lot of companies that decided layoffs would be their first move,” Doster says. “We have a very conservative balance sheet, so we were able to do some things others can’t, but I think this generosity at all levels of the company, as well as the dedication of our operators to their teams says a lot about who we are as a brand.”

“[CEO] Kent [Taylor] often says ‘I’m not going to sit here in Louisville telling people how to run their businesses.’ We have smart, hardworking operators, so we gave them freedom to figure this out for themselves, while supporting them with the resources they needed to do the job," says Travis Doster, vice president of communications at Texas Roadhouse. 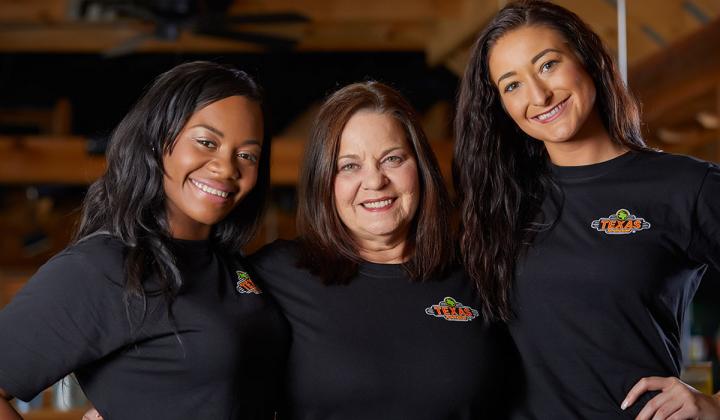 Yet these efforts weren’t the only way Texas Roadhouse supported its employees. Doster says the brand’s other top priority was securing protective gear, such as masks, gloves, and even goggles, even before any mandates about such equipment were passed. The company also rolled out temperature checks and symptom surveys to help keep employees safe, as well as educated staff about how they can wash hands, wear masks, and take other measures to stay safe at work and at home.

Next, Texas Roadhouse turned its attention to protecting employees' livelihoods by expanding operations. In the first few weeks, 100 percent of the company’s business pivoted to off-premises dining. While this meant employees—which the company calls “roadies”—who were hired to be hosts or servers found themselves suddenly delivering orders to the parking lot instead, many responded positively to the shift.

“The change required our roadies to change occupation and mindset, but everybody rose to the challenge and had fun with it,” Doster says. “We had speakers in our parking lots playing the country music we’re known for, and our employees even did line dancing in parking lots to recreate the energy and excitement that guests would get in the restaurants.”

Additionally, Doster says operators of corporate stores are treated as owners of their restaurants and were given the freedom to decide how their locations should function during COVID. This meant that in addition to takeout, some Texas Roadhouse stores also set up tents in their parking lots for outdoor dining. Doster says a few locations even had more tables in their tents than they did in their dining rooms—a boon for workers, who Doster notes have been tipped generously by guests during the pandemic.

Meanwhile, during supply chain interruptions, other store leaders used their distribution capabilities to open farmers markets to sell produce, toilet paper, paper towels, and even raw steaks or drinks to consumers who were unable to find such supplies in local grocery stores.

“We’re based in Louisville, Kentucky, but we have stores all over the world,” Doster says. “Kent often says ‘I’m not going to sit here in Louisville telling people how to run their businesses.’ We have smart, hardworking operators, so we gave them freedom to figure this out for themselves, while supporting them with the resources they needed to do the job. Then we took the best ideas and shared them with other stores to help make each location successful.”

Now, as the world turns its attention to vaccination and a post-COVID future, the Texas Roadhouse team plans to take some of the lessons learned in the past year with the company into the future. First, Doster says he expects the brand’s rapid transformation over the past few months, particularly regarding off-premises dining, to serve as proof of what can be accomplished in a short time.

“It’s amazing how much has changed in just nine months,” Doster says. “Normally if we were doing something like adding partitions to booths, we would have tested the idea out at four or five restaurants and then rolled them out to other stores eight or nine months later. But COVID has compressed that timeline, and I hope we’ll keep operating at this speed.”

So far, the brand is continuing at this quickened pace. Doster notes that one restaurant just installed a drive-thru window, a first for the 27-year-old sit-down chain, and it’s already added a new “sanitation coordinator” position at each restaurant. Texas Roadhouse plans to continue examining how labor is divided at stores, shifting more workers into to-go services. Notably, Doster says the brand will also add a “to-go coordinator” as a new position in stores, while some locations may explore adding permanent outdoor dining options, such as patios, or carry out alcoholic beverage orders depending on local regulations.

Yet Doster says no matter what the next year looks like for Texas Roadhouse, he’s certain the one element of the brand that won’t change is its commitment to supporting employees.

“One of our managing partners said it best: ‘Hospitality is our job, but serving others should be our passion’,” Doster says. “We’ve always been a people-focused company, and we’ve always talked a lot about partnerships, but I think throughout this year, our employees saw us fighting for them, and I think it made a real difference in their lives, just as they’ve made a real difference at Texas Roadhouse.