Olive Garden remains the leader in the full-service Italian realm.

Taking the Pulse of the Italian Restaurant Icons

Three players dominate the Italian category in the U.S. Here’s what you can learn from their playbooks—and their missteps.
January 2019 Nicole Duncan

When it comes to the Italian category, three major chains dominate the headlines. Ranging from family-friendly casual all the way to upscale, these restaurants boast wider reach than independents, but with that size comes less dexterity.

Not only are these public brands held accountable to shareholders, but they also require more time and resources to make even the smallest adjustment. In some cases the investment pays off, but in others it leaves a major player floundering. Harder still: Changing the court of public opinion. No amount of new menu items or deep discounting can do that—at least not immediately.

For the big three, success and failure are tied less to flashy promos and rooted more in the core mission of each concept. In some cases, the struggles of these brands present an opportunity for small- to mid-size competitors. Similarly, independents stand to learn a trick or two from the category goliaths. 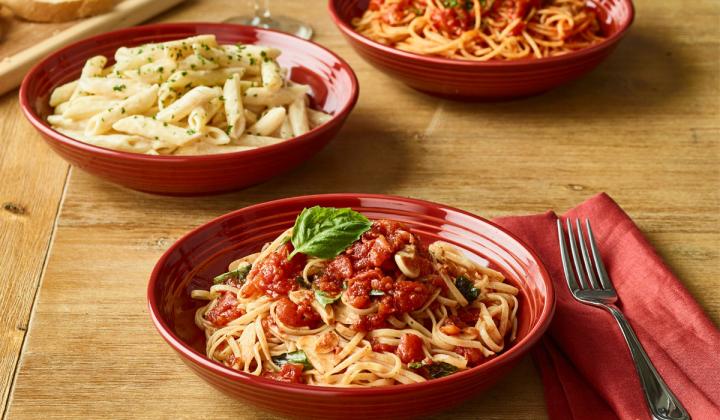 Carrabba's atmosphere skews casual, but the prices fall somewhere in between casual and upscale.

Carrabba’s: Caught between casual and upscale

At present, Bloomin’ Brands’ Italian restaurant is struggling to maintain market share. In November, the company’s third-quarter earnings call revealed that Carrabba’s comp sales had fallen 0.6 percent for the second quarter in a row. That was, at the very least, a less dramatic decline from one year earlier when the figures had slid 2.8 percent.

Arguably, Bloomin’ Brands has given more of its attention—and resources—to higher-achieving sister concept Outback Steakhouse, thus putting Carrabba’s at a disadvantage—and opening the door to outside criticism.

In fact, an open letter from Barington Capital last August called for Bloomin’ Brands to divest Carrabba’s (along with Bonefish Grill and Fleming’s) so the C-suite could double down on Outback. “It is our belief that a more focused management team would perform substantially better and do a more effective job of enhancing the guest experience to improve customer loyalty and increase revenues,” the letter stated.

It was a bold move, especially considering Barington owns less than 1 percent of company shares.

Within the same day, CEO Liz Smith replied in kind with a statement championing the company’s progress and pointing to consecutive quarters of sales growth for Outback.

Nevertheless, it’s a long, uphill battle for Carrabba’s as the chain finds itself in a gray zone. The atmosphere skews casual, but the prices fall somewhere in between casual and upscale.

The inverse combination of fancier ambiance and lower costs is winning many consumer hearts—just look at the fast-casual boom. Smaller and nimbler concepts, particularly those with local clout and community ties may have a better chance pulling off steeper prices and casual dining than a national chain. 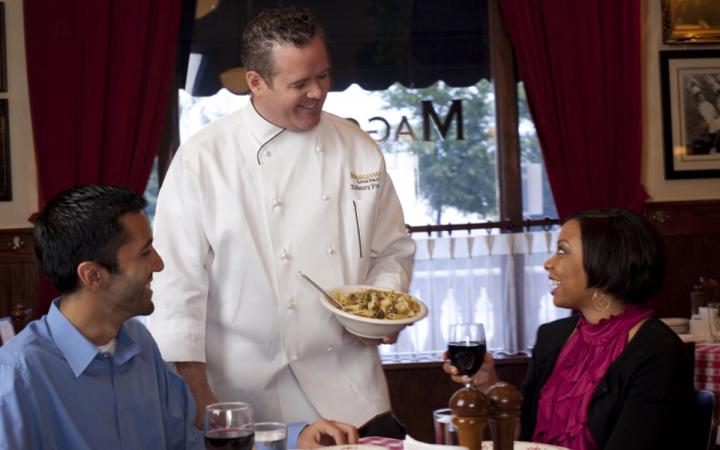 At just over 50 units, Maggiano’s is relatively petite in scale, and that could work to its favor.
“Our focus right now with some of these big partners is it to say, ‘If you're going to partner with us, you've got to give us an operational model that works, and you have to start thinking about how you integrate with us.’”— Brinker CEO Wyman Roberts.

A step above Carrabba’s, Maggiano’s Little Italy may lean toward more expensive dishes, but its elevated atmosphere and emphasis on fine-dining-level service imbue it with a certain cachet (its website even gives a short bio and shout-out to the head chef of each location).

Red-checkered tablecloths and warm lighting evoke that classic vibe that so many consumers associate with Italian dining. The Brinker International concept might price out guests as an everyday option, but it does win at special occasions, attracting families and large groups thanks to an expansive store footprint and a menu that routinely nixes the veto vote. Maggiano’s has been regularly lauded for making accommodations for special diets and was even named the No. 1 most allergy-friendly large chain by AllergyEats last year.

Despite these factors in its favor, Maggiano’s, like Carrabba’s, has been overshadowed as of late by another concept in the same umbrella group. Given the breadth of its system (more than 1,600 locations), Chili’s is often Brinker International’s primary focus. Two quarters of positive foot traffic and comp sales have investors heartened but also leave Maggiano’s somewhat untended. In the most recent earnings call, Brinker reported that both foot traffic and same-store sales were flat—although it did manage to eke out a 20 percent boost in to-go sales following its new double-your-portion carryout program. "Our guests told us they value the abundance Maggiano's offers—whether that is dining in restaurant, at home, or creating a special occasion of their own outside the restaurant,” chief concept officer Larry Konecny said in a statement.

Brinker hasn’t completely warmed to third-party delivery, but it does stand to boost business for both its concepts through off-premises options. “Our focus right now with some of these big partners is to say, ‘If you're going to partner with us, you've got to give us an operational model that works, and you have to start thinking about how you integrate with us,’” said Brinker CEO Wyman Roberts during the earnings call. “And I think that's important.”

At just over 50 units, Maggiano’s is relatively petite in scale, and that could work to its favor. More ubiquitous chains like Carrabba’s and Olive Garden (at roughly 250 and 850, respectively) lack the novelty of Maggiano’s. In smaller markets, it stands to become one of the go-to destinations for guests seeking something closer to a fine-dining experience, but still within budget.

Far and away the largest Italian chain, Olive Garden has faced its pitfalls in recent decades, but its wide-reaching appeal has thus far endured and adapted amid shifting consumer preferences and market pressures. Whereas Maggiano’s and Carrabba’s can be overshadowed by their sister restaurants, Olive Garden is the crown jewel of Darden, leading the charge for other concepts like Longhorn Steakhouse, Cheddar’s, and Yard House.

Part of Olive Garden’s success can be attributed to the same factors that drive fast-food chains: market penetration, family-friendly food and environment, and a (relatively) low cost barrier. Last month, the concept posted its 17th consecutive of positive comp sales. Traffic slipped but not to the detriment of sales; Olive Garden has the luxury of sporadically discontinuing its promotions. Instead of attracting deal hunters, the chain has cultivated an established base of loyal, value-driven guests.

“What we’re really focused on is building a really healthy guest base and trying to ensure that we create some opportunity in the future, if need be, to put back some of these incentives into the business,” CEO Gene Lee said during the earnings call.