Squeezed by Labor, Texas Roadhouse Won't Change What it Stands For

The 540-unit steakhouse is driving traffic and sales into its restaurants—proof its long-term plan has staying power.
July 2018 Danny Klein

Texas Roadhouse has battled labor inflation for some time now. That’s not an uncommon thread throughout the industry, especially as unemployment continues to drop and the market tightens. Brands have lifted prices, or turned to technology, like kiosks and tablets, to lessen the burden in many cases. But Texas Roadhouse isn’t your average restaurant company.

Texas Roadhouse is No. 1 in customer satisfaction, study says.

How Texas Roadhouse built one of the world’s best restaurant chains.

However, Texas Roadhouse saw its stock fall more than 9 percent in the extended session Monday after missing Wall Street’s expected top- and bottom-line forecast. Its net income of $44.2 million, or 62 cents per share, missed the 68 cents call by FactSet. Revenue of $629.2 million, up from $566.3 million in the year-ago period, was short of the $634.5 million estimate. Consensus estimates also called for 6.3 percent same-store sales gains.

Restaurant margin fell 76 basis points, year-over-year, to 18.7 percent of sales thanks to higher labor costs, in Q2. Labor as a percentage of total sales upped 93 basis points to 32 percent and labor dollars per store week were up 7.5 percent compared to the prior-year period. The culprits: wage and other inflation of about 4.3 percent, as well as Texas Roadhouse’s decision to increase managing partner base pay and growth in hours of about 3.2 percent, chief financial officer Tonya Robinson said in a July 30 conference call.

Scott Colosi, Texas Roadhouse president, said the traffic and comps growth validates the company’s decision to keep menu prices low and invest in labor, despite the margin stress. “However, in the short term, these decisions are tough on both restaurant margins and restaurant margin dollars per store week,” Colosi said in the call. “Ultimately, providing a legendary experience to our guests and not taking anything for granted will always be our No. 1 focus because we know it is the key to long-term growth.”

"We've kind of been down this road before. But we're going to keep pushing ahead on legendary food and legendary service like we've always done, keep asking ourselves what can we do that's smart with regards to managing labor and food costs and other operating expenses, and leverage our purchasing power wherever we can.” — Scott Colosi, Texas Roadhouse president. 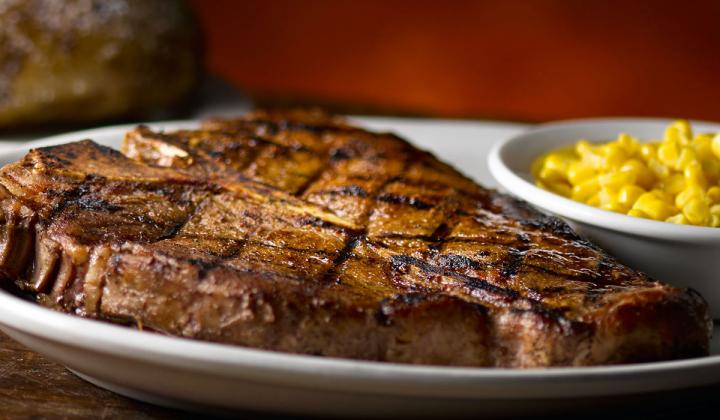 Restaurant margin fell 76 basis points, year-over-year, to 18.7 percent of sales thanks to higher labor costs in the second quarter.

As for things like menu pricing and off-premises, CEO and founder Kent Taylor said Texas Roadhouse can look back four years and see it’s up 22 percent versus some of its competitors, and that’s after doing things “the old-fashioned way, primarily.”

The traffic arrow supports that. Also, Texas Roadhouse is appreciating average-unit volumes north of $5 million and wants to get to $6 million. It’s simply going to take staff to get there, Taylor said. “We feel like we're pretty focused and doing a lot of the right things to keep our guests coming back and bring more guests in the door,” Colosi added. “So we're paying attention to the different trends in the industry, I'll tell you that. But in some ways, we've seen some of these things before, which seem to work pretty well in the short term and then maybe don't work so well in the long term.”

The company typically meets every fall and sits down with its market partners, reevaluates pricing as it looks to November/December and then makes the call. The pricing in Q2 ran about 1.3 percent, with 0.8 percent taking at the end of March and 0.3 percent in mid-December of 2017. Another 0.5 points rolled off in May.

Colosi said, following a bit of a downturn during the Great Recession, dollars per store week and profit-sharing have been “straight up” for Texas Roadhouse’s operators. “They also recognize a lot of that is supported by the great value that we have on the plate, of which pricing is a big part of that. So they are pretty protective, and they do think pretty long term,” he said. “And many of them are big believers that they'll gladly take on that challenge of driving more traffic to help offset whether it's inflation or investments in any particular line item. They're just as much of a party to keeping prices aggressive as any of us are in the room here.”

Now, whether this changes over time is a different topic. Colosi said it would be interesting to see in states where minimum wage is rising rapidly whether those operators will request higher price increases. “And I wouldn't be surprised if we took prices up a little bit. We have historically in some of those states where minimum wage went up quite a bit. So we'll see how that all shakes out, but just like we do at the more senior level, our operators, they also think very, very long term and are pretty patient.”

It’s been an evolving conversation for Texas Roadhouse following a few years of pretty significant food cost deflation, which in turn helped Texas Roadhouse ease labor inflation. Yet this year that food deflation isn’t part of the picture, and margins have felt the pressure. Over the years, Colosi said margins have bounced around a bit, averaging around 18 percent, and “that’s a good place for us,” he said. “Yes, we don’t get too bent out of shape if it falls a little bit. Nor do we want it to get too high just because maybe our prices are getting ahead of us, if you will, on the value side. So we keep watching. Obviously, there's a difference between labor and food, meaning, labor is much less cyclical. Labor generally more permanent, wage rates go up. They generally don't come down. Whereas food goes up and down. So the labor is a bit more concerning and a bit more challenging for us longer term. But we’ve dealt with it before.”

Colosi compared the climate to 2007 when federal minimum wage lifted from $5.15 to $7.25. Tip wage also hiked in some states.

"So it's again one of those things where it's a marathon, not a sprint for us. And we're going to focus on what's the right long-term decision for the business. And if it goes into next year or after that, so be it. We're going to keep at it." — Kent Taylor, Texas Roadhouse CEO.

“We've kind of been down this road before,” he said. “But we're going to keep pushing ahead on legendary food and legendary service like we've always done, keep asking ourselves what can we do that's smart with regards to managing labor and food costs and other operating expenses, and leverage our purchasing power wherever we can.”

Texas Roadhouse is building toward getting its shift and kitchen manager turnover rates into the single digits as well. As the brand grows and adds traffic into its restaurants, Colosi said those jobs are getting bigger and tougher than ever.

“Those folks, just like managing partners, anybody else, they're fighting hard for us. And so they're a very, very important part of our business. And not a meeting goes by where we don't talk about those positions,” he said, adding that hourly turnover has ticked up a bit, albeit at a slower rate than what it had been previously.

Texas Roadhouse has added staff while others have cut, and hopes to see the benefit show in time, particularly in the front of the house. Taylor said this is a necessary step for the chain as restaurants compete for employees with benefit packages and other incentives. “Certainly, we continue to challenge ourselves on compensations,” Taylor said. “And also if you're a longtime kitchen manager, service manager, what other opportunities do you have in our company for developing your career and whatnot, because we've got some that have been around for quite a long time.”

He said the staffing level changes would take time to mature from a sales perspective.

“You're giving [employees] more flexibility in their schedule, which is a big benefit when you do staff up. Of course, at the same time, when you staff up, you can maybe have higher standards on certain things that you're asking for from your employees,” Taylor added. “So sometimes you may have a little bit higher turnover in the short term simply because you're toeing the line more on your standards, and getting lower turnover in the longer term. So it's again one of those things where it's a marathon, not a sprint for us. And we're going to focus on what's the right long-term decision for the business. And if it goes into next year or after that, so be it. We're going to keep at it.”

Texas Roadhouse has opened 14 company restaurants so far this year, and has an additional 14 under construction. The company expects to open 30 corporate stores next year.