To mitigate labor pressures, the brand is focusing on cross-training employees to fill multiple positions and leveraging its digital store, which allows customers to pay online.

One would be hard-pressed to find any restaurant not affected in some way by the ongoing labor crisis.

In a national survey of 2,500 operators, the National Restaurant Association found 84 percent have staffing levels below pre-pandemic levels, and 90 percent said recruiting and retaining employees will likely be more difficult after the pandemic is over than it was before it began. Because of this, more than half of full-service operators and 42 percent of quick-service operators said they are unable to open at maximum-allowed capacity.

The 664-unit Cracker Barrel certainly isn’t immune. CEO Sandy Cochran said Tuesday 10 percent of its footprint is designated as a “critical” situation and another 25 percent is labeled as “concerning." Combined, that's  roughly 230 stores broadly based across the country.

“What you're looking for is a number—I need ‘x’ number of employees,” Cochran said during the brand’s Q3 earnings call. “It’s not really the way we look at it. Basically, I'm not going to give you that number. We think of it more as which stores have critical needs as we look forward, and in particular, in certain skill codes.”

Cracker Barrel CEO: ‘Too Much Noise’ to Predict the Future

At Cracker Barrel, Guests are Coming Back and So are Sales

In response, Cracker Barrel implemented a number of initiatives to recruit talent. One is a big program to contact former employees, which would speed up the onboarding process. For some of the most challenged stores, the chain set up a “centralized staffing function” to supplement the work being done at the store level. In terms of retention, operators have utilized employee referral programs, competitive wages and benefits, guaranteed bonuses, shift meals and perks in the kitchen—anything to prove Cracker Barrel is an employer of choice.

To mitigate labor pressures, the brand is focusing on cross-training employees and leveraging its digital store, which allows customers to pay online. Cochran also mentioned a new food system and labor system that streamlines and simplifies the work managers do to run restaurants. Cracker Barrel is giving field leaders “a lot of latitude” in regard to how they manage the business with labor constraints, whether that’s closing front porch dining or even temporarily shutting down the dining room.

“What we have been really pleased with though is how in this very chaotic environment our field leaders are leading through it, and I think doing a good job of delivering the brand as this demand has ramped up,” Cochran said.

The CEO believes enhanced unemployment benefits is one of the factors contributing to the labor shortage. However, that may not be an issue for much longer. The benefits don’t expire until September 6, but as of Tuesday, 23 states said they will end the weekly $300 boost from the federal government as early as June 12 and as late as July 10. Among that group is big-time markets Florida and Texas. Although President Joe Biden doesn’t agree that unemployment benefits are causing the shortage, he did warn workers that they must accept a suitable job offer or lose their unemployment benefits. The White House also asked the Department of Labor to reemphasize unemployment guidelines and to push states to enforce “work search” mandates.

Cochran said the removal of those benefits will help with the flow of applications. But it won’t solve all of the chain’s problems.

“What we will still be facing is a lot of competition in the industry. Everybody's hiring at once in the restaurant industry as America opens up,” Cochran said. “But we've also got new competitors, if you will, for a lot of the similar skill sets. Companies like Amazon and the kind of employment increases they've got, all of that competition is going to continue, I believe, to impact wage inflation. So in some sense it will help, but it doesn't alleviate all the problem.” 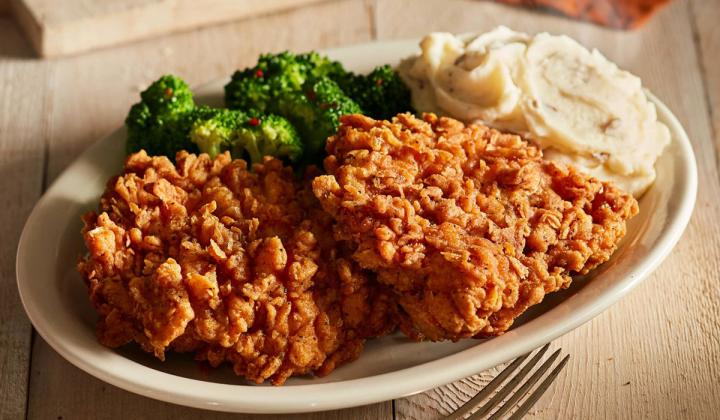 “In general, we are looking forward to families traveling this summer, and to people getting back to their normalized routines in terms of work, which we think will have a positive impact on our breakfast business,” Cracker Barrel CEO Sandy Cochran said.

As Cracker Barrel battles the labor shortage, same-store sales declined 3.1 percent in April compared to 2019, after dropping 8.5 percent in March and 16.2 percent in February. Cochran said through May, the chain’s performance has been choppy. It began with a strong performance on Mother’s Day—both dine-in and off-premises—but sales softened the past few weeks. Cracker Barrel believes some of that is related to the shift of Memorial Day to later in the month and the Colonial Pipeline’s impact on traveling.

Meanwhile, other casual-dining brands such as Applebee’s, Texas Roadhouse, and Outback have seen positive comps through April. Cochran attributed Cracker Barrel’s slower pace to the pressure on the breakfast daypart and the slow recovery in travel. But the CEO is optimistic that both of those will take a positive turn in the coming months.

“In general, we are looking forward to families traveling this summer, and to people getting back to their normalized routines in terms of work, which we think will have a positive impact on our breakfast business,” Cochran said.

Off-premises increased 144 percent compared to Q3 2019, and represented roughly 23 percent of sales. Within the off-premises program, 55 percent is takeout/curbside, 25 percent is delivery, and 20 percent is catering. In April, off-premises sales volumes actually outperformed the prior year when dining rooms were closed. Previously, Cochran said Cracker Barrel could retain at least 50 percent of the growth its seen in off-premises channels. Since making that statement, off-premises has performed so well that the brand is willing to update that guidance to at least 60 percent.

Adding an incremental boost will be Cracker Barrel’s virtual brand, Chicken 'n Biscuits. The company is expanding the test to 19 locations this week.

“We've been working on optimizing the menu and the offering for the Chicken 'n Biscuits brand, and gaining some operational learnings in the last couple of months,” said CMO Jennifer Tate. “ … We do believe Chicken 'n Biscuits has a simple, but winning combination, because it's very broadly appealing food—hand-battered, hand-breaded fried chicken and tenders, just our top-selling sides and scratch-made biscuits, combined with the fact that the menu is very streamlined, which enables us to deliver on guest expectations for speed. So because of that we think that this brand may launch in at least half of our system, pending the results of a test being successful.”

Another major sales initiative is the beer and wine program, which was in 405 stores at the end of Q3. Cracker Barrel expects the program to reach about 600 stores by the end of Q1 2022. Six of the past seven states that added beer and wine have lifted the mix. Markets like the Northeast and Texas are running mixes that are doubling the average of states that rolled it out earlier. Cracker Barrel’s is optimistic that beer and wine can reach 2 percent of dine-in sales.

For the fourth quarter, Cracker Barrel projects 5 percent commodity inflation and 3 percent to 3.5 percent wage inflation on a constant mix basis. The brand plans to take 3 percent pricing, but the chain said that won’t offset the high commodity and wage inflation environment. As the brand moves forward with its pricing strategy, Cochran said it’s important to keep a solid balance.

“We want to be very careful that we understand which of these pressures are short-term versus long, and being very mindful that our brand and our guest very much values value, and that we want to be careful about not disrupting our reputation and commitment to offering value on our menu,” Cochran said.

Maple Street, Cracker Barrel’s fast-casual growth driver, is seeing sales volumes remain well above 2019 levels. On an annualized basis, the chain’s Q3 performance would result in AUVs over $1 million. Cochran said the plan is to reach double-digit unit growth in 2022 through expansion in new and existing markets.