By year’s end, Ruth's Chris should also be about two-thirds of the way done with its 2.0 remodel program.

The steakhouse chain is targeting the East Coast.
May 2019 Danny Klein

Ruth’s Chris Steak House purchased development rights to “prized territory,” for about $19 million in cash, the company announced during its May 3 first-quarter review.

To date, there is one store in Philadelphia, on Market Street; two in New Jersey—Atlantic City and Princeton; and a lone Long Island restaurant in Garden City.

Here’s a look at the map and where the wide-open runway lies: 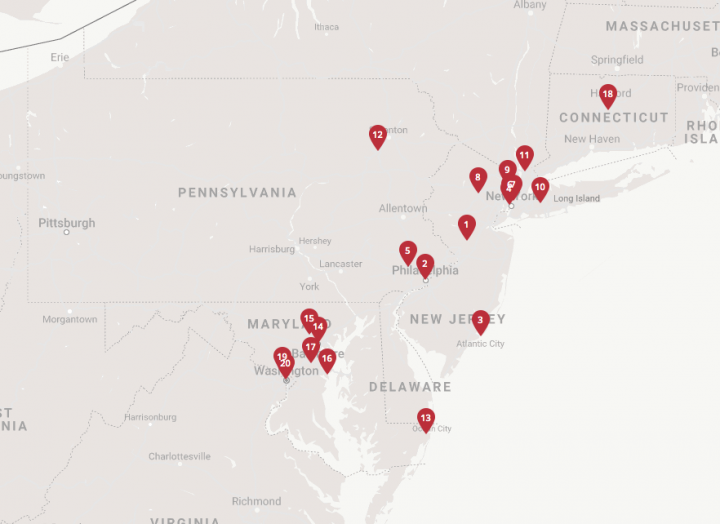 The three franchises Ruth’s Chris bought, located in Philadelphia and Long Island (the Garden City unit), generated revenues of roughly $15 million and contributed $790,000 to franchise revenue last year. Chief executive officer Cheryl Henry told investors during a conference call that the population equation measures up for Ruth’s Chris. The Long Island store, for instance, has a base of roughly 3 million people. “I think the opportunities are there,” she said. “It’s certainly part of why this acquisition is so unique for us, and thinking about our growth and solidifying our [next] three to five years.”

“We think there’s opportunities both in the existing restaurants and to grow and we're thrilled to,” added CFO Arne Haak. “… We’ve talked about this for some time. We’re glad that we can now do this.”

The 154-unit chain (78 corporate) historically doesn’t discuss development unless leases are signed and the ink is dry. There are currently four deals for company-run stores in Columbus, Ohio; Washington, D.C.; Somerville, Massachusetts; and Oklahoma City. The first three are expected to open in the second half of 2019. The OKC unit is slated for 2020. A franchised location is also on deck for St. George, Utah, in the first half of next year.

“I think that actually what’s equally interesting about these different territories that we’re acquiring is that when you think about our ability to go into smaller markets, smaller areas, and larger ones, and be equally successful based on rent, etc.—there’s some good opportunity for us here.”

The company has tracked mostly positive results since Henry was promoted to the position in August 2018 from COO. Henry, who joined Ruth’s Chris in June 2007, replaced Michael P. O’Donnell.

The quarter prior to Henry’s promotion—Q1 of 2018—company-run same-store sales declined 1.1 percent, year-over-year.

Traffic was flat in the quarter. Average check increased 1.8 percent and comps and transactions took a 200-basis points benefit from the shift of the New Year’s Eve holiday into the quarter. There was also a 90-basis points hit from Easter moving into Q2 this year.

Additionally, Ruth’s Chris saw food and beverage costs, as a percentage of restaurant sales, decrease 30 basis points to 28.2 percent thanks to a 3.7 percent drop in total beef costs.

The recent operator-store deal won’t be the last for Ruth’s Chris, Henry said. She said the company would “continue to grow our footprint through the opportunistic acquisition of franchisees.”

By year’s end, the company should also be about two-thirds of the way done with its 2.0 remodel program (eight are scheduled for this year). Ruth’s Chris’ store investments aren’t designed to simply refresh the brand. They target expansion of sales channels. Mainly, the company wants to make its bar and private-dining footprint larger where it can.

“It was really to align the offerings and the experience with the footprint and what the restaurant can deliver, and atmosphere itself,” Henry said.

This includes, as noted before, expanding bar and private-dining sections; working on Ruth’s Chris’ main dining area to enhance atmosphere; and then examining the menu and seeing where the chain can improve.

“We continue to work it as we think about evolving in the future,” Henry said. “I would say it will be more around the guest experience and how we use technology to do things like reduce friction and enhance the guest experience. And that's still some of those efforts are still to come.”