Free bread and peanuts. It's the Texas Roadhouse way.

Report: Texas Roadhouse is No. 1 in Customer Satisfaction

The sizzling brand scored big with guests this past year.
June 2018 Danny Klein

Given Texas Roadhouse’s sizzling sales of late, it’s no surprise to see the 558-unit chain scoring big with guests on this year’s American Customer Satisfaction Index. Texas Roadhouse notched an 83 (out of 100) to lead all full-service brands studied in the annual report. More than 22,500 customers were chosen at random and contacted for the study, which also ranks quick-service brands. Check out where fast-food chains ranked here.

ACSI asks consumers to evaluate their recent experiences with the largest brands in terms of market share, plus an aggregate category consisting of “all other or smaller” restaurants. From there, the data goes into ACSI’s cause-and-effect econometric model, which estimates customer satisfaction as the result of the survey-measured inputs of customer expectations, perceptions of quality, and perceptions of value. The ACSI model, in turn, links customer satisfaction with the survey-measured outcomes of customer complaints and customer loyalty.

READ MORE: How Texas Roadhouse built one of the world’s best restaurant chains.

Texas Roadhouse’s strong run even resulted in the brand boosting its annual managing partner pay by about 10 percent, the first time it has done so since 1993. Looking at the end of fiscal 2017, for five-year compounded-annual growth rate, total revenues rose 2.1 percent. Operating income 11 percent to $186.2 million. Net income 13.1 percent to $131.5 million. AUVs have climbed 3.9 percent. In fact, across the board, from diluted earnings per share (13.1 percent) to average restaurant gross square feet (0.4 percent) to average sales per square foot (3.8 percent), there isn't a negative drop to be found.

Texas Roadhouse, which went public in 2004, has often credited its financial stability to its menu, customer service, and operational stability. “We focus on what we can control, and you know, a lot of people seem to not understand that,” CEO Kent Taylor told FSR in April. For example, Texas Roadhouse’s No. 1 selling item, its 6-ounce sirloin, has been its top-ticket draw for 25 straight years. Other than a bar revamp, the design prototype has mostly stayed the same since George Lask and Taylor built one in Louisville, Kentucky, in 1996. And from warm plates to line dancing to cold salad bowls, free bread and peanuts, Texas Roadhouse knows what its customers crave and sticks to it.

“So all of this stuff just kind of bubbles up and I think that’s one of the things that’s attractive about working with us,” Travis Doster, the company’s senior director of communications. “Kent always says happy employees make happy guests make happy accountants.”

Here were the rest of the rankings: 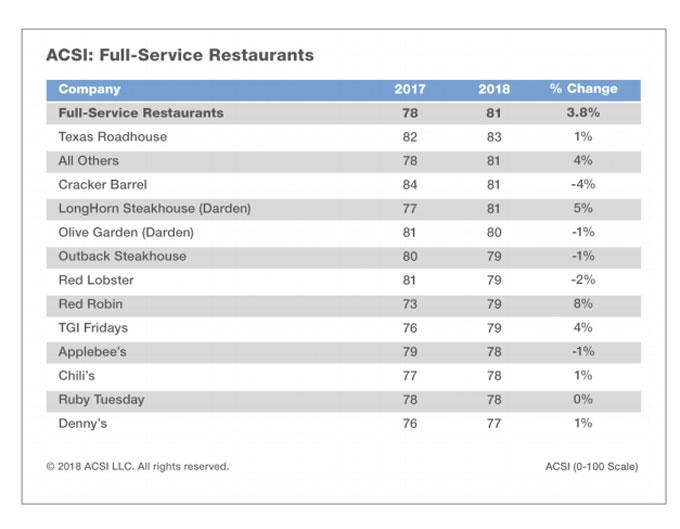 Red Robin was the biggest gainer this year, up an impressive 8 percent to 79. Menu innovation and investments in off-premises appear to be paying off. Off-premises sales increased 40 percent, year-over-year, in the first quarter. It averaged 9.4 percent of sales mix in Q1 as Red Robin looks to hit double-digits in the near future. Third-party delivery is also live in about 70 percent of Red Robin stores

ACSI’s data showed improvement across the customer experience, from beverage and food quality to staff courtesy and service speed.

Same-store sales fell 0.9 percent, year-over-year, in the first quarter, and total revenues reported $421.5 million—an increase of 0.2 percent. Red Robin’s comps fell despite traffic climbing 0.1 percent. The reason being that average guest check declined 1 percent—an outlier across the industry, both in full and limited service: Black Box data showed a 3 percent average check hike this past quarter. But there was a reason.

“We've gained 400 basis points of relative affordability versus the rest of the space, which we think actually strengthens our position as an affordable alternative for the families or the people that will frequent our business in the future,” Guy Constant, chief financial officer of the 571-unit burger chain, said in a May 22 conference call.

Another significant jumper this year was Darden’s LongHorn Steakhouse, which gained 5 percent. LongHorn has followed suit with Darden’s “brilliant with the basics” operating strategy that proved so successful with Olive Garden. LongHorn has trimmed its menu about 30 percent in an effort to bolster execution and simplify operations. LongHorn, which Darden CEO Gene Lee recently said would be headed to California in the next 24 months, reported same-store sales of 2.4 percent in the fourth quarter, and 2.7 percent for the year.

TGI Fridays, which is undergoing a menu overhaul, rose 4 percent to 79. 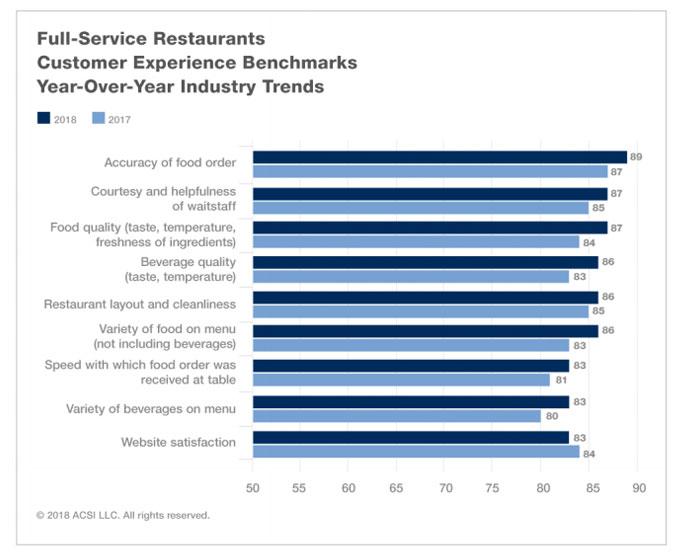 As a whole, it was a solid year for full-service brands in consumers’ eyes. Brands improved across nearly all aspects of the customer experience. Food order accuracy upped 2 percent to 89. Restaurant staff is more courteous and helpful boosted 2 percent to 87. The study said millennials preference toward healthier options and customization led to restaurants increase food quality (4 percent lift to 87) and variety (also up 4 percent to 86). Beverage quality (86) and variety (83) improved as well.

Restaurant layout and cleanliness rates at 86 outpaced quick service (84). Speed of service also hiked 2 percent to 83, although it’s behind quick-serves (84).

“This may warrant attention as online ordering continues to gain traction with customers and off-premise dining becomes more critical for boosting sales,” the study said.