The legacy brand has a fresh look, leadership team, and focus on the future.
June 2019 Danny Klein

Even before Bill Freeman joined Shula’s Restaurant Group in an official capacity, he was cultivating a vision. It started with unpacking and assessing the 30-year-old company, category by category, and concept by concept. “Really looking,” he says, “at how do you bring a focus to Shula’s by, in this case, consolidating some of the brands we had out there. Turn it into a more focused, category-driven portfolio.”

Over the three decades, Shula’s had spread out from a fine-dining steakhouse, founded in 1989 by legendary Miami Dolphins coach Don Shula, to six concepts that dipped into multiple segments and occasions, including the fast-casual Shula Burger. It eventually became clear, however, that Shula’s personality split too many ways. It was difficult to serve any one audience when multiple groups battled for a seat at the table.

“Ultimately, we needed to create a set of parameters or DNA that said, this is who we are. This is who we look like. This is who we connect with,” Freeman says. “And that then drives all of the decisions you make for the concept as you look to the future, and look to creating relevancy in each of these concepts.”

Freeman, who previously led celebrity-chef owned MINA Group and was CEO of Bertucci’s and McCormick & Schmick’s, as well as Fox Sports Grill and Sundance Entertainment, took over the same role at Shula’s in March 2018. The following January, the company officially unveiled a revamped team that included Shardul Kiri, the VP of marketing at MINA Group, as chief brand and marketing officer; and Demetrio Zavala, a fine-dining trained chef with multiple Food Network credits, as corporate culinary director.

Freeman’s first directive was to take Shula’s six-concept portfolio and trim it to three. The company is now focused on operating and growing its legacy steakhouse, known for “Shula Cut” premium Black Angus Beef, the more casual Shula’s 347 Grill, and Shula Burger.

Shula’s 2 is being consolidated into the 347 model. Shula’s Bar & Grill will stick to the non-traditional space with airport locations.

Freeman says Shula’s lacked continuity with the old structure. It stymied the company’s evolution. Shula’s was developing concepts individually instead of collectively.

“The consolidation creates focus on where we would put [a restaurant] and who we would partner with on it,” Freeman says. “Compared to just saying, ‘we’ll take each individual opportunity and assess it.’” 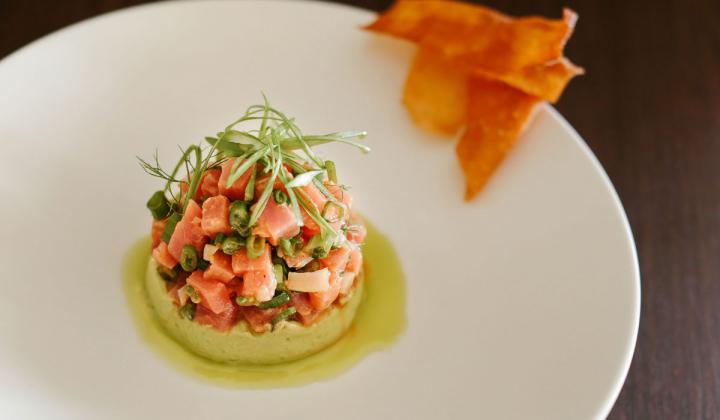 This was really only the opening act for Shula’s new team, though. One of the intriguing parts of the opportunity, Freeman says, was the legacy, foundation, history, and underlying culture of a brand with three decades of equity. And not just the restaurant, but also Don Shula’s Hall of Fame career. His 1972 Dolphins remain the only NFL team to go undefeated.

But here was the concern: Was that fanbase aging out a bit?

Kiri says the answer lies in a middle ground of sorts. While some guests might be unfamiliar with Shula’s coaching career and league-record 347 wins, or just not be football fanatics, they can still benefit from what he stood for and how that applies to a restaurant setting.

“This is an opportunity to take a brand that’s very well respected within the communities that it’s in still, but help really reshape that language a bit to make us more current and relevant from where we are today,” says Kiri, who previously developed campaigns for Old Navy and Expedia.com.

So how do you market that? For Shula’s, it started with the physical space.

In May, Shula’s refreshed its flagship location at Orlando’s Walt Disney World Swan and Dolphin Resort. It was the first store to reflect Shula’s new identity and will serve as a model for the chain’s seven other Shula’s Steak Houses.

The company engaged Florida-based design firm Temper to develop an aesthetic that pays homage to Shula, yet also introduces him to younger guests in a relatable way. But perhaps the biggest shift: create a space that shines the spotlight on the restaurant experience itself. 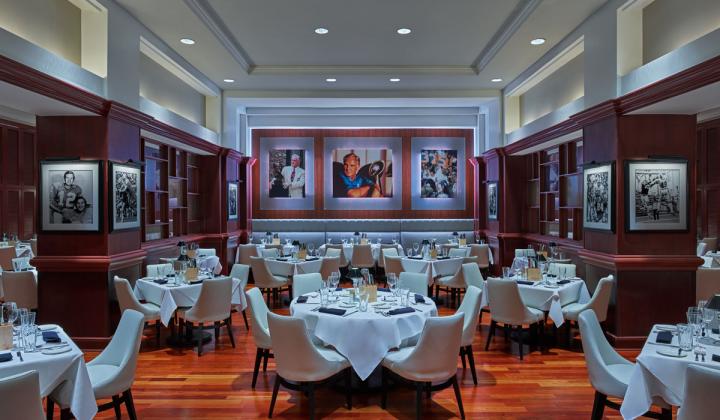 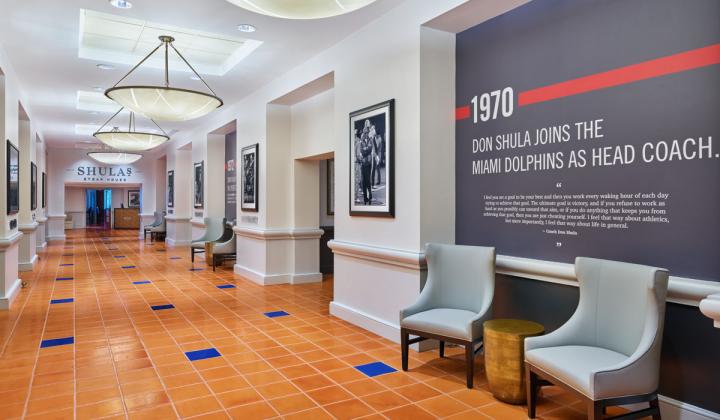 A timeline feature helps introduce guests to Don Shula's career. Once inside, the food and bar takes center stage.

The back wall was updated to highlight three stages of Shula’s career—the 347-win mark, his first Super Bowl to cap off the undefeated run, and Shula’s induction into the Hall of Fame. There are three framed, large-format images, and the hallway features inset wall spaces showcasing a timeline of Shula’s career.

“If they’re interested they can learn why the name Shula exists on the door and why that’s relevant for them,” Kiri says of the feature. “But then once they’re in that dining room, they’re now in the restaurant. They’re having that experience and it’s not about seeing an environment that’s all about football.”

Shula’s expanded the bar and lounge space, which now features a three-sided wraparound that encourages socialization. There’s also a wine tower to highlight the company’s program.

Freeman says the design is meant to reflect the next iteration of Shula’s—a version of the restaurant that leverages its founder’s legacy more as inspiration than literal manifestation. “You take all of it,” Freeman says of Shula’s accomplishments, “and you wrap that story and connection to who he is and why that’s still relevant to us as a company. You consolidate it more into some type of entry-level experience that allows people to make that connection and understand it. But then you put the food and bar forward and let the dining experience [take center stage].”

Menu, growth, and the lure of fine dining

Beyond the décor changes, Shula’s faced some of the hurdles you’d expect for a legacy brand. Certain service and culinary elements simply age better than others. This is especially true, traditionally speaking, for a classic steakhouse. How can you stick to the playbook consumers expect but also write one every velvet-booth brand in America isn’t following?

Zavala, who some might recognize from the hit series “Chopped,” and “Beat Bobby Flay,” says Shula’s wanted to, figuratively, remove some weight from its menu. “Our new approach takes the standpoint that just because you’re eating steak, doesn’t mean the meal has to feel heavy—so we’re looking for lighter alternatives to complement the steaks,” he says. 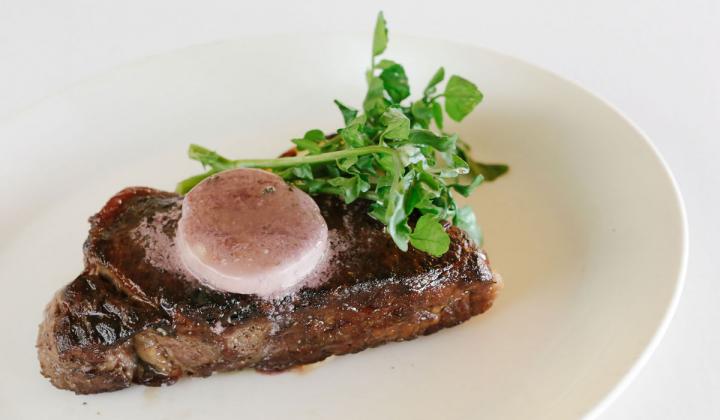 Shula’s eliminated traditional ingredients, like flour, in some dishes and introduced plant-based alternatives, such as seaweed powder, as a thickener as opposed to a typical roux.

It’s always a balancing act. “We definitely tried to leave the signature dishes that our guests absolutely loved but updated them with a modern approach. We are using a lot of the same favor profiles but with different nuances and updated presentation,” Zavala says.

One example is Shula’s hashbrowns. An old feature, Zavala layered the shredded potato with caramelized onions, lemon zest, and thyme to create a complex, modern version.

Steak remains the headliner. Zavala highlights a 45-day dry aged cowboy cut, as well as the NY Strip, which can be joined by a new red win shallot sauce and truffle black pepper parmigiana butter.

The “Shula Cut” refers to hand-selected steaks picked based on 10 science-based specifications in marbling, maturity, uniformity, flavor, appearance, consistency, and tenderness, and aged for an average of 28 days. Shula’s says less than 1 percent of all beef sold in America qualifies for this standard.

Freeman believes there’s whitespace in the steakhouse category to capitalize on industry trends. A more confident consumer has raised the bar for restaurants. There just isn’t as much space in the gaps between experience and convenience. It’s one reason fine dining steadied during a transformative period. Based on same-store sales growth, it was the top-performing segment across the industry in the first quarter of 2019, according to industry tracker TDn2K.

Basically, saturation squeezed the industry, especially fast casual, and led to an environment where brands need defined personalities and experiences to thrive. It signaled the end of the “all things to all people,” direction in casual dining and brought on a fresh wave of value wars in quick service. For fine dining? Headwinds played into restaurants’ strengths—to offer an experience that goes beyond refueling. It’s almost like a more cost-effective and social version of a vacation, which is an especially appealing target for millennials. 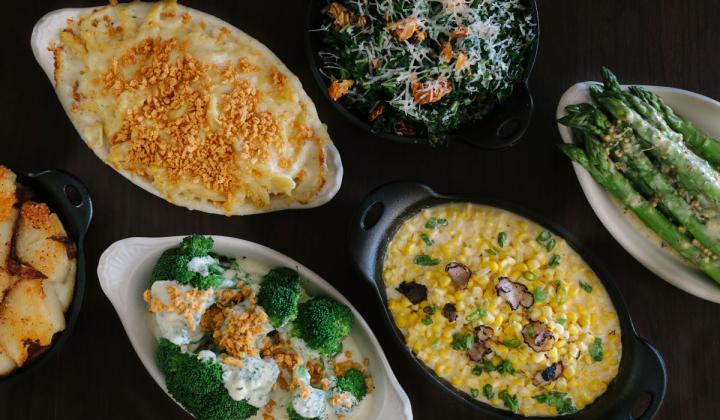 “For us, we feel like putting more energy around the dining room experience, the bar experience, and letting that be the focus for us as a restaurant company is right in line with what the consumer is looking for today,” Freeman says. “It’s the ability to be able to get away from the speed and efficiency of fast casual and casual, and let there be something that’s an elevated experience—one that’s focused on service, hospitality, unique flavor profiles and things that people can’t make at home or get on a to-go menu.”

Heading into the future, Freeman says, there’s still an active, internal target for growth at Shula’s. The fast casual remains an opportunistic outlet, but Shula’s will put its force and operational expertise behind fine dining and polished casual. There are currently 28 units and Freeman says they’ll take a conservative approach to opening new restaurants.

“Anything we build moving forward will be under a new dynamic that really sets that stage for the future,” Freeman says, “based on what we believe the DNA of those concepts [347 Grille and Shula’s Steak House] revolves around.”

All of the locations are currently franchised or licensed. Freeman says that could change in time.

Additionally, the two concepts offer Shula’s flexibility to fit real estate to its brands, not the other way around. The steakhouse seeks a more affluent, income-savvy market, with a heavy influx of business diners. The 347 Grille spot has the option to be “everyone’s Tuesday night dinner,” Kiri says.

“Being here over a year and looking at our growth our evolution so far, we’re excited about the path that we’re on,” Freeman says. “It’s a process that we want to be thoughtful about and be respectful and not try to rush through.”

“And so at the end of the day we made great strides in the first year and we expect to make similar, if not greater strides in the year that we’re in right now,” he adds.