Off-premises boomed 37 percent this past quarter at Applebee's.

Applebee’s president John Cywinski perhaps said it best. “Upon reflection, our turnaround has happened a bit faster than some anticipated, and now we’re on a path of stability and predictability.”

He then offered a statistic that’s really quite staggering when you consider where the country’s largest casual-dining brand stood a year ago today, when Applebee’s saw its same-store sales fall 7.7 percent after a 6.2 percent and 7.9 percent drop to start the year.

As of this week, Applebee’s franchisees have delivered 43 consecutive weeks of positive sales this year. “And yes,” Cywinski said, “positive momentum continues here in October.”

READ MORE: IHOP is no longer just a breakfast destination.

And speaking of positive momentum, Applebee’s overhauled leadership continues to defy critics with industry-beating results. It’s been a little over a year since CEO Stephen Joyce, the former chief executive of Choice Hotels, joined Dine Brands in September 2017. And the 1,856-unit brand just posted same-store sales gains of 7.7 percent, year-over-year, in the third quarter—Applebee’s best sustained sales and traffic performance in at least 14 years.

As the graph below shows, the swing has been dramatic, to put it lightly. Given the fact the negative sales were so steep, it’s not overly surprising to see a wide gap emerge, but very few investors or outside analysts envisioned the seismic shift taking hold so quickly. And there was a point there late fiscal 2016 bleeding into mid-2017 where there was no serious indication that Applebee’s sales weren’t going to get worse. 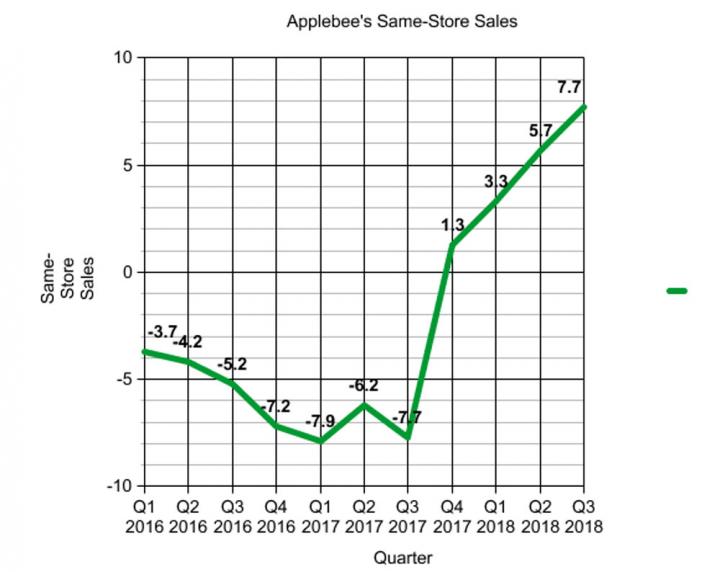 Of note, Applebee’s has posted sequential improvement in each of the past four quarters, giving it year-to-date comp sales of 5.5 percent. Cywinski said it was also important to point out that the majority of this sustained growth has come in the form of traffic.

Put simply: “This organic growth reflects the enhanced relevance, appeal, and health of the Applebee's brand,” he said.

The narrative around how Applebee’s rerouted its sliding business hasn’t been overly complex, and it’s been a consistent message throughout the last year.

“From a strategic perspective, Applebee's has returned to its roots. We have embraced our core DNA as the neighborhood place folks come to connect with family and friends, and we remain fixated on restaurant-level excellence and guest satisfaction is our top priority,” Cywinski said.

Back to its roots, but planting new ones, too

Sure, Applebee’s lost sight of its core guest. That misdirection proved nearly catastrophic, as you can see from the prior sales trends. But beyond the return to value (monthly drink deals and offers like the 3-course meal for $11 introduced in September) and focus on improved unit-level economics and franchisee profitability, Applebee’s has started to wield its significant leverage in some of the industry’s quickest-moving categories. This is why Joyce said there was “untapped potential” when he joined the company.

One of the biggest indicators is off-premises. Despite the headlines that Applebee’s was stodgy and outdated in its customer base, the brand discovered through analytics that millennials actually represent the largest segment of its diners at 30 percent—a significant over-index relative to casual dining as a whole, Cywinski said.

With Scott Gladstone, vice president of strategy, at the controls, Applebee’s boomed its off-premises business in the past calendar year. This quarter alone, it grew 37 percent, and now accounts for about 10 percent of the total sales mix.

The vast majority of the off-premises lift is credited to carryout and to-go orders. However, that might soon change. Applebee’s plans to offer delivery in nearly 1,000 restaurants by year’s end. With DoorDash as a national partner, Applebee’s is currently offering the service in about 500 restaurants. The catering business is also emerging. 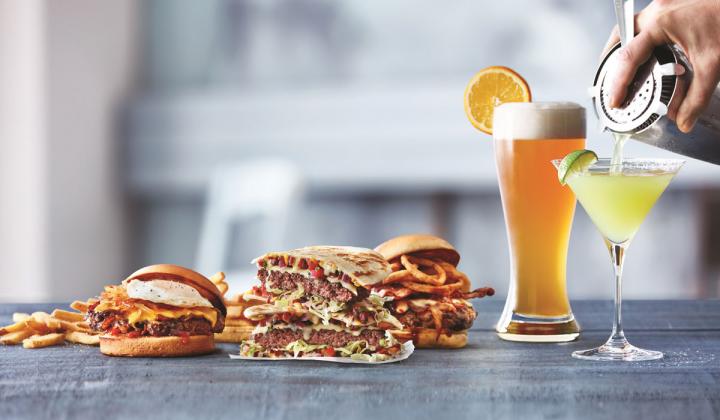 Beverage and menu value has been a staple of Applebee's, past and present.

“From my perspective, no brand is better positioned than Applebee's to capitalize on off-premises demand as we fully expect our off-premise business to double from 10 to 20 percent of total sales over the next few years,” Cywinski said.

“It's reasonable to expect the doubling of the off-premise business at Applebee's within the next three to four years,” he added. “Our run rate is probably two to three times that growth rate of the [casual-dining] category at the moment, according to Black Box. So we're well positioned given our scale, our number of locations, our variety, our value positioning.”

Applebee’s is still in the process of shuttering “underperforming or brand-damaging restaurants.” Dine Brands expects to close between 80–90 domestic restaurants this year. Cywinski said they anticipate slowing this initiative significantly next year as it approaches a core base of about 1,690 U.S. restaurants. There are currently 33 franchise partners in the Applebee’s system. Twenty international restaurants are also expected to shutter. Twenty-eight franchises closed this past quarter.

Also with the goal of improving the overall health of the brand, Dine Brands signed an asset purchase agreement to acquire 69 Applebee’s restaurants located in the Carolinas from one franchisee. The company expects the transaction to close in Q4 and will operate the units with a goal of refranchising them under favorable terms, Joyce said.

As a whole (with IHOP included), Dine Brands reported Q3 net income of $23.6 million after swinging a loss in the same period a year ago.

If it feels like Applebee’s has pulsed far more menu promotions than usual lately, it’s been by design. Chef Stephen Bulgarelli joined the company in August 2017 after seven years with Chili’s. A couple recent innovations were the Neighborhood Pastas, starting at $11.99, and October Dollar Zombie drink, complete with gummy brains. The Neighborhood Pastas include a new signature breadstick and feature offerings like Chef Bulgarelli's Stuffed Rigatoni and Tomato Meat Sauce—Ricotta and Romano cheese-stuffed rigatoni tossed in a savory tomato-basil ground beef sauce with bruschetta tomatoes. Topped with Mozzarella and Parmesan cheeses then baked until light golden brown.

“We'll continue to enhance our very popular Eatin' Good In the Neighborhood positioning with creative, targeted, occasion-based and insight-driven marketing initiatives,” added Cywinski, who was actually responsible for Applebee’s Carside To-Go and “Eatin’ Good In The Neighborhood” initiatives when he served as Applebee’s CMO from 2001 through 2006 (he rejoined Applebee’s in March after a run as EVP of Brinker International).

“Under the leadership of CMO, Joel Yashinsky, these programs now have the benefit of an additional 4.25 percent national contribution rate, additional media muscle in the form of a 4.25 percent national contribution rate,” Cywinski said. Yashinsky is also a relatively new hire, having come on board in January from McDonald’s, where he most recently served as the marketing president of McDonald’s USA. 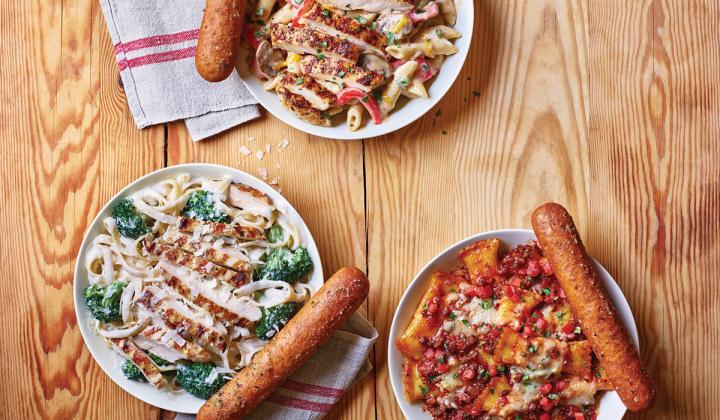 Applebee's Neighborhood Pastas show a commitment to menu innovation that isn't slowing down.

What about buying another brand?

Joyce has said on multiple occasions that Dine Brands is looking to add a third restaurant chain to its portfolio.

He addressed the notion during the call, saying the company is “very engaged in that.”

“We are currently in the process of evaluating lots of potential alternatives and we're beginning to have some dialogue. We don't have anything imminent to talk about, but our goal is to be able to add a brand within the next year to 18 months, and I'd say we're probably on track to do that,” he said.

Based on prior stories, it appears likely the brand will be a counter-service chain. Joyce previously told Bloomberg the company was targeting a founder-led brand with potential to hit 1,000 locations.

A look into the future

Joyce said Dine Brands is testing “several different programs that are going to do several things.”

The first goal is to reduce friction points with the consumers. Within a year, Joyce said they’d like to roll out initiatives like pay at the table, on a guest’s own device; tablets for servers; order-ahead capabilities where a customer places an order, comes to the restaurant, places their device on the table, and the order then launches to the kitchen. Then guests will be able to change the order or add to it, or pay on their own, on their own timetable, or engage with a server.

“So what we're trying to do is give the customer and the guests in the restaurant more optionality. Our folks love engaging with our servers. Our servers love engaging with our guests, and so I don't think that's going to change in a big way, but what we're going to do is give our customers more optionality,” he said. “In addition to that, we're using technology in the back of the house to reduce labor and to look at opportunities to save time and money.”