A bet is a bet. Red Robin CEO Denny Marie Post got a tattoo to honor the company's improved customer service scores.

In fashion, they call it the cold shoulder. Denny Marie Post, the CEO of casual-dining chain Red Robin, discovered this after some careful online searching. The idea is to leave the shoulders bare while covering your upper arms, a trend that was popular in the 1980s (think Flashdance) but is making a comeback. Post, who is 59, ordered four of them. It was simply the ideal fashion complement to her new burger tattoo.

“It had to be some place I could show it off,” Post says. “And I’m not a tramp-stamp kind of girl.”

Post is, however, the kind of boss who pays her debts. Last summer, she challenged the 550-unit Red Robin organization to improve its net promoter score, a metric that measures customer satisfaction. If they achieved the goal within a certain timeframe, she would get inked.

From the previous September, that number was up around 15 percent. Following the announcement, however, it boosted another 15 percent. “What had taken them a year to do, they accomplished in the next six months,” Post says.

During a company meeting in Las Vegas, Post made good on her promise. Along with a camera crew, she headed over to Huntington Tattoo Co. and introduced herself to Jesse Mora, a quiet, tattoo-clad man with his daughter’s name emblazoned above his eyebrow. Understanding she wasn’t, in all likelihood, Mora’s typical clientele, Post approached with some caution.

That morning, Post narrowed the options to three designs and let the office vote by applause. They picked an image from the brand’s “Let's Burger" ad campaign. Billy Burger is tethered to a heart with Red Robin in the center.

Post, whose 22-year-old son has three tattoos, has never been inked before. She considered her ankle before people told her it was one of the most painful spots. That’s when she discovered the cold shoulder movement, which “exposes just enough of my not so young upper arms that I could get a tattoo done and still maintain some modesty and decorum,” she says.

The process took less than an hour.

“I’ve had more painful meetings frankly,” Post says. “[Mora] was terrific. It was like tattooing his mother I’m sure. It did not hurt nearly as bad as I had set myself up to believe it might.” 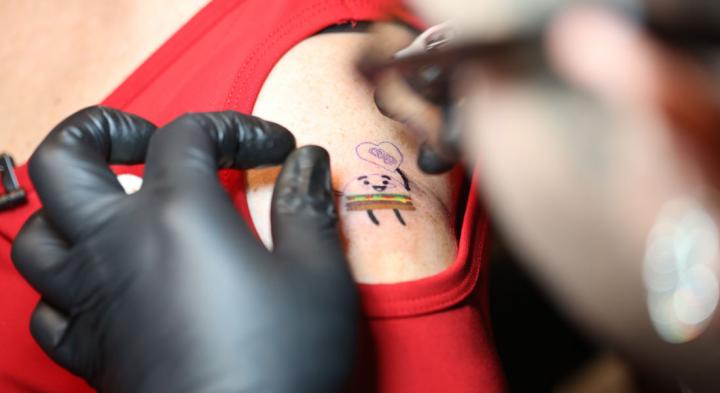 Post gave Mora a Red Robin gift card, and they snapped a selfie. She even ended up being featured in Inked Magazine.

“I can ensure you I’m probably the oldest woman in there,” she laughs. “I’m not one of their typical cover models, let me say that.”

Post says she has no intentions to get a second tattoo and realizes how high this sets the bar for future motivational tactics. She also understands that it would be challenging to walk into an interview now with a logo permanently drawn on her shoulder. No matter, though: Post hopes to retire with the company that has already promoted her three times.

The lighthearted challenge underscores the direction Post hopes to advance Red Robin, which is navigating the challenging arena of casual dining by focusing on, as she puts it, “understanding what brought you here.”

Red Robin’s total revenues were up 1.8 percent in the fourth quarter of 2016, while comparable restaurant revenue fell 4.3 percent. For the entire year, revenues grew 3.1 percent as comparable revenue dropped 3.3 percent.

Post says Red Robin’s changes, which have really been centered on the customer experience, truly circled the topic in the back half of 2016, and the results began to reflect that, leading to a very optimistic path forward.

NPS scores are determined by a diner’s decision whether to recommend Red Robin to a friend or not, using a 0 to 10 scale. Post says they take the top two—9 and 10—eliminate 7s and 8s, and consider 6 a detractor. So the score is the 9s and 10s minus the 6 and under selections.

This is all measured through a tabletop device. In the last year, she says well over 7 million people cast a vote, meaning the 30 percent increase was nothing to gloss over.

“It was a big goal for us to accelerate our momentum,” she says. “We had been improving steadily in regards to our customer service but we started to plateau a bit, as you do with anything when you see an improvement.”

Post admits she didn’t think the boost would happen so quickly. “I kind of threw it out there, and as I looked at the goal it seemed like a real reach frankly. I wasn’t priming my arm.”

Red Robin rolled out its kitchen display systems, moving away from a paper-ticket based model. Otherwise, the improvements can’t be credited to technology or physical changes: the lift came from within the company’s four walls.

“What I was most proud of was that they supported each other. So those that were doing the very best reached out and coached the other restaurants that needed a little bit more help,” she says. “We saw a real team camaraderie and pride around getting it done.”

Part of that was understanding where Red Robin fits into diner’s lives. With the onrushing arrival of fast casual and fine dining options into the marketplace, casual dining has struggled to find its niche. Post says this can be credited to a case of mistaken identity. 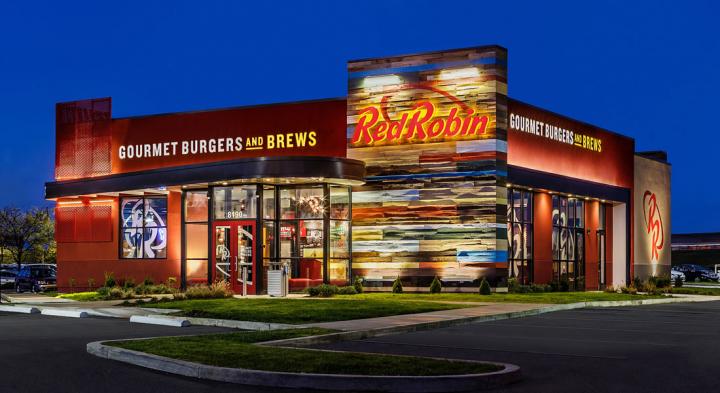 “Our guest does not use Red Robin necessarily as the destination. We tend to be part of another experience. Be it a movie or shopping. Getting the kids back from the soccer field or whatever,” she says. “It’s real important to them that we kind of slot in between what they’re doing and yet still provide full service. They can get faster food but what they want to do is enjoy their time with whomever they decide to dine with. And that’s where the full service component becomes so important.”

She says Red Robin is often a last-minute decision for guests. And there’s nothing wrong with that. It makes delivering quality food fast, with outstanding customer service, all that more important. Red Robin serves a much larger lunch audience than many casual brands as well, operating at around a 50/50 split, she says.

“Now that we’ve got a good handle on it it’s going to make a difference,” she says, adding that the company also plans to improve its takeout service for guests who want to “watch Netflix at home and still eat a great Red Robin burger.”

“It’s about respecting who you are, and dealing from that position of strength and differentiation as opposed to trying to shift to be something you’re not,” she says.