Red Robin's traffic and same-store sales have struggled throughout the past few quarters.

Seven of the company's 10 closures will be mall restaurants.
May 2019 Danny Klein

The mall concern at Red Robin isn’t exactly new, but it appears to be coming to a head. The burger chain announced May 30 the impending closure of 10 underperforming restaurants—seven of which are enclosed mall units. These stores had average-unit volumes of $1.8 million and totaled nearly $1 million in pretax operating losses in the first quarter of fiscal 2019.

The related leases allow Red Robin to go dark on the locations, and it “will pursue all subleases and lease termination options as quickly as possible,” chief financial officer Lynn Schweinfurth said during the company’s Q1 review.

As for what’s next, Schweinfurth said, the company would “work with our landlords to try and achieve some rent concessions.” But there could be other cases where Red Robin “naturally exits” upon the expiration of the term.

So this shift in Red Robin’s landscape will likely continue.

Historically, AUVs were not dramatically different between mall venues and the rest of Red Robin’s system, chief operating officer Guy Constant added. But occupancy levels and costs were higher, resulting in dampened profitability. That was nine to 12 months ago. Now, the challenge is cresting because same-store sales are significantly lagging non-mall stores.

Schweinfurth said not all of Red Robin’s mall units are “bad locations.” Yet it’s a portfolio segment the chain is approaching with added urgency. 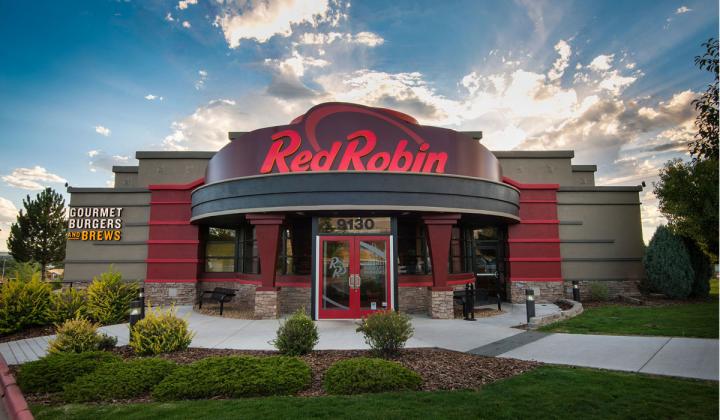 Red Robin's mall footprint will be down to 66 restaurants after the closures.

It was Moore’s first quarterly assessment since taking the position in April. Denny Marie Post, who joined Red Robin in 2011 and held the top title since 2016, retired, which went into effect immediately. Moore was a director at Red Robin since 2007 and its board chair for the past nine years. She also previously served as board member and president at Sonic Corp.

She said Thursday Red Robin is working with The Elliot Group to assist in its CEO search and the interview process is underway. Additionally, the company continues to actively work with The Cypress Group on a refranchising initiative targeting about 100 locations for sale. At quarter’s end, 483 of the company’s 579 locations were corporate run.

The comeback effort at Red Robin is four-pronged, Constant said. Target No. 1: staffing, particularly at the general manager level.

READ MORE: Inside the troubling state of the restaurant general manager

Red Robin’s staffing has been a trial lately. Efforts to trim labor costs ended up slowing table turns and bottlenecking wait times. Peak business suffered especially. Red Robin tried to cut two positions and put table-clearing duties on servers’ plates. The host position was asked to handle not just dine-in guests, but carryout orders as well. Last August, this issue spiked as Red Robin’s weekend walkways increased about 85 percent, year-over-year. Total ticket times out of the kitchen hiked about a minute on average, and so did wait times. Tables weren’t being cleaned efficiently and customers turned around when they saw the line stuff into the lobby.

“We know we can improve the overall guest experience, shorten wait times, reduce walkaways, have cleaner dining rooms, and effectively identify and resolve potential issues by continuously getting our managers on the dining room floor and at the host stand during peak hours,” Constant said.

Overall satisfaction scores improved throughout Q1, he added, reversing a trend that carried throughout all of last year and hit a low point at the end of Q4. Dine-in traffic declined 4.2 percent to close the year.

Here’s a look at how comps have tracked, which paints a challenging picture:

Constant said, year-over-year, walkways are down 4.2 percent, “wait times are shorter, guest complaints on cleanliness and wait times have declined meaningfully, and guests have told us that they've seen marked improvements in problem resolution when there is an issue.”

He added Red Robin shifted its labor investment from overstaffed “shoulder” hours during the day to understaffed peak periods. This boosted throughput for busy shifts and helped Red Robin capture sales without making an incremental investment in labor expense.

Constant said getting to a higher staffing level came down to “peaking the peaks” and then having those extra employees cover remaining shifts during the week.

“We, like many other organizations, have been battling staffing challenges for some time,” he added. “And we've been kind of leveling out and been at the same point for quite a while. So we made a conscious effort at the start of 2019 to say that we wanted to get to better manager staffing levels, and we've seen that progress happen throughout the first quarter.”

There are a few other triggers. Red Robin reduced its menu size by about 10 percent over the past couple of years so it can focus on core items, like burgers, chicken, and steak fries. More simplification is coming in the second half of the year, chief concept officer Jonathan Muhtar said.

“It all starts with the guest experience and improving the customer experience, and the return of sales, and return of customers won't happen in a straight line." — Pattye Moore, Red Robin interim CEO.

Red Robin also rolled out headsets in May. While it might not seem like a major point, Moore said, the technology allows managers and staff to communicate on the floor, which results in quicker turns and better on-shift engagement. Additionally, portable point-of-sale terminals are en route. This will allow servers to take and input an order at the table. Instead of an employee writing down multiple orders and running back to a central terminal, which can overwhelm the kitchen, the guest’s order will go straight to the back, one guest at a time. Moore said this would improve accuracy as well as ticket times.

“By having a server handheld, we're able to pace the orders to the kitchen and, as a result, get much more effective delivery in the kitchen, which should help on all those other metrics that we've talked about,” Constant said.

Outside the four walls, and reaching new guests

Red Robin made another leadership change, bringing on Cyrus Kelley as VP of consumer insights and loyalty, from Darden. The title alone provides a glimpse into where Red Robin’s efforts are planned. “Cyrus and his team aim to greatly enhance our data and insights capability, which will guide all guest-facing activity going forward,” Moore said,

Moore said catering is “essentially all incremental,” and also aids brand awareness and relevancy. In 2018, Red Robin built out its catering leadership and infrastructure and began adding sales employees supported by targeting marketing.

And building on the marketing note, as it relates to in-store traffic, Red Robin’s value message shifted in Q1. The first half of 2019 will be focused on its high-quality, gourmet line as new products, like the Porkiyaki Burger, get pulsed in.

Red Robin is in the final development stage of a new omnichannel creative campaign, set to launch in July, Moore said. The company moved media weight from Q1 to Q3 so Red Robin can ensure it’s ready from an operations and staffing perceptive to solidify restaurant routines ahead of the new promotion.

In Q1, Red Robin’s 3.3 percent comps decline was driven by a 5.5 percent drop in traffic, as noted earlier, and partially offset by a 2.2 percent jump in average check. Net pricing, after taking into account discounting, was 1.9 percent. The 0.3 mix increase was due to lower Tavern mix and higher entrée mix.

What Red Robin has done is pivot away from featuring its $6.99 Tavern as its primary message in favor of moving guests toward its gourmet options. That will be the national focus while a $10 gourmet bundle will be promoted at the local level.

“It all starts with the guest experience and improving the customer experience, and the return of sales, and return of customers won't happen in a straight line,” Moore said. “But we do have marketing initiatives that, as we talked about, will kick off in the second half of the year.”