Red Lobster hopes its Seafood with Standards platform can be an example for the rest of the industry.

The 700-unit icon is setting a new bar for competitors to follow.
June 2018 Danny Klein

If you ask diners across America to pinpoint their seafood joint, many would say Red Lobster. This is especially true in landlocked states and markets without coastal independents. But how often is this the follow-up question: Is the seafood served responsibly sourced? One of the cloudiest supply chain conversations in foodservice, Red Lobster has diverted heavy resources to better seafood-purchasing since its founding in 1968. Yet you could also argue the chain’s efforts have been understated to-date.

“Our vision is to be ‘Where the world goes for seafood, now and for generations.’ To make that a reality, we have to follow great sustainability practices ourselves,” says Kim Lopdrup, chief executive officer of the 700-plus-unit brand. “However, it accomplishes very little if we pass up over-fished species and others still buy them.”

Put simply: Red Lobster wants to evolve beyond a company comfortable with its own practices—it wants to be an agent of change.

Back in January, Red Lobster announced its Seafood with Standards commitment as part of a 50th anniversary celebration. It promised to support best fishing and farming practices with eco-certifications in seafood sourcing around the world. Among the requirements:

That still wasn’t quite enough, however. Red Lobster took it to the next level May 15 when it partnered with The Monterey Bay Aquarium Seafood Watch Program.

Ryan Bigelow, program engagement manager with the company, which aims to improve sustainability of global fisheries and aquaculture around the world, says teaming with Red Lobster was a game-changer, and he hopes it can signal a boon for an even greater cause—one that might accelerate a conversation lacking momentum compared to other proteins.

“Sometimes customers are difficult to reach [on this subject],” Bigelow says. “So to have a restaurant in their community they know has made a commitment—that sets the bar for the rest of the industry. … It’s huge. It’s great for the ocean. But just as important is that surrounding restaurants are now going to see that sustainability as the rule, not the exception.”

Red Lobster says this partnership builds upon its commitment.

This isn’t Red Lobster’s first trip to the front of an industry issue. It’s a founding member of the Global Aquaculture Alliance—an international non-government organization dedicated to advocacy, education, and leadership in responsible aquaculture. Red Lobster helped develop “Best Aquaculture Practices” certification and was among the first to require all suppliers to follow those standards for shrimp, salmon, tilapia, and other seafood.

The Monterey Bay Aquarium Seafood Watch Program has 379 direct business partners and more than 1,000 companies at 150,000 locations worldwide using its science to help inform purchasing decisions. And now one of those is Red Lobster, a domino Bigelow says could bring other key players along.

How it works is different by the restaurant, but it typically goes as follows:

A brand will sit down with Seafood Watch, look over purchasing, and then hear recommended changes that would bring the restaurant in line with its goals. After that, a contract will outline target dates to reach a certain level of sustainability. Lastly come the on-the-ground efforts.

"At Red Lobster, we know where every piece of seafood that we serve in our restaurants comes from." — Kim Lopdrup, CEO of Red Lobster. 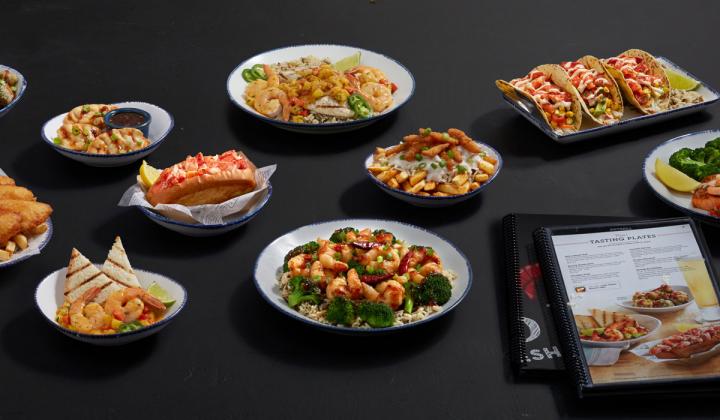 Red Lobster revamped its website to better inform guests of its seafood commitment.

Engaging staff is key, Bigelow says. There are videos and print materials. The company will also conduct in-person presentations and host webinars to train restaurant employees on everything from purchasing to server knowledge to communications. The latter note, Bigelow says, is becoming critical. Communicating a brand’s commitment to customers is a two-way issue. Not only will it help a restaurant sell to socially conscious customers, Bigelow says, but it will also inform customers of what to look for and help set expectations.

This returns to why Red Lobster is such a big catch for Seafood Watch. It’s like having the first pick in a backyard tug of war.

“We’re very excited about the relationship,” Bigelow says. “There is a lot of power in this to drive the kind of change we’re seeking.”

“The partnership between Red Lobster and the Monterey Bay Aquarium Seafood Watch program brings together two sustainability leaders who care very much about creating and upholding seafood sourcing standards that ensure availability of seafood for generations,” Lopdrup adds. “Together, we believe there is tremendous opportunity to have a positive impact on the whole seafood industry and the health of our oceans.”

Red Lobster is going to be a tough act to follow for competitors, which is exactly the point. The brand has buyers and inspectors active in more than 20 countries around the world, working directly with suppliers to make sure 100 percent of its seafood is traceable, sustainable, and responsibly sourced. “At Red Lobster, we know where every piece of seafood that we serve in our restaurants comes from,” Lopdrup says.

Lopdrup adds that Red Lobster plans to use scientific data and educational tools from the program to further “inform and guide our seafood sourcing decisions as well as educate our guests and team members about seafood choices.”

Recently, Red Lobster updated its website and added a Seafood with Standards section that contains information about its commitments, including details on the partnership, as well as in-depth information about where and how its seafood is sourced.

There are breakdowns of why to serve wild-caught (all wild-caught species at Red Lobster are sourced seasonally, by area, and by catch quotas; at–risk species are avoided) and why farm-raised (Red Lobster only works with suppliers who source from well-managed fisheries that minimize impact on marine habitats and other wildlife; the company works with third-party certifications to carefully monitor water quality near aquaculture sites to prevent pollution). Red Lobster even tells the sourcing story of every type of seafood on its menu, from lobster to crab to shrimp to fish.

Red Lobster's new webpage also includes a video about its sourcing practices, which began airing on digital channels in January and was so well-received that it was then aired on national broadcast TV in the Super Bowl pregame show.

Bigelow says this kind of information is important since the closest connection most people have to the ocean comes through the food they eat.

“One point to remember is how difficult it can be for the end consumer to find sustainable seafood,” he says. “You can’t be 100 percent sure what you’re buying, and if you don’t know how it was caught or where it was caught, that’s really difficult.

That’s why we’re really pushing consumers to find partners—businesses that have made a commitment, because it takes most of that difficult thinking right off their plate. They can just go to a partner and assume that they’re buying responsible seafood.”

“And that’s why when the world’s largest seafood chain, Red Lobster, comes to the table and is interested in a partnership—that’s a huge boon for us. You’re now reaching a huge swath of the nation that maybe didn’t know that seafood sustainability was important. Maybe they knew but didn’t have the tools to make the right purchases. Now they do.”

Seafood Watch’s science-based recommendations indicate which seafood items are “Best Choices” or “Good Alternatives,” and which ones to “Avoid.” It shares this information online, through its app, and to organizations—zoos, aquariums, restaurants, grocers, and more—across North America. It’s a plug-and-play program complete with materials ready to be deployed.

Red Lobster is going to serve Seafood Watch-recommended products now through the relationship.

Since becoming an independent company in 2014, Red Lobster has opened 22 new restaurants, and its 50th year is turning out to be a memorable one. The chain recently launched a new menu highlighting Tasting Plates, made some significant kitchen upgrades, including new equipment, like lobster & crab pots and sauté stations, and introduced fresh technology to ensure all components of each order finishes cooking at the same time. This $51 million investment in new equipment and back-of-house technology, Red Lobster says, allows the chain to improve the quality of its food and pace of meal.