Denny's is making improvements across the board, from digital to food quality to store designs, and more.

Re-Introducing Denny's, the Iconic Brand You Thought You Knew

America's Diner was founded 65 years ago, and continues to balance classic with innovation as well as any restaurant in the country.
March 2018 Danny Klein

Denny’s. The brand you thought you knew.

Are we talking about the same America’s Diner that has been around since Dwight D. Eisenhower’s first year in the White House? That’s the kind of question chief marketing officer John Dillon wants customers to ask as they sit down to a meal at one of Denny’s 1,735 restaurants around the country.

“Part of the luxury and challenge, quite frankly, of having an almost 65-year-old brand is you have a lot high awareness, no question, but a lot of that awareness has been based in past efforts,” Dillon says. “It’s the brand you thought you knew, but we’ve changed.”

Denny’s has made quite a few changes actually, especially when it comes to its menu and ability to meet the convenience wave washing over the restaurant world. But are customers noticing? Many top- and bottom-line figures say they are. Yet, there’s still plenty of white space for Denny’s to disrupt past notions, Dillon says. And this is a story Denny’s want to tell, and tell loudly.

In a recent TV ad, two diners are eating the brand’s new Dulce de Leche Craft Pancakes when one of the customers says they remind her of her favorite bakery. The chef responds: “You mean Denny’s, Denny’s?”

“We’re made-to-order food and some of the ingredients we have on our menu will surprise people,” Dillon says. “Maybe those are people who don’t know about the brand, and there are still a few, but overall it’s familiar guests who might have older perceptions of the brand.”

Denny’s wants to give guests a vibrant view of what’s taken place behind the corporate curtain in past months. Without question, 2017 was a metamorphic year for the brand. Like any chain emerging from decades of business as usual, Denny’s limped out the gate a bit when some of these initiatives were first deployed.

The brand started fiscal 2017 with first-quarter same-store sales declines of 1.1 percent, year-over-year. Those numbers turned quickly, however. In the second quarter comps rose to 2.6 growth and they lifted 0.6 percent in the third—a period marred by weather issues. Then, in Q4, Denny’s grew its same-store sales 2.2 percent versus the prior-year period and closed out the year with a 1.1 percent increase, which marked seven straight years of positive system same-store sales—something that is worth appreciating for a family-dining brand of this size.

“This reflects the momentum generated by our revitalization strategies,” president and CEO John Miller said in a conference call after Q4.

With the numbers backing the progress, Dillon believes now is the ideal time to start sharing the news.

But before rewinding to 2017, Dillon says it’s important to understand where all of these changes stem from. A few years back, Denny’s began clarifying its brand purpose behind the scenes. This crystalized and focused the chain’s efforts across the board, Dillon says.

In 2011, Denny’s launched a new campaign intended to shift its image from a family restaurant to America’s Diner. Denny’s said this wasn’t a pivot; it was simply recognizing and promoting what the brand knew it stood for already. And then there’s the mantra, “We Love Feeding People,” which Dillon says came from a newspaper article way back when that featured Denny’s founder Harold Butler explaining why he opened the chain.

Denny's has changed more than 70 percent of its menu in the past five years.
“We want pancakes that make our guests say, ‘Wow. This is exactly the kind of quality I want when I go out and spend my hard-earned money on breakfast or dinner.’ — John Dillon, Denny's chief marketing officer

“We said that’s it, that’s exactly it. It’s not just the physical sense of feeding people but it’s feeding people’s minds and feeding people’s souls, and a diner can really deliver that in a way that’s really differentiated and unique for us,” Dillon says.

But then there arrives the conundrum Dillon says Denny’s had to aggressively tackle. You can become so ingrained in purpose and history that people grow comfortable with the brand, even complacent. While guests adore comfort food and always will, there’s a seismic change in expectations taking place day-in and day-out in this business.

Here’s a statistic Dillon acknowledges probably very few consumers in America are aware of. In the past five years, Denny’s has improved or changed more than 70 percent of its menu. In the summer of 2016, the chain held a press conference at a corporate location in New York City. The announcement: Denny’s was launching a new pancake recipe that executives said was 50 percent fluffier than the previous one. These feature real eggs, fresh buttermilk, and a hint of vanilla.

Dillon says the original pancakes weren’t even performing poorly when the swap was made. “But we said we’ve elevated our game at Denny’s to the degree where fine is not OK for us anymore,” he said. “We want pancakes that make our guests say, ‘Wow. This is exactly the kind of quality I want when I go out and spend my hard-earned money on breakfast or dinner.’ Those are the elevations and changes we’ve made to menu.”

Dillon says he often steps into a Denny’s and grabs a meal at a booth, and just listens to the feedback. “Literally you hear, ‘Wow. I may not have expected this from Denny’s five, 10, 20 years ago, but I love the menu Denny’s is creating and delivering to us now,” he says. “The nice part is we have a lot of fun stuff in the pipeline.”

Another noticeable change is the continuation of Denny’s Heritage remodel program. Just about 67 percent of the entire system has been updated to the refreshed look, which Miller said generated a mid-single-digit range sales lift over legacy stores. By the end of 2018, it should be around 80 percent complete.

“It even makes the food taste better,” Dillon says. “That’s the beauty of it. The scores we get across the board, from experience ratings to food ratings, have really helped improve the guest experience across all dayparts.” These updates give outlets a more old-fashioned-diner feel, and create a warmer, more welcoming atmosphere. It has helped open up the dinner daypart as well, he said. 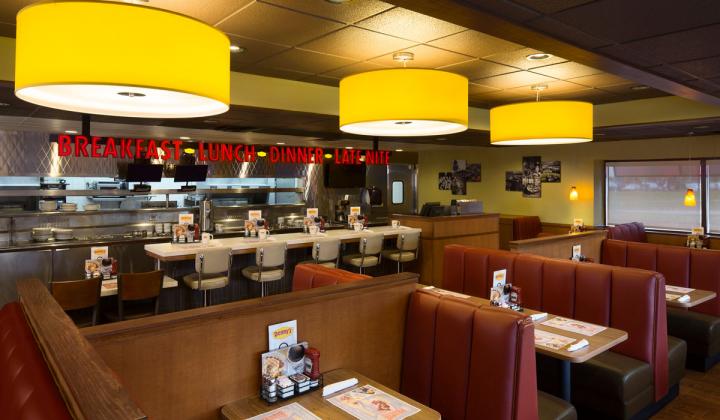 A look inside Denny's Heritage remodel program, which could be complete in 80 percent of stores by the end of 2018. 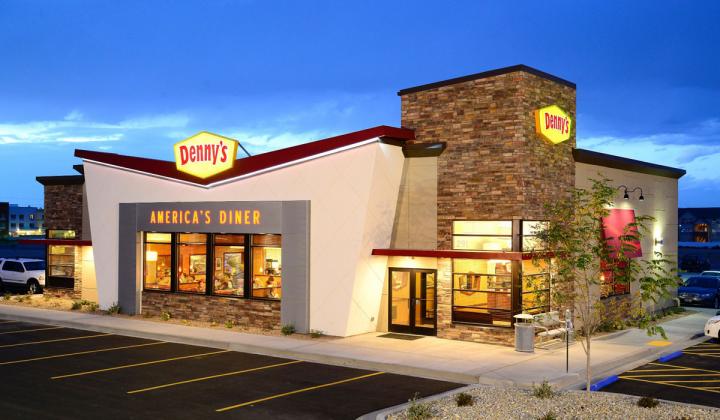 The exterior of Denny's new design for stores.

Denny’s might be nostalgic on some notes, but it has a real Gen Z, millennial vibe going on. To begin with convenience, a changing arena in casual dining and across foodservice, Denny’s on Demand is one of the more extensive platforms rolling. In May, Denny’s introduced a new ordering platform that allows guests to place a mobile or online order for take or delivery (where available). And even, in select markets, this delivery service is live 24/7. This was launched via social media channels as well, which won’t surprise any followers of the brand’s offbeat accounts. Consumers can order through Twitter with Direct Message and on Facebook via branded Chatbot and other on-page options. There are also dedicated Snapchat filters to share Denny’s on Demand experiences.

Here’s a snapshot: On Christmas Day, a company-record 12.8 percent of total sales came via off-premise.

Currently, about 50 percent of Denny’s domestic system is actively engaged with one or more delivery service options, and the number is growing. Dillon says it is helping Denny’s appeal to a younger demographic as well as late-night diners.

“We are learning along the way, just like any other brand that’s in this space. But we’re pleased with the progress but even more excited about what’s to come,” he says.

And speaking of social media, a realm where Denny’s has 464,000 Twitter followers, 1,332,692 page likes on Facebook, and is legendary for its eccentric (putting it lightly) Tumblr account, Dillon says the brand simply enjoys having an off-center persona.

“We don’t take ourselves too seriously,” he says. “We’re warm and welcoming. You sit in a dinner and you talk about stuff that’s going on in the world. You talk about pop culture. You talk about things that are happening. You have fun conversations about it. You might be talking to somebody you might normally not talk to. That’s the beauty of a diner. What we’ve done is take that diner feel into the digital world.”

Can Denny’s correlate that with actual guest traffic? Not exactly, but Dillon says they’ve seen plenty of instances where diners come in because of something they’ve seen on social media, and aren’t shy sharing that fact online.

Much of this voice and purpose has translated to Denny’s philanthropic efforts. The brand donated $2 million as part of its annual fundraising efforts for No Kid Hungry and created a Mobile Relief Diner in the wake of hurricanes Harvey and Irma.

“Again, it’s based in that brand purpose in that we love to feed people. Their stomachs, their minds, and their souls on a daily basis. That’s really become a rally cry for every employee in our system,” he says.