The executive says the buffet is alive and well, and that it will be boosted even further with a new store design.

Those words are powerful, especially considering how matters looked in the thick of the pandemic for buffet concepts. Cicis and a couple of Golden Corral franchisees declared bankruptcy. Garden Fresh Restaurants, the parent of Souplantation and Sweet Tomatoes, permanently shut down its entire 97-unit footprint.

Solano describes those times as “really ugly.” Board meetings seemed to pop up every 10 seconds, with most of them concerning how much cash was on hand. During RAVE’s fiscal quarter ending June 28, 2020, Pizza Inn’s domestic sales dropped 39 percent. At the end of March 2020, there were 152 Pizza Inn restaurants in the U.S., including 83 buffets, 56 delivery/carryout units, and 13 licensed Pizza Inn Express locations. At the end of this September, the total count was 128 stores (72 buffets, 47 delivery/carryout units, and nine Pizza Inn Express outlets). RAVE has also received warnings about being delisted from the Nasdaq when its stock price dipped below $1.

But there’s a reason why Solano is optimistic. Firstly, Pizza Inn grew its buffet unit count to 72 restaurants in fiscal 2022, up from 70 in 2021—net growth that hasn’t happened in about 24 years, Solano says. Also, In September, RAVE announced it bought back shares, which it hasn’t done in about a decade, and the company has experienced profitability for 10 straight quarters.

Pizza Inn’s same-store sales grew 12.5 percent in Q1 year-over-year. RAVE’s net income was $300,000 for the first quarter, or flat compared to last year. Adjusted EBITDA increased to $500,000, growth from $400,000 in the year-ago period. No new Pizza Inn stores opened in Q1, but Solano says the chain is “on track with a strong pipeline of new stores.”

Pizza Inn accomplished these feats by leaning into its strengths. In May 2020, the company announced its Right-Way Buffet, a model of operation filled with safety precautions, like a dedicated sanitizer captain, one-way traffic flow to adhere to social distancing, pay-from-the-table options, and closure of self-service beverage stations. Additionally, the restaurant found room to innovate, with its House Pan Pizza, Cheese-filled Pretzel Crust, and NYXL Pizza.

“I'm rooted in the consumer. The consumers are going to want value, they want convenience, they want great food,” Solano says. “And a buffet is highly convenient. Most of the places you pay after you eat. People walk in and grab a plate, that is fantastic. That's a great experience. And our target is families with kids under 12, and if your kid is under 12, parents are despots man. They tell you what time to go to bed, when you brush your teeth, do your homework, what to eat. And when you walk into Pizza Inn, kids are emancipated. That experience of the buffet, the value of variety, and just that experience of being with family and friends, I think it's very casual right there.”

A crucial turning point is coming in Asheboro, North Carolina, in late January, where Pizza Inn will debut a modernized prototype that places customer experiences at the forefront. The buffet remains as the centerpiece; on the wall, a message reads, “the family that buffets together stays together." The updated design features a party room, an Instagrammable "say cheese" wall, game room, self-service sundae bar, and outside patio. For the design, Pizza Inn worked with Chute Gerdeman out of Columbus, Ohio, a company Solano previously worked with when he was at Domino’s. 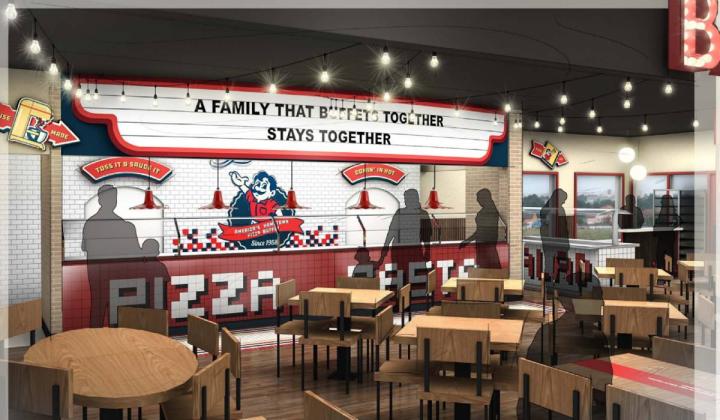 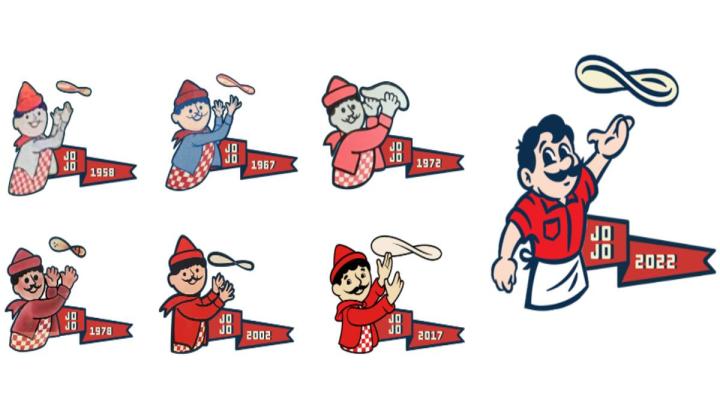 “We're trying to create selective demand for our brand, not primary demand for the category,” says Brandon Solano, CEO of RAVE Restaurant Group, parent of Pizza Inn. “So we don't want people to say, ‘Hey, let's get pizza. We want consumers to say, ‘Let's go to Pizza Inn because that's where I can have this amazing experience.’”

Pizza Inn also reimagined Jojo, its classic mascot. Before 2022’s version, there have been six other iterations of Jojo, all of which show him tossing a pizza with two hands and long sleeves. The newest edition depicts the mascot with a clenched right fist and rolled up sleeves—a visual that speaks to Pizza Inn’s blue-collar roots. Solano calls franchisees and customers “gritty folks” who aren’t “vacationing in the Cayman Islands.”

“Our image I think could really use some updating,” Solano says. “We've got a lot of old assets, and we're really looking forward to getting the first couple done, taking a look at sales, taking a look at the cost, determining a return on investment, and sharing that opportunity with our franchise partners.”

The CEO notes that Pizza Inn once had hundreds of buffets. Although it’s a long road ahead to recoup that footprint, Solano prefers to start in communities where the chain once had high-volume stores and a lot of space is available, like Asheboro. He believes Pizza Inn can grow 10x from where it’s at today without entering a new market. Solano says the company has “latent equity.” For example, when he’s traveling and wearing his Pizza Inn gear, people often stop him and ask when Pizza Inn is coming back. He also sees the desire across social media.

Whether it’s five years or 20 years, customers remember their Pizza Inn experience, Solano says. He recalls a recent reopening in Blytheville, Arkansas, a store that was temporarily closed for four months. The restaurant features some of the new brand elements, and is operated by a 23-year-old local steel mill worker who didn’t quit his day job. Sales are increasing, to the point that Solano had to park in a different lot just to make it inside for lunch on a Thursday. The CEO has seen similar results in reopenings in Waycross, Georgia, and Elizabethton, Tennessee.

“We take places where we've had success in the past, we come in with new franchisees and a new building and a new menu and we're really showing tremendous growth,” Solano says. “We've had a number of stores that have reopened.”

In addition to social experiences, the new image is about bringing Pizza Inn’s food quality to life. Solano acknowledges that one of the biggest knocks on buffets is menu inadequacy, but he refutes that criticism with Pizza Inn making its dough in-house, grating cheese blocks of whole milk mozzarella, creating ranch dressing from scratch, and chopping the salad bar each morning.

Pizza Inn isn’t compelling franchisees to transition to the reimage yet. The company will first collect data on costs, sales, and ROI, before making their official pitch. But Solano suspects it will be a success.

“We're trying to create selective demand for our brand, not primary demand for the category,” Solano says. “So we don't want people to say, ‘Hey, let's get pizza. We want consumers to say, ‘Let's go to Pizza Inn because that's where I can have this amazing experience.’”