Bocce and bowling, reimagined for a socially distant world.

Did Pinstripes CEO Dale Schwartz ever envision getting in the mask-enforcing business? About as much as he imagined staging a grand opening for 13 restaurants on a single day.

Yet the moment arrived July 17, as strange and palpable as most COVID-19 realities have felt. One of the nation’s upstart eatertainment concepts, which plans to hit 100 units in the next two decades, Pinstripes had been in operational hibernation since March 16. Given its venues range from 28,000–38,000 square feet, there wasn’t much of an intermediate bridge, if any.

During that time, Schwartz and the chain designed a nearly 100-page comprehensive relaunch plan that split into four buckets: Safety, product offerings, marketing, and financials.

And exactly a week before July 17, Pinstripes turned on a countdown across its marketing channels. Every day, people received another reminder: “It’s six days from when you can enjoy our terrific menu again,” and so forth. Each restaurant touted a lifetime of free bowling and bocce to customers as a restart giveaway.

In truth, however, Pinstripes prepared for the moment much longer. But Schwartz understood a few significant hurdles ahead. One of which was simply ensuring Pinstripes was in position to harness pent-up demand.

Schwartz visited “hundreds of restaurants” leading up and says he was shocked and surprised by the lack of signage and safety presence outside venues. It served as a cautionary guideline.

Pinstripes bought two wine barrels for each store and placed them out front, with curbside pick-up signs on clear display—cues to the contactless need. There are also at least three 12-inch circles in the shape of bowling or bocce bowls (the concept’s core activities) to illustrate 6-foot spacing. Another sign in front, with a message about “playing it safe” features an image of a mask that talks about Pinstripes' policy and how they’re required upon entry.

At least to start, the chain plans to dedicate an employee to the exterior of restaurants to make sure potential guests are wearing masks, answer questions they might have, or offer them complimentary PPE if they show up unaware.

“[Other restaurants] are just kind of throwing up a little sign with masking tape on a widow,” Schwartz says. “No, our view is that this may be the new normal for not three months; this could be six months. It could be nine. It could be 12. And if we’re going to do the new normal, we want to do it really, really well.”

Just a few weeks ago, Schwartz ordered 15-foot high “we’re open” flags to plant near the front door, or erect at the end of parking lots. While these sound like obvious clues to provide customers, they can’t be understated, he says.

It’s something Pinstripes observed in the weeks leading up to reopening. Just a few cars, from employees, filling a parking lot led to customers pulling in to see what was happening. It’s almost akin to the herd effect fast-food restaurants often witness when there’s a car or two in the drive thru.

Like other eatertainment concepts, which have been among the hardest hit by coronavirus mandates, what’s happening inside locations is transformative. (Here's a look at Main Event's journey, and Dave & Buster's). 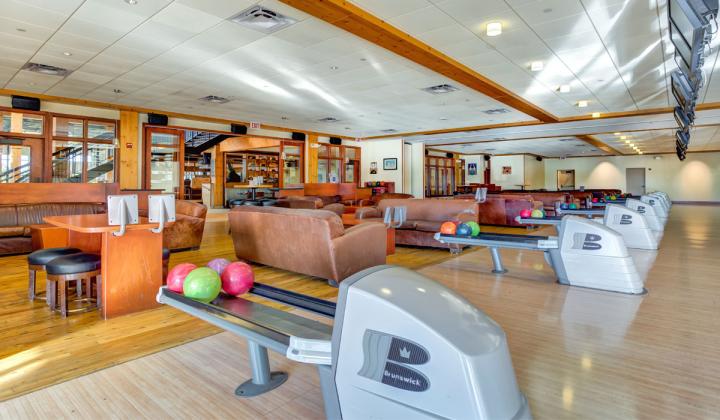 Pinstripes is putting a lane in between every bowling party. 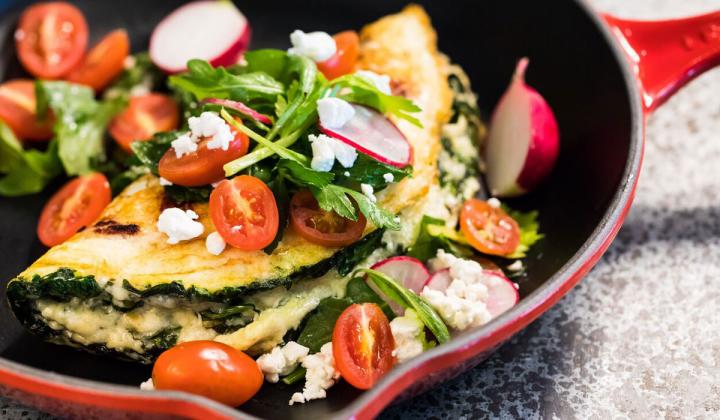 Pinstripes has moved away from buffets and other self-service items in catering events, and weekend brunch.

Now, the brand needed to engineer a way to segment its massive boxes so there could be “safe zones” for groups to hang out with each other, but not necessarily with other guests.

Pinstripes reduced seating capacities for bowling to allow each party a minimum of two lanes, and every group’s designated area is clearly marked. Reservations (bocce as well) have two hours to play and Pinstripes maintains a minimum of 30 minutes between to clean and sanitize.

It also created a concierge service where designated employees sanitize used bowling balls and place a sticker on the ball to indicate it’s been cleaned.

Customers are given gloves to select balls, and only one is allowed per bowler.

Schwartz, whose brother is a surgeon, says the company’s posture from the onset was to have all employees wear masks. It’s felt the same way about guests for at least the past two months.

Patrons can remove the mask at their tables and when they’re dining, but need to put them on if they’re headed to the bathroom, walking in, out, or just exploring the venue in a way they might come into contact with other guests or employees.

It’s a unique maze with eatertainment because the so-called “safe zones” extend beyond just tables to dine at. It’s harder to create pockets for people to bubble in. This could be the bowling lane or a private event space, given consumers often move from one section to another. Kind of like progressing from a table to the bar, only you can’t bowl from your booth the same way you could order a drink from either.

Pinstripes commissioned branded, rich-blue color masks for employees. Similar to outside, there is signage and circles on the floor to remind customers to socially distance and wear masks. Employees were trained to remain stringent, yet polite, Schwartz says. They have spares ready to go if needed and try to diffuse combative situations. But if a guest refuses to align, they’re asked to leave. The reason doesn’t matter, Schwartz says. With children under 2, who are not recommended by officials to wear masks, Pinstripes tries to stress staying in their “safe zones” and with known groups as much as possible.

“I think it’s a responsibility on everybody,” he says. “We’ve always felt we were best in class. We now want to be safest in class.”

On the dining side, Pinstripes tightened menus to improve execution and allow employees to focus on COVID-19 protocols. Where there were roughly 57 SKUs before, there are now 40 or so. And instead of a buffet for Sunday brunch, which was pushing 300–400 covers before the pandemic, Pinstripes switched to 15–20 dishes it can serve.

There are daily food and beverage specials, too. In addition to happy hours (every day but Saturday), Pinstripes rolled some weekly offers, like $12 Tuesday Beer Buckets, Whiskey Wednesdays, Thursday Night Socials, Friday 50/50 Wine, and bottomless mimosas and Bloody Marys on the weekends for brunch.

Pinstripes is leaning into its massive outdoor space as well, which push as much as 15,000 square feet in certain locations. It expanded patios to feature outdoor bocce courts, fire pits, and outside bar access. Additionally, it’s hosting local musicians on Fridays and Saturdays. 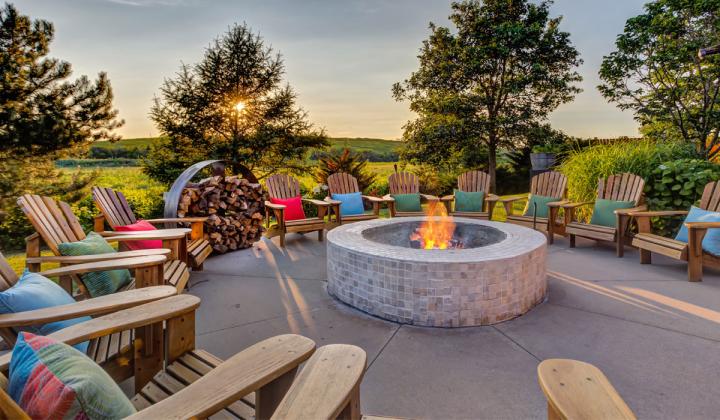 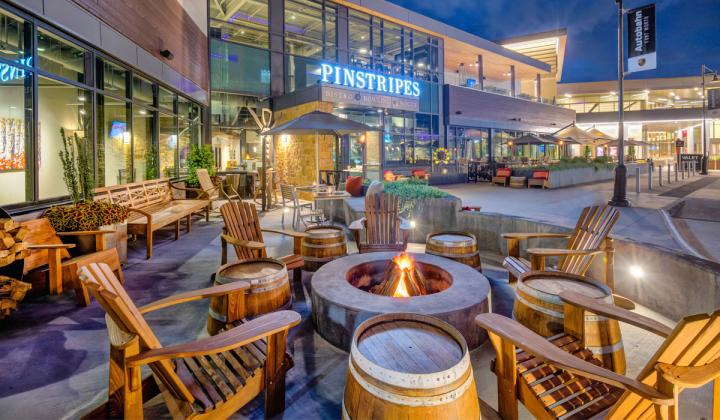 Outdoor dining is going to play a leading role in Pinstripes' reopening plans.

There’s been an off-premises push over past weeks. Pinstripes created off-site catering packages, and invested in curbside pickup and no-contact delivery via DoorDash, Uber Eats, and Grubhub. The company launched only ordering through Olo.

Upon reopening, Pinstripes introduced a promotion where any guest who spends $100 on catering receives a $50 gift certificate to use on their next visit.

Other new offerings include exclusive Italian-American Eat and Play Packages, which are intended for small gatherings of eight or 16 people, as well as Take-and-Bake carryout or delivery options.

The Americano Package: Comes with a $50 gift certificate to use toward bowling and bocce at Pinstripes and a selection of food including, baby back ribs, mac & cheese, chop salad, Ghirardelli brownies, and chocolate chip cookies, as well as bread with freshly made pesto.

The Italiano Package: Includes a $50 gift certificate to use for bowling and bocce and a selection of food including baked lasagna, Brussels sprouts, Caesar salad, Ghirardelli brownies, and chocolate chip cookies, as well as bread with freshly made pesto.

Pinstripes generally hosts about 1,000 private events per year, per location. It’s a massive swath of the company’s business, Schwartz says. But that also needed to be reimagined.

Pinstripes is limiting gatherings to local guideline and opening up entire venues to guests. The menu was pared down to remove buffets and self-service styles. Event setup was spaced out to ensure physical distancing and video conferencing is available.

As an added incentive, Pinstripes is giving customers who book a private event for $500 or more a $100 gift certificate.

This year was shaping up to be a big one for Pinstripes. The brand opened three stores in 2019 (Houston; San Mateo, California; and Norwalk Connecticut). Two were on deck for 2020 with an acceleration to five to seven openings per year expected to follow.

In the 15 months leading up to February, Pinstripes raised $25 million of minority equity from real-estate firms and retail groups, including Hudson's Bay, Brookfield Properties and Simon Property Group.

This latter strategy was born out of the country’s evolving foot-traffic trends. Malls were struggling thanks to e-commerce (outside of A-plus locations), and shifting to more experiential models. It created a gap for Pinstripes to grow.

The company said real estate developers approached them as an option to anchor complexes—to become destination attractions that could lure new customers and drive spillover traffic. Or join a co-tenant ecosystem that shares consistent and high-quality footfall. The San Mateo location, for instance, has a movie theater and is next to an Apple store.

Pinstripes had systemwide sales of $44 million in 2019, according to FoodserviceResults—a 23.9 percent year-over-year jump.

The first Pinstripes opened in Northbrook, Illinois, in 2007. Schwartz, who grew up in Cleveland, wanted to open a bowling alley and has owned the Pinstripes name since 1988. With little restaurant knowledge early on, he set about assembling an all-star team.

“One of our early board members was the founder of Maggiano’s,” Schwartz said earlier. “Another board member was the former chairman and CEO of McDonald’s [Jack Greenberg].”

COVID, understandably, stalled the plan near-term. Pinstripes has brought back 95 percent of its salaried team members and is approaching 1,000 hourly employees. Schwartz says about 85 percent or so appear likely to return, but there remain unknowns with unemployment benefits and other challenges. Pinstripes wants to make sure it can give employees the hours they need to justify coming back and leaving UI behind.

Eleven of Pinstripes’ 13 locations are in what you would deem suburban areas. And Schwartz believes that’s a good thing. Yet it also opens an additional opportunity the brand hopes to leverage.

The company wants to become customers’ “home office connection,” Schwartz says, complete with video conference and wireless internet access for anybody who wants a work space outside of their homes, either for themselves or with colleagues.

“Our sense, certainty, was that there could well be an opportunity for people who are working at home, who would just really enjoy kind of a place to be able to either do some work or do some work for a few hours and then enjoy lunch. … People who are missing the interactions with their peers. Pinstripes could do all of that.”