Olive Garden has made a lot of strides with technology of late.

Full-service restaurants in general are getting credit from guests.

Leading up to COVID-19, customer satisfaction was on the downswing for restaurants. You could likely credit this to several factors. Digital and convenience gaining relevance. Third-party delivery, surging in recent years, trading quality traits for the ability to stay on the couch. How was this surge affecting resources and investments? From table kiosks to server handhelds to aggregator orders stacking in the back, how was dine-in affected? Technology. Rising wages and the gig economy, and, in turn, more difficultly fully staffing units. A changing generation of employees. A changing generation of diners, and what they prioritize. An oversaturated industry with too many options and too much competition. It’s an endless list.

In the 2019 American Customer Satisfaction Index, diners who ordered food for delivery reported being far more satisfied (score of 83) than those who dined-in (73).

What this suggests is shifting consumer preferences—nothing the industry hasn’t faced before. A change in priorities for many guests. What diners valued was no longer so straightforward. Last year’s study showed a decline in overall customer satisfaction for limited-service chains. It fell 1.3 percent to 79, which trailed the full-service segment after holding a brief lead two years ago. Full service scored an 81, same as the previous year.

The only element to improve was beverage variety (80), which, along with food variety (80), still rated on the lower end. Food accuracy declined 2 percent to 86. Likewise, staff showed less courteous (84 versus 85) and both beverage and food quality declined to 83 from 84 and 85, respectively. Even service speed retreated 2 percent to 82 (maybe a delivery byproduct as well).

On the full-service side, order accuracy came in at a stellar 89 last year (compared to 86 for quick service). Speed of service reported 83, which showed room for improvement but was still a solid figure. But the most promising figure regarded service, and illustrated how the game had changed. Staff being helpful and courteous posted 87. Two years ago, it was 84. This was something that needed to continue gaining for full-serves to differentiate from the more convenient—and vast—options available.

And then COVID-19 arrived and blurred the lines.

From April 2019 to March 2020—the start of lockdowns across the U.S.—customer satisfaction with full-service restaurants stumbled 2.5 percent to a score of 79, falling below 80 for just the second time, according to ACSI’s 2019–2020 study, released earlier in the year. Limited-service brands declined 1.3 percent to 79.

At that juncture, all signs signaled the trend would continue to slide.

But some interesting findings have surfaced in recent months. Per a new ACSI special COVID-19 restaurant study released Tuesday, which collected more than 9,500 surveys from April to September 30, customer satisfaction with fast-food chains held steady at 78. Surprisingly, though, satisfaction actually climbed for full-service restaurants, up 1.3 percent to 80.

It appears consumers appreciate the quick pivots of sit-down brands, and are likely grateful of all the effort gone to by restaurants just to provide a pandemic escape. People are happy to eat out again.

“Given the shutdowns and setbacks, it’s pretty remarkable the restaurant industry was able to meet customer demand, and in many cases, go above and beyond,” David VanAmburg, managing director at the ACSI, said in a statement. “Full-service restaurants showed tremendous adaptability by how quickly they pivoted from traditional dine-in to takeout and delivery options. As the industry becomes even more digitized, restaurants’ ability to evolve with the times should only benefit them moving forward.”

Six full-service chains experienced satisfaction gains since ACSI’s most recent restaurant report (the April–March edition). In that report, only one improved and seven of 12 declined.

More encouraging, full-serves proved more satisfying from a delivery and takeout standpoint. Customers are now happier with delivery (up 5 percent to 81) compared to dining in (up 1 percent to 79) and carryout (up 3 percent to 77).

Clearly, the novelty of full-service chains upping their off-premises options (and getting better at it along the way) is resonating with customers. There was plenty of whitespace to gain new customers when shut downs began, and to reinforce loyalty with core guests. And it's paying off.

Olive Garden, which put stock in takeout and curbside over third-party delivery (it lowered the threshold of its own fulfilled delivery program from $75 to $40 in most states) inched up 1 percent to an ACSI score of 80, joining Texas Roadhouse (unchanged) and the group of “smaller restaurants” atop the list. Customers credited Olive Garden with making significant strides with its mobile app reliability and quality. 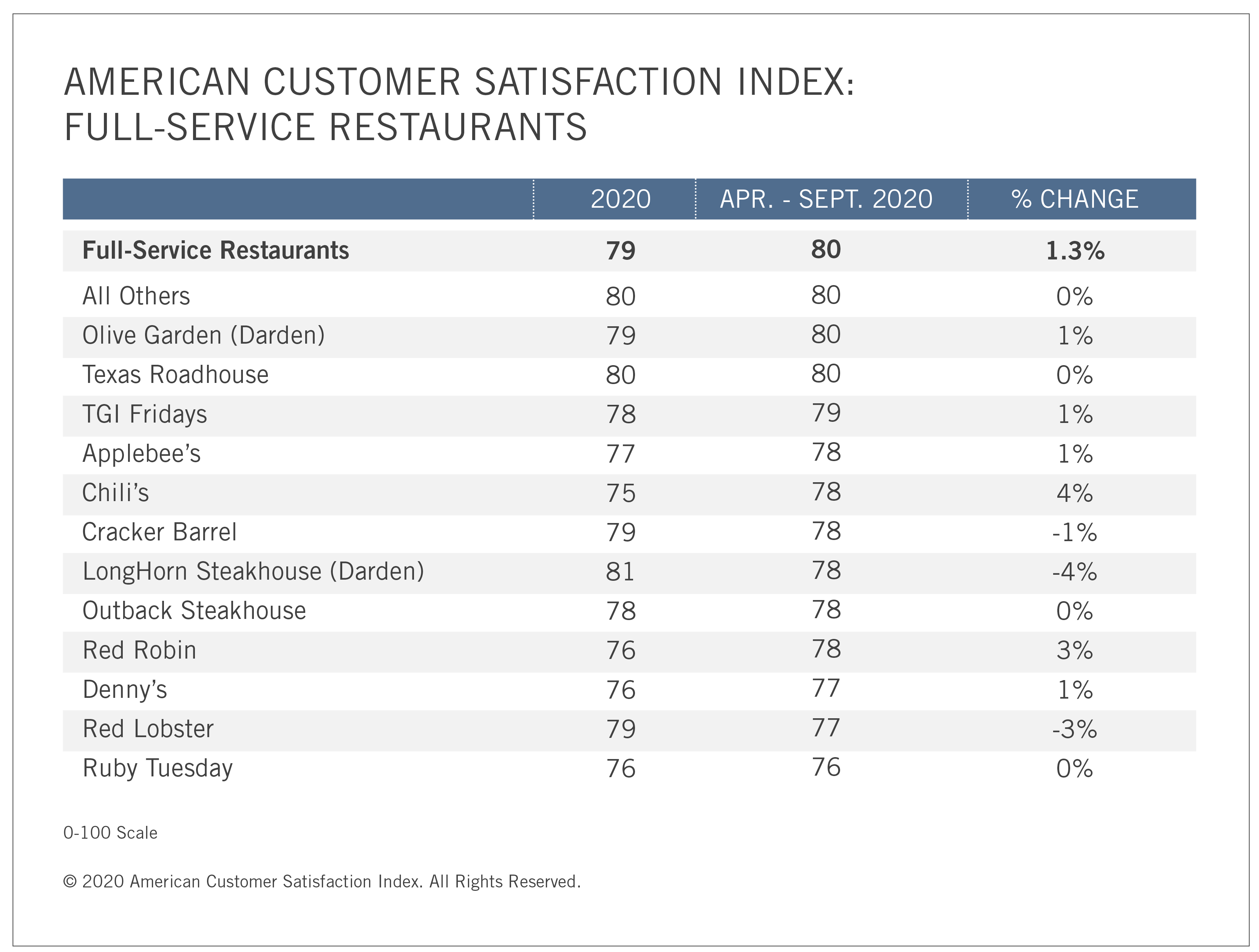 In Q1, Olive Garden’s take outside the four walls jumped 123 percent in the period, year-over-year, to 45 percent of total sales. Online business made up nearly 60 percent of that, more than tripling 2019 figures.

“We actually think that there is a big benefit in this consumer shift because we're going to take all these people that were in our dining room, I mean in our front door picking up food, and they will never enter our building again, which makes it a better experience for our dine-in guests,” Lee added. “... We think we can do curbside much more cost effectively than we can do picking up the food inside the restaurant.” Those savings will stem from efficiencies at Olive Garden. The difference of having five or six people standing at a bar top waiting for food versus a car pulling up.

If you take the take the first real pandemic-stricken week and compare it to the end of July, Texas Roadhouse lifted average weekly sales $60,650 while maintaining to-go mix of roughly 26 percent. Figures climbed from $55,000 in April to nearly $89,000 in June.

Texas Roadhouse CEO Kent Taylor said the brand is working on potential changes to its building prototype intended to further enhance its ability to handle higher to-go volume. So far, some include taking either all or part of waiting rooms and putting doors on them. Or a sticking a sliding window on them, with curbside walk-up to the window, 6 feet away from the next.

Essentially, it’s converting waiting areas and, in cases with an outdoor overhang (where Texas Roadhouse had some outdoor waiting space before) pushing the wall out. This way, there’s additional space for restaurants to execute to-go curbside. The other part is in prior waiting rooms, Texas Roadhouse can now store to-go supplies. And it’s also concepting the idea of putting a barn door that goes toward the lobby where a door can slide and transform the space into on-deck seating, or a waiting space for people who need it, like older guests.

TGI Fridays was next, lifting 1 percent to 79—ahead of six restaurants with scores of 78. Fridays has rolled no shortage of COVID response tactics throughout the crisis, like the take-home Butcher Shop program, where customers could order ready-to-cook meals like the "All-American Cheeseburger Kit," "Signature Whiskey-Glaze Burger & Chicken Sandwich Kit," and "Surf & Turf Kit” to-go. In-restaurant, Fridays created disposable, one-time-use menus that are extra-large (and heavy) and double as a placemat. So customers can dine-in without actually touching the table, if they so choose. Here’s more on the brand’s efforts.

Red Robin’s 3 percent jump represented the biggest leap in this study. It’s a positive reflection of an improved hospitality model management refers to as “TGX,” or total guest experience.

As of August, digital channels, including online ordering through Red Robin’s website and third-party marketplaces, were driving about 80 percent of business outside of dine-in.

CEO Paul Murphy said “resetting our operational focus” was a strategic imperative throughout COVID-19 for Red Robin. One key change: a smaller menu that’s trimmed 33 percent of options. The chain also dedicated additional space for off-premises assembly inside kitchens and implemented direct, or last-mile, delivery across all company stores and third-party systemwide.

One statistic, however, vividly captures the bizarre cadence of today’s restaurant dynamic for full-serves and what you’re seeing in ACSI’s study—Red Robin’s off-premises sales jumped 208.7 percent, year-over-year, to 63.8 percent of total food and beverage business. Just a quarter ago, it was 26.3 percent of mix. Pre-pandemic? A steady 14 percent. Meanwhile, Red Robin’s Q2 dine-in sales plunged 76.2 percent.

Despite this, Murphy said COVID-19 enabled Red Robin to improve the quality of operations and build trust and loyalty that will stick long after. That’s what restaurants are starting to get credit for, per ACSI. An omni-channel experience executed without friction.

Denny’s climbed a point to 77, joined by Red Lobster, which slipped 3 percent. Ruby Tuesday, currently in Chapter 11, sat at the bottom at 76.

And for quick-service chains …

Although more customers are carrying out food, those that do carry out remain less satisfied compared to customers dining and receiving delivery, according to the study. The latter two lead the way at 79, while carryout is unchanged at 76.

Broadly speaking, restaurants report better satisfaction from carryout and curbside when it comes to quality and accuracy (and value in the case of third-party delivery). So this discrepancy could probably be tied to overall delivery adoption and growing prevalence. And guests still not wanting to leave the house. Those who frequent delivery appreciate the convenience. Now, even more so if they fear for their personal safety.

Nine brands saw customer satisfaction slide during the pandemic—down from 11 before—while only four improved their scores. You also have to consider the surge of new customers into the segment. At times during COVID-19, quick-serves were the only game in town. Meaning ACSI’s 2019 survey versus today’s is a pretty different field. Not as many core customers as core-plus new ones today. 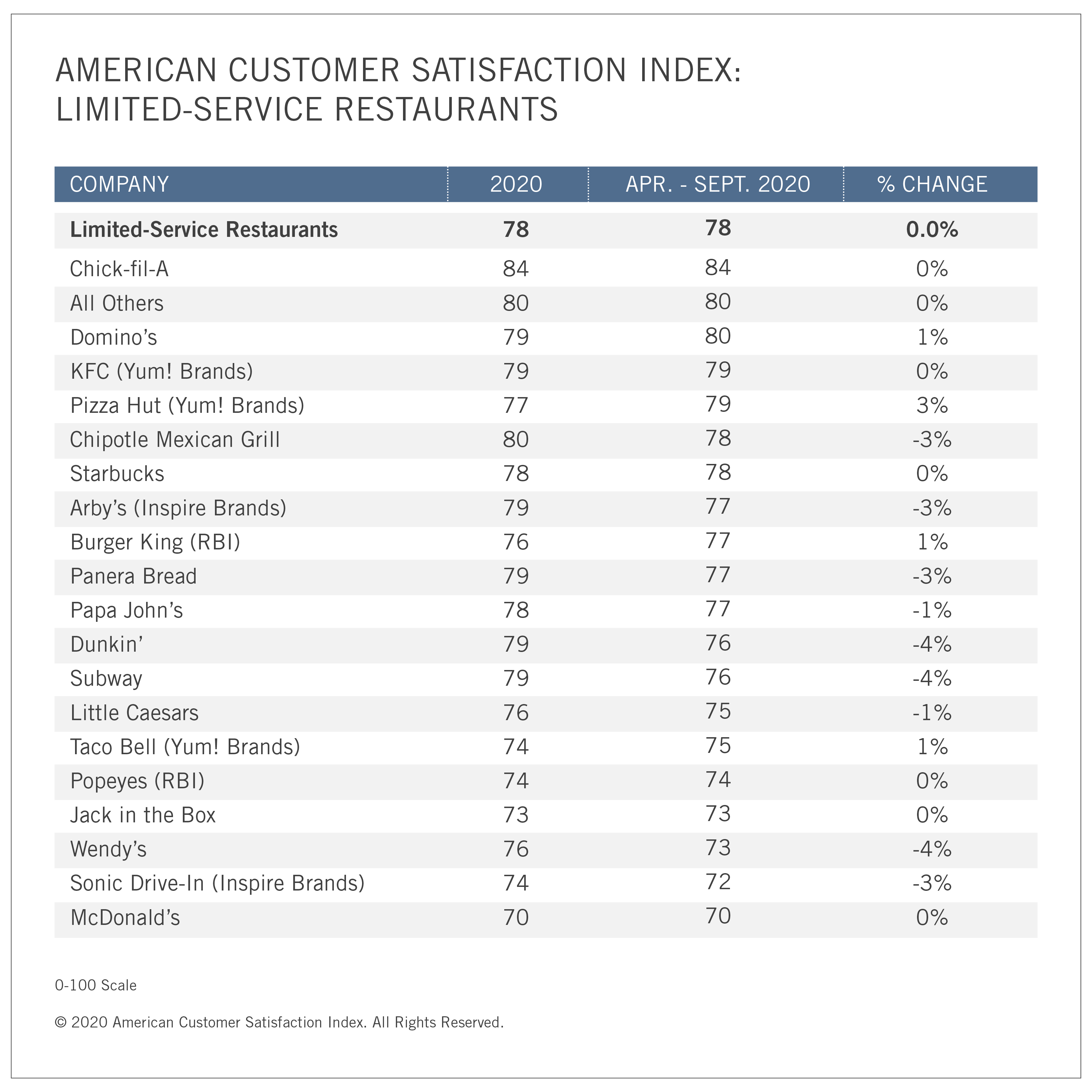 It’s been a reliable and well-positioned brand for guests to rely on if they’re trying to avoid crowds.

Chipotle fell 3 percent into a tie with Starbucks (unchanged) at 78.

Dunkin’ and Subway fell 4 percent to 76. Little Caesars (down a point) and Taco Bell (up a point) tied at 75. Popeyes (74 and unchanged) followed. Wendy’s dropped 4 percent into a tie with Jack in the Box (unchanged at 73). Both were ahead of Sonic Drive-In, down 3 percent ot 72. McDonald’s rounded out the list at 70.

In the 2019–2020 report, only overall mobile app reliability improved among quick-serves. Now, both mobile metrics are up, with mobile quality bumping 2 percent to 83 and reliability rising a percent to 82. 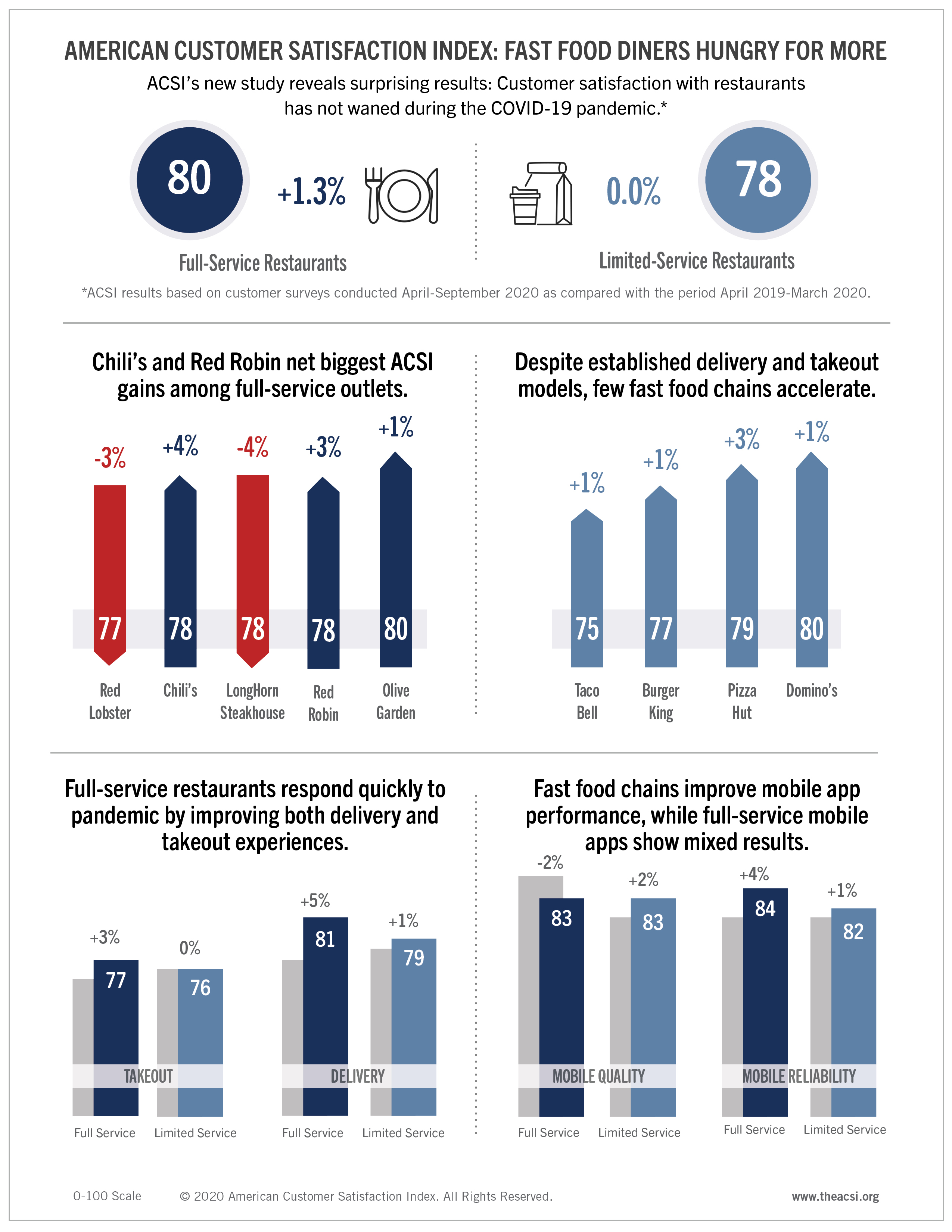